The La Niña pattern that settled over the United States last month stands to prop up gas demand this winter if the chilly forecast for the northern states holds true. 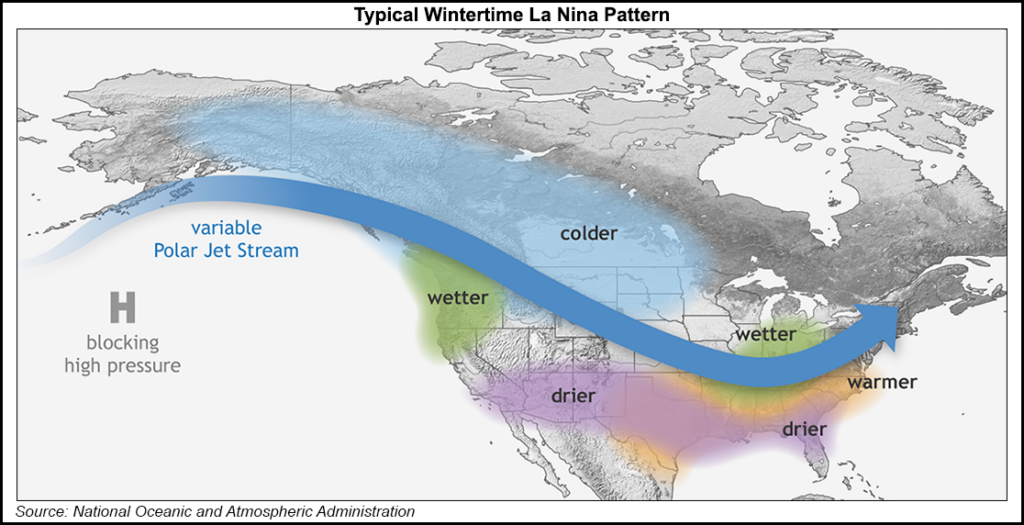 However, in an era in which Lower 48 demand is now largely influenced by dynamics overseas, the current lack of signaling for a cold winter in Europe puts U.S. liquefied natural gas (LNG) cargo cancellations back on the table by next spring.

On Thursday, the National Oceanic and Atmospheric Administration’s Climate Prediction Center said that La Niña conditions, characterized by below-average sea surface temperatures extending across the central and eastern equatorial Pacific Ocean, were expected to continue through the Northern Hemisphere winter. Under such conditions, the jet stream remains farther north which makes for chillier temperatures in the northern United States and warmer air farther south.

Bespoke Weather Services chief meteorologist Brian Lovern said the La Niña pattern has been building for months and was responsible for the strong summer heat the Lower 48 experienced in July and August. Normally, though, that heat extends into the fall season and early November, “which could become a big deal as we near the end of the storage injection season.”

After an exceptionally mild winter last year, and economic turmoil perpetuated by the Covid-19 pandemic, U.S. gas storage inventories have swelled far above historical averages. The latest Energy Information Administration report showed that inventories on Sept. 4 stood at 3,525 Bcf, which compares with the year-ago level of 2,997 Bcf and the five-year average of 3,116 Bcf.

“We have to get through fall before we get to winter, and I worry about the warmer, bearish weather during that time,” Lovern said.

Furthermore, while the “cookie-cutter” La Niña pattern portends colder opportunities in the North, there may be some variability. “It just depends on where the jet stream sets up, and it’s too early to determine that yet.”

U.S. gas demand should be stronger year/year, according to Lovern, although he wouldn’t completely rule out a repeat scenario of last year. “This has been a really tough climate regime to get sustainable colder weather. Will we get impulses? Yes, but then it completely fizzles. We have a very warm global pattern.”

With LNG export demand soaking up around 10% of U.S. production, how winter plays out overseas also needs to be considered. However, the odds for a cold winter in Europe aren’t very favorable either, at least for now.

In order for Europe to have a cold winter, the presence of atmospheric blocking is needed, according to Lovern. Last year, that blocking was absent and resulted in lower-than-normal gas demand and a slow drawdown in storage.

So far, there is little indication that blocking exists, and the forecaster, a former natural gas trader, said he’s hedging his bets for another warmer-than-normal winter in Europe.

Similarly to the United States, storage levels in Europe as well as North Asia are pretty full. NGI data showed European Union inventories at around 93% of capacity as of Sept. 9, which is slightly off from last year’s levels at this time but still well above the five-year average. Total stocks stood at 1,028.06 Terawatt hours.

Poten & Partners Head of Business Development Jason Feer said the key for winter always has been how long it is cold rather than how cold it is. A long, cold winter would produce significant demand and have the potential to drain storage inventories.

“If that happens, there will be more space to take additional supplies during the spring and summer, and that could take some of the pressure off prices.”

On the other hand, a warm winter like last year could result in a repeat of this past year when storage filled quickly, prices fell and lifters canceled several U.S. cargoes and deferred others in Asia. Some of those cargoes are lined up for winter delivery now, according to Feer.

The analyst sees the supply overhang possibly resuming by the end of the first quarter of 2021 as warmer temperatures cut demand. Greater storage availability may help by providing a home for at least some of that surplus, but Poten & Partners’ current forecast is that there would likely need to be U.S. cancellations in 2021, “though not as many.

That number will depend in part on how much storage capacity is available,” Feer told NGI.

Waddell agreed that even in a cold-winter scenario, Europe would struggle to absorb all the LNG supply not taken by other markets and sees cancellations occurring next summer.

Meanwhile, in Northeast Asian, a reversion to a normal winter would add around 1.3 million tons of demand in the residential-commercial sector alone, according to Waddell.

“Strong demand in Northeast Asia would leave Europe with less LNG, although we are still forecasting year/year growth in Europe’s LNG imports in 4Q2020,” the analyst told NGI.