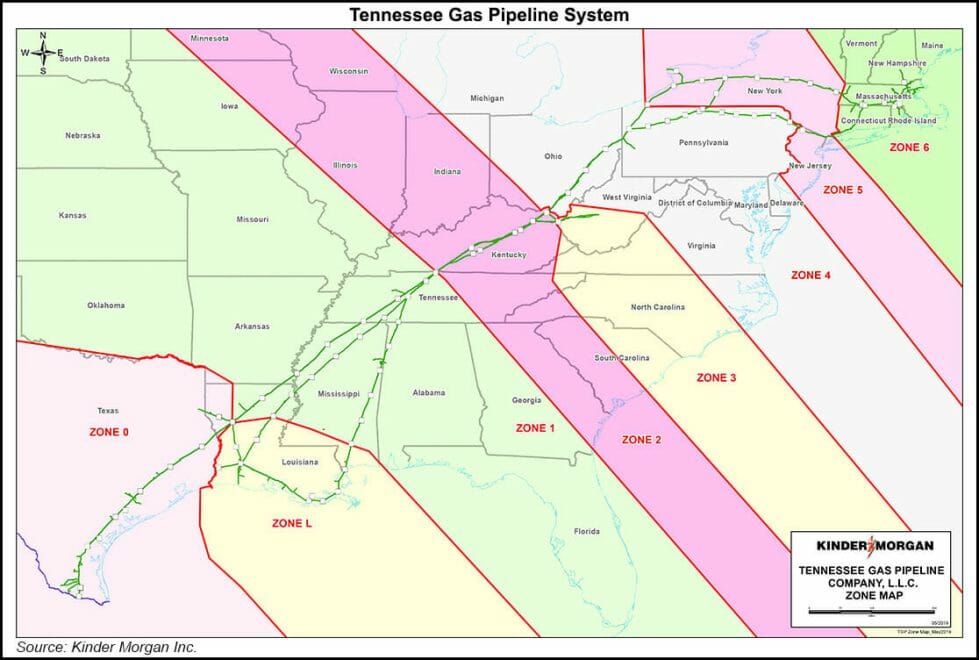 TGP would be the first pipeline system to offer the RSG supply aggregation pooling service, according to Kinder Vice President of Commercial Ernesto Ochoa. He told NGI that methane intensity has been a concern for the midstream company for years. As the market for certified gas began to develop, Kinder management recognized an opportunity to provide a transparent trading place for buyers and sellers.

“As the buzz started getting out there, with RSG” and renewable natural gas, “some of the producers, particularly in Pennsylvania and the Marcellus, started approaching us about it,” Ochoa said.

At the same time, LNG producers, power generators and local distribution companies (LDC) were looking to source RSG in a bid to lower the carbon intensity in their operations. However, transactions so far “have been few and far between — and bilateral,” according to Ochoa. “There is no transparent platform. Pools bring that transparency.”

Kinder management examined its vast network of pipelines, which altogether transport about 40% of the natural gas consumed in the United States, and chose TGP for its connectivity to key basins and end-users. The pipeline transports gas from the Northeast to end-use demand markets including New York City and Boston. It also serves the Gulf Coast and Mexico.

The midstreamer created five pools that are co-located with existing pools to make it easy to get transactions done, but without hurting liquidity at the existing pools, Ochoa said. The pooling locations also capture supply from some of the largest basins in the United States.

The five designated pooling areas for the TGP system are:

“We were very methodical in our approach,” Ochoa said. However, the RSG service may be expanded to include other pooling locations based on market demand.

“We’ll be flexible. We’ve given ourselves the flexibility to change,” Ochoa said of the proposal filed with the Federal Energy Regulatory Commission.

Under the plan, the natural gas offered in the pooling service would be certified by independent auditors MiQ or Project Canary’s Trustwell certification system as meeting certain environmental, social and governance standards, including reducing methane emissions. For gas to be included in the pooling service, it would need to meet a methane intensity of 0.2% or lower, according to Ochoa. However, that threshold could become lower as the market develops, he said. In addition, Kinder Morgan may expand the number of certifying companies it uses for the RSG pooling service as it becomes more widely used.

“We’re leaving ourselves the flexibility to evolve,” he said.

Producers that have already obtained certifications from qualified third-party organizations are expected to supply the certified gas for the proposed pooling service, according to Ochoa. Southwestern Energy Co., for example, began moving certified gas supply to the Northeast on TGP beginning in November.

Southwestern in June became the first U.S. exploration and production company to announce that it would certify all of its Appalachian gas as RSG by the TrustWell system.

Meanwhile, other producers are working to certify their output, including Chesapeake Energy Corp., EQT Corp. and recently, BP plc. ExxonMobil has a partnership with MiQ to certify about 200 MMcf/d from its Poker Lake, NM, facility in the Permian Basin.

These certified supplies are expected to grow as “RSG becomes the fuel of choice among customers,” according to Ochoa. “We believe this lower methane intensity fuel is an essential component of the energy transition.”

RSG transactions via the pooling service may be short term, seasonal or longer term in nature, according to Ochoa. The price for the RSG would be determined by producers that would have to decide “how much they’re willing to give” and by “how much LDCs can take and pass on. We’re just scratching the surface,” Ochoa said. “Hopefully, these pools will give you that transparency.”

As the certified market continues to develop, Kinder plans to look at “every pipeline in our stream” to determine whether the pooling service can be replicated. Eventually, though, pooling services may not be needed at all, according to Ochoa, “because all gas is RSG. And that would be a good thing.”

Kinder expects the RSG pooling service on TGP to be available before the end of March, pending FERC approval.Another midstream heavyweight, Williams, also has outlined its strategy to capture opportunities from low- and net-zero carbon fuels. At the LDC Natural Gas Forum held in October, Angela John, who joined Williams as Business Development director for the company’s New Energy Ventures unit, said the initial RSG focus by Williams “will likely be in the Haynesville Shale.” The effort then would be expanded for gas transported by the behemoth Transcontinental Gas Pipe Line, aka Transco. “But I see it very quickly being deployed across all of the asset footprint.”