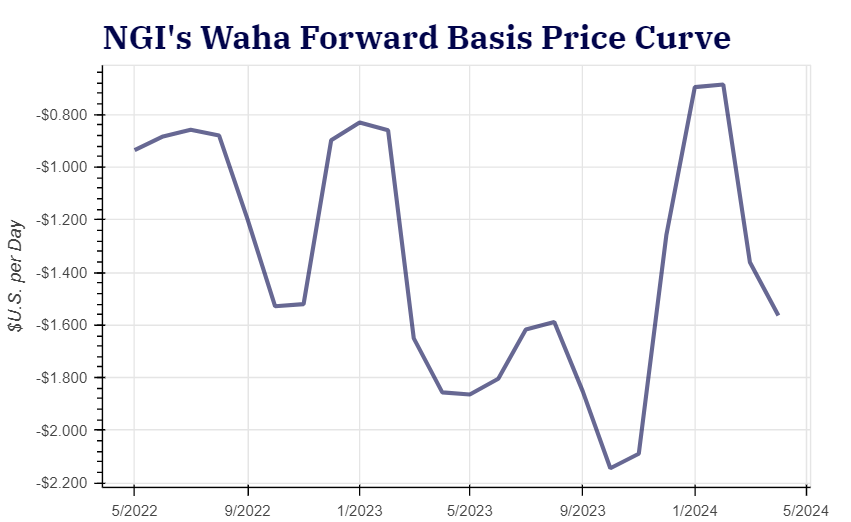 “Combined, the two expansions can add 1.2 Bcf per day of capacity out of the Permian,” CEO Steven Kean told analysts Wednesday during a conference call to discuss first-quarter earnings.

Once a final investment decision (FID) is taken, KMI estimates the expansions could be in service within 18 months, meaning they may be online as soon as 4Q2023, management said.

“We believe the market will need that capacity in that timeframe and see one or both of these expansions as the near-term solution, pushing out our potential greenfield third pipeline further in time,” Kean explained.

Achieving a 2023 in-service date “will really help alleviate a containment issue that we’re starting to see now and certainly expect to get much worse as we get into 2023,” said KMI’s Tom Martin, president of natural gas pipelines.

Martin said the firm expects a greenfield pipeline to be needed in the Permian by 2026, “which would lend itself toward” an FID by “sometime early next year with that kind of a project.”

In addition, KMI is looking into a small-scale expansion at its Elba Island liquefied natural gas (LNG) terminal, Martin said. While it’s still early days in terms of greenlighting an expansion, “the market opportunity suggests there may be something worth looking at,” he told analysts.

‘A Good Time To Be Long’

Kean and Martin shared a microphone with executive chairman Rich Kinder, who reflected on the energy implications of Russia’s invasion of Ukraine.

“This crisis has demonstrated the continued dependence of the world on fossil fuels, especially natural gas, and the inability to develop a satisfactory substitute in the short to intermediate term,” said Kinder. “This situation is illustrated by the frantic efforts of Europe to wean itself from its overwhelming reliance on Russian natural gas.”

He added, “I anticipate that all of our present LNG export facilities will be running at capacity for the foreseeable future, and the contracts necessary to support the construction of new facilities in the next few years will be more attainable than they’ve been in the past.”

Although the Biden administration recently granted approval for two liquefaction expansion projects on the Gulf Coast, Kinder warned that LNG projects could still be bogged down by permitting delays.

“By way of caution, I’m still concerned that our federal government will not properly expedite the permitting of these new facilities, but I’m reasonably hopeful that at some point this administration will recognize the importance of playing its energy card to support its allies and sanction its adversaries,” Kinder said.

“The impact of these developments will benefit the midstream energy segment, and Kinder Morgan specifically, in both the short term and the long term.”

He noted that KMI moves about 40% of all the natural gas in America and about 50% of the gas going to LNG export terminals.

“As volumes increase, throughput will increase, as will the need for selective expansions and extensions of the network. In short, it’s a good time to be long natural gas infrastructure.”

Deliveries to LNG facilities off KMI pipes averaged about 6.2 million Dth/d during the first quarter, up 32% year/year, said President Kimberly Dang. Pipeline gas exports to Mexico dropped versus 1Q2021 as a result of third-party pipeline capacity added to the market, she said.

Deliveries to power plants, meanwhile, were up 5% versus the year-ago period, “and we believe that natural gas power demand is becoming more inelastic relative to coal,” Dang said. Deliveries to utilities and industrial consumers also increased.

For full year 2022, gathering volumes are on track to grow by more than 10%, which Dang said exceeds guidance.

The Stagecoach acquisition announced in June 2021 “is fully integrated with our commercial and physical operations, producing the commercial opportunities we expected, and exceeding the acquisition model,” Kean added.

These increases were partially offset by declines on the El Paso Natural Gas (EPNG) system because of pipeline outages, and on Wyoming Interstate Company and Cheyenne Plains Gas Pipeline “due to continued declining production in the Rockies basins.”

“In addition to commodity price tailwinds, we experienced very strong commercial performance in our gas business with continued improvement in our contract renewals, especially on our flexible gas storage services, good performance during the winter and new emerging project opportunities in our Bakken, Haynesville and Altamont assets and increasing interest in new Permian transportation capacity,” said Kean.

How is KMI Tackling Emissions?

KMI on Thursday also announced its participation in a project led by Cheniere Energy Inc. to improve the overall understanding of greenhouse gas (GHG) emissions and further the deployment of advanced monitoring technologies and protocols. “The project includes several other midstream operators and leading academic institutions, and is focused on quantifying, monitoring, reporting and verifying GHG emissions associated with the midstream sector,” KMI said.

“We are seeing great opportunities, both in our traditional segments and in our growing participation in the low-carbon energy evolution,” said Kean. “While we are benefiting from commodity price tailwinds, we are also performing better than budget in a number of areas, which is more than offsetting some higher cost headwinds.”

The chief executive said KMI is “seeing growth in our base natural gas business as more customers seek to take advantage of the extensive firm transport and storage services we offer. That growth is coming from favorable renewals, especially on our flexible storage services, and from incremental growth opportunities.”

He added, “We continue to leverage our status as a low methane emission intensity leader within our sector as interest in responsibly sourced natural gas grows within our customer base.” Renewable natural gas also “is presenting good additional growth opportunities.”

Management said that KMI’s 1Q2022 earnings would represent a year/year improvement if not for the one-off favorable earnings impact of Winter Storm Uri in the year-ago period.