June natural gas futures on Tuesday barely extended a win streak to three days as traders took profits and volume proved light while the prompt month tested technical resistance at the $3.00 level. Futures advanced over the course of April and early this month as supply/demand balances tightened. 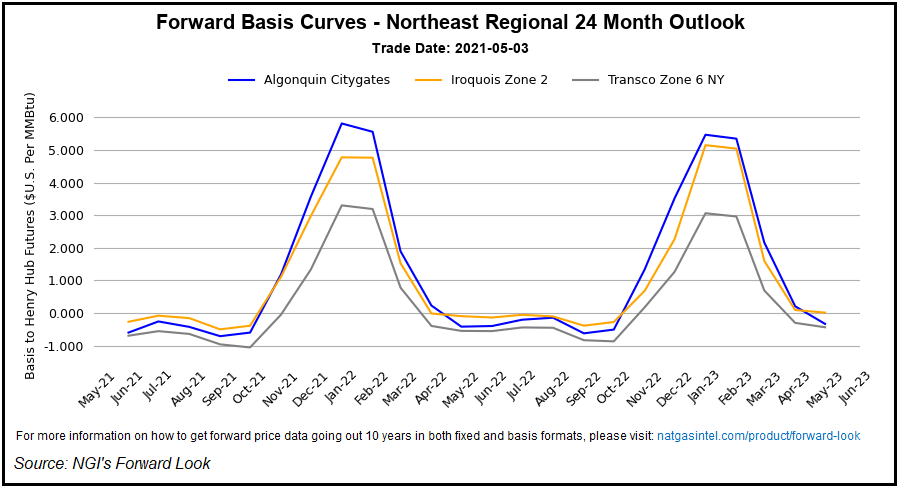 “While the natural gas rally has proven robust over the past month, technical resistance may impede the way higher,” said EBW Analytics Group analysts. “It could take multiple tries to overcome the $3.00 level.”

“At the same time, this fundamentally led rally was initiated by strong late-summer and winter contracts that are likely to hold up the front of the strip,” the EBW analysts added. “With upside momentum potentially slowing and the downside limited, range-bound trading remains the most likely near-term scenario for the June contract.”

Tuesday’s trading opened after the overnight weather forecast shifted cooler and heating demand expectations for this weekend into next week increased, according to NatGasWeather.  The firm, however, noted at this time of year, traders begin to shift their focus to early-summer cooling demand.

Heating degree days “are solidly above normal the next 10 days,” but “this late in the heating season, it won’t drive nearly as much demand compared to the core winter months,” NatGasWeather said. “…We continue to wait on more impressive, sustained heat to build over the U.S., and we expect it won’t occur until late May.”

The next potential catalyst for prices may be the weekly natural gas storage report by the U.S. Energy Information Administration (EIA) set for release Thursday.

Last week’s report showed a 15 Bcf build in inventories for the week ended April 23. That was far lighter than historical injections. U.S. inventories stood at 1,898 Bcf, which was 302 Bcf lower than a year earlier and 40 Bcf below the five-year average.

Analysts are generally expecting a more significant increase in stocks with this week’s report, though the injection could once again prove modest relative to historic norms.

NGI’s model predicted a 76 Bcf injection for the week ended April 30. A preliminary Bloomberg survey showed injection estimates ranging from 49 Bcf to 76 Bcf and a median of 69 Bcf.

The estimates compare with a 103 Bcf build recorded in the comparable week of 2020 and a five-year average injection of 81 Bcf.

Energy Aspects issued a preliminary estimate for a 58 Bcf injection, though its analysts cautioned that recent EIA reports have missed expectations by substantial margins.

Looking ahead, however, analysts are generally optimistic about natural gas demand heading into summer. LNG exports to Europe and Asia are holding strong, and consistent cooling demand is expected to kick in later this month.

Increasing expectations for an end to the pandemic also are fueling hopes for increased commercial demand, as more businesses fully reopen and energy needs increase.

There were an estimated 50,000 new coronavirus cases reported in the United States for Monday, according to data reported Tuesday that was compiled by Johns Hopkins University. That was down from nearly 57,000 a week earlier. The U.S. Centers for Disease Control and Prevention reported that more than 40% of adults in the country are now fully vaccinated.

While the pandemic continued to rage in parts of the world, “vaccination campaigns are progressing and should allow key economies to increasingly open up again for both more business and travel,” driving more energy demand, said Rystad Energy analyst Louise Dickson.

Next-day cash prices on Tuesday extended the double-digit gains of a day earlier as hubs in the central and eastern United States stocked up for unseasonably cool weather this week.

“National demand will increase the next few days as a late season cold shot with showers and thunderstorms advances out of the Plains” to parts of the south and eastward, “with cool highs of 50s and 60s” and lows in the 30s and 40s, NatGasWeater said. In the West, hubs “will see a mix of mild conditions over the Northwest, with highs of 50s and 60s, but very warm to hot over the Southwest with highs of 80s to 90s.”

Price gains on Tuesday were most pronounced in Appalachia, where Millennium East Pool jumped 77.0 cents day/day to average $2.205. Transco-Leidy Line spiked 55.0 cents to $2.050.

On the pipeline front, planned maintenance on Empire Pipeline in southwestern New York was to lead to northbound flow cuts of up to 255 MMcf/d on Wednesday and Thursday, Wood Mackenzie estimated. Over the past 30 days, the firm said, flows have averaged 612 MMcf/d and maxed at 640 MMcf/d.

Separately, Columbia Gas Transmission (TCO) said planned maintenance on Line 1983 initially scheduled to begin Tuesday was postponed to next week because of inclement weather. The project is now scheduled to start next Tuesday (May 11) and wrap up May 13. The work could limit up to 201 MMcf/d of receipts in Wetzel County, WV.

The Smithfield-Mobley gas processing plant is expected to be shut in for the duration of the maintenance work. Over the past 30 days, Wood Mackenzie said, Smithfield-Mobley averaged 170 MMcf/d with a maximum of 201 MMcf/d.