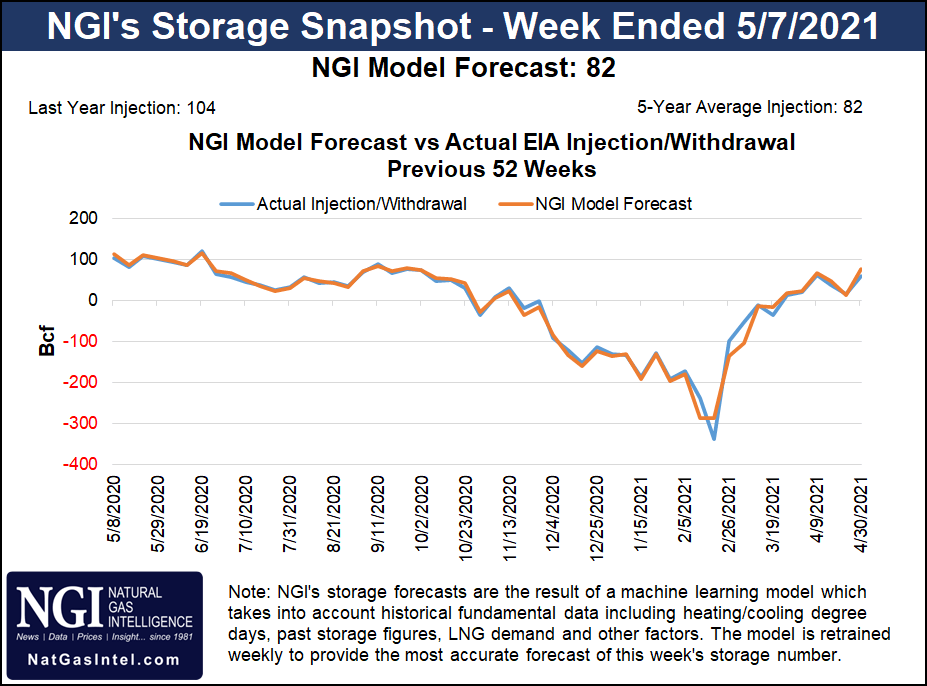 While always subject to revisions, production estimates at the start of trading Wednesday hovered around 89 Bcf, roughly 1 Bcf below recent averages and well below pre-pandemic levels. At the same time, LNG feed gas volumes hung near 11 Bcf, far above year-earlier levels. Both Asian and European demand for U.S. exports of the super-chilled fuel is expected to hold strong through the summer cooling season.

European gas storage was depleted over a freezing winter and chilly spring, driving demand and higher prices for U.S. LNG. Elevated needs in Europe are boosting prices – and near-term demand – in Asia as well, as traders pay up to attract shipments, according to analysts.

U.S. LNG export terminals “are running at their operationally available and contracted levels and will continue to do so, with no economically driven cargo cancellations anywhere on the horizon,” RBN Energy LLC analyst Lindsay Schneider said Wednesday. “Global gas prices are well supported by low storage levels in Europe, and it will take time to refill inventories, which means these high prices are not going away anytime soon.

“The upshot: U.S. LNG will have a very different kind of summer than it did last year, when global prices were at historic lows and many U.S. terminals saw more cargo cancellations than exports,” Schneider added.

Feed gas last month averaged 10.77 Bcf/d, nearly 3 Bcf/d higher a year ago, she said. “As we progress into summer, the year-on-year delta will become even more pronounced. Barring any major operational issues, feed gas demand will stay around 11 Bcf/d, which is the level needed for the terminals to produce at full capacity.”

NatGasWeather on Wednesday said the American and European weather models both “held a bearish U.S. pattern” for Friday through May 25 that would see “only localized heat” over southern parts of the country. The upcoming pattern is especially bearish starting this weekend through next week, when comfortable temperatures are to permeate the Midwest and East, according to the firm.

“The southern U.S. becomes warm to very warm with highs of 80s to 90s,” NatGasWeather said, but it may not be enough to minimize storage injections in May. “The coverage and intensity of highs reaching the 90s over the southern U.S. still isn’t expected to be as widespread as needed to intimidate through May 26 and should result in several large weekly builds near or over 90 Bcf.”

Looking ahead to Thursday’s Energy Information Administration (EIA) weekly inventory report for the week ended May 7, Energy Aspects issued a preliminary estimate for an 85 Bcf injection. The firm estimated a 0.7 Bcf/d week/week decrease in production for the period. However, this was more than offset by a nearly 4 Bcf/d loss in residential/commercial and industrial heating demand, the firm said.

Major polls are also showing expectations for a notable increase.

The average forecast of 13 analysts participating in a Wall Street Journal survey landed at 73 Bcf. Estimates ranged from increases of 68 Bcf to 79 Bcf.

EIA is scheduled to release its storage data at 10:30 a.m. ET Thursday.

Meanwhile, Colonial Pipeline Co., which moves about 45% of the East Coast’s gasoline, diesel and jet fuel, remained shut down during market hours on Wednesday – its sixth day offline — after hackers broke into the company’s servers and demanded a ransom. The outage resulted in fuel shortages in the East and higher gasoline prices this week.

While the Colonial system does not transport natural gas, the cyberattack raised questions about the vulnerability of the U.S. energy system to future attacks and weighed on markets early in the week.

After markets closed on Wednesday, Colonial said it had launched the restart of pipeline operations around 5 p.m. ET, but “it will take several days for the product delivery supply chain to return to normal.”

However, the issues around the impact still lurk as a threat, analysts said, as near-term challenges mounted while the pipeline is set to remain at least partly offline in coming days.

The average retail price of U.S. gasoline has spiked above $3/gallon this week, near a seven-year high. Additionally, “we are seeing increased rates for both tankers and floating storage” along the Gulf Coast, “as refineries do their best to keep the flow of oil going.”

Dickson noted that the U.S. Department of Energy expressed confidence that a supply crunch could be avoided by providing refined oil products to regions affected by the pipeline closing either by truck or vessel. “But both pose their own logistical challenges. Shipping oil by vessel from the Gulf Coast to the Southeast and Northeast is not only expensive and takes longer, but there also isn’t a large flotilla of tankers ready on such short notice…

“There could be a similar constraint on the transport of oil products by road – the Covid-19 crisis resulted in many oil-truck drivers losing their jobs, so there could be a shortage of qualified labor,” Dickson added. “If the bottlenecks cannot be solved domestically, then the U.S. will need to turn to Europe for imports, though a turnaround of at least one week makes this a risky play.”

Spot gas prices slumped for a second-consecutive day, led lower by declines in the East and swaths of Texas as high temperatures settled in the comfortable 60s and 70s, minimizing demand.

NatGasWeather said there was potential for regional heating demand on Thursday, as cool shots dot the Midwest and Northeast landscapes, with potential lows in the 30s and 40s.

Overall demand, however, could remain modest. “Cooling has also pushed into Texas, the South and Southeast along with showers and thunderstorms that will continue through the weekend, with highs of 70s to low 80s for light demand,” NatGasWeather said.

For the weekend, the West “will be warm to very warm with highs of 60s to 100s, hottest in the California and Southwest deserts,” the firm added. Still, this could be offset by comfortable highs in the 70s and low 80s across the northern and central United States.

Looming front-month expiration helped spark a massive surge in natural gas futures prices in early trading Monday. The expiring October Nymex contract was up 32.4 cents to $5.464/MMBtu at around 8:50 a.m. ET; November was up 32.8 cents to $5.528. Higher prices at European benchmarks and the impending expiration of the October contract appeared to…