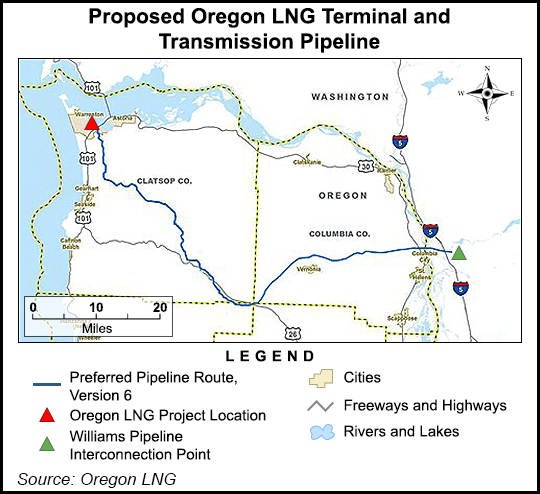 Jordan Cove LNG endured two postponements of the final EIS earlier this year (see Daily GPI, June 12), mostly because of an ongoing debate over a locally backed alternative route to a portion of the project’s proposed connecting transmission pipeline, Pacific Connector, which is a partnership between a unit of Veresen and the Williams Companies Inc.

Under the current permitting schedule at FERC, Jordan Cove and the Pacific Connector transmission pipeline are scheduled for a final decision by Dec. 29, a Veresen spokesperson said. Veresen will make a final investment decision on the $7.5 billion project next summer, following an expected “notice-to-proceed” from FERC.

Veresen CEO Don Althoff called the final environmental document “a significant regulatory milestone,” saying project representatives have been working with federal, state and local agencies and local communities during the past three years to fashion the final EIS. Althoff said the terminal and 232-mile 36-inch diameter pipeline will meet or exceed all the required environmental standards.

The latest action “paves the way for Jordan Cove to be the first LNG export facility to be built on the West Coast,” according to Elizabeth Spomer, CEO of Jordan Cove LNG. “This regulatory milestone will be viewed as great news to our customers.”

Jordan Cove expects to get supplies from both western Canada and the U.S. Rockies. It is seeking a Canadian National Energy Board (NEB) export license. Project backers have told the NEB that most and potentially all of its LNG will be made from Canadian-sourced gas.

Veresen-Jordan Cove’s target supplies can travel most of the way to the proposed Oregon terminal on current export legs in the TransCanada and Spectra pipeline systems between BC, Alberta and the U.S. Pacific Northwest. Its proposed Pacific Connector pipeline link will interconnect with the established pipeline grid at Malin, OR, near the Oregon-California border, a hub for both Canadian and Rockies supplies.

Jordan Cove, if built and operated, would be among the largest commercial ventures in Oregon’s history. A second export project, Oregon LNG, at the mouth of the Columbia River on the Oregon side is still awaiting its final FERC EIS, after finishing a series of public hearings on its draft EIS earlier this month.