The backers of the only U.S. West Coast liquefied natural gas (LNG) project still alive, Calgary-based Veresen Inc., is talking to a third prospective Japanese buyer and is considering selling up to a 40% equity interest in the project to offtakers, including two already signed to term sheets, according to company officials. 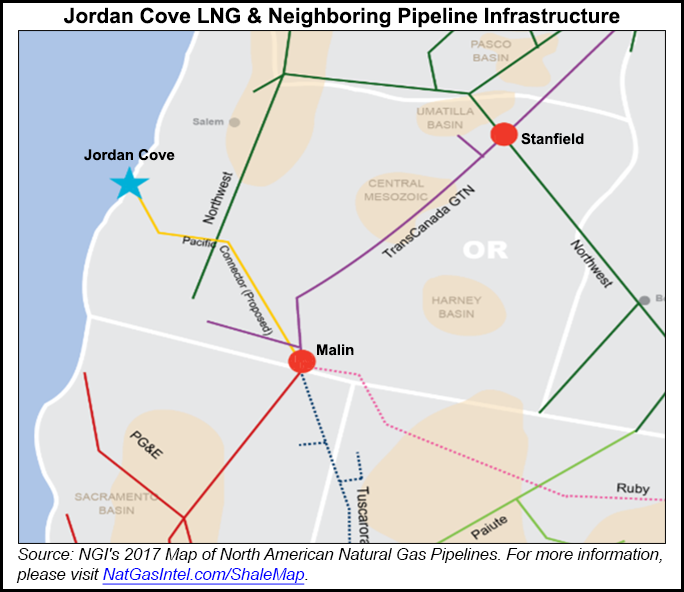 Recently granted a pre-filing status by FERC, Jordan Cove plans to re-file its application in the second half of this year. Its executives’ encouraging words in Japan came at the same time the global supply of natural gas is getting even more saturated and there are more doubts about the viability of additional long-term LNG contracts.

In Japan, Betsy Spomer, CEO of Jordan Cove, made clear that the Canadian oil/gas infrastructure company is seriously looking at the equity offering to a potential Japanese buyer, and to the Tokyo-based electric utility joint venture JERA Co. Inc. and Itochu Corp., who last year signed long-term capacity agreements. Ideally, Veresen wants to have 6 million tons of LNG/year under contract before making a final financing decision on Jordan Cove, Spomer said.

The fact that Qatar recently announced it was lifting a long-standing moratorium on development of part of the world’s largest gas field and the prospective deals are looking at shorter-term contracts does not deter Veresen or Jordan Cove, according to a company spokesperson.

“There are a bunch of Qatari gas contracts with Japan that are rolling off so whether it will be added supplies or just replacement is not clear, and the Japanese these days are looking very much for diversification of supply sources,” the spokesperson said. “Security of supply is a big issue, and they don’t have a lot of supply coming from North America yet, but they are trying to build that portfolio, and that is where Jordan Cove comes in.”

The other advantage for North American supplies is that the Japanese can actually own reserves and have a better grasp of the value chain, according to the spokesperson. “Ownership of the reserves to the transportation in the shipping is possible over here, whereas with Qataris, they are just a customer.”

Veresen CEO Don Althoff told the Tokyo conference that in addition to JERA and Itochu each taking 1.5 million tons annually of LNG, collectively half of Jordan Cove’s expected capacity, his company is talking to a third Japanese buyer to sell them 1-2 million tons annually. Althoff said the latest talks are in the advanced stages.

“All buyers are interested in taking some equity part of the plan,” he said.

JERA reportedly has identified a need for more LNG starting in 2024, which is most likely the earliest that Jordan Cove could come online, given its pre-filing status at FERC, the Veresen spokesperson said.

“There have been a couple of things that have happened on the contracts that make us more positive on that front, and on the regulatory front we seemed to have garnered the support of the White House as one of three projects they feel have been mired in red tape, so that is also potentially helpful.”