Natural gas futures found fresh footing on Tuesday, with the January contract rebounding in its first session as the front month on production drops, rising railroad strike fears and expectations for stronger demand in the month ahead. 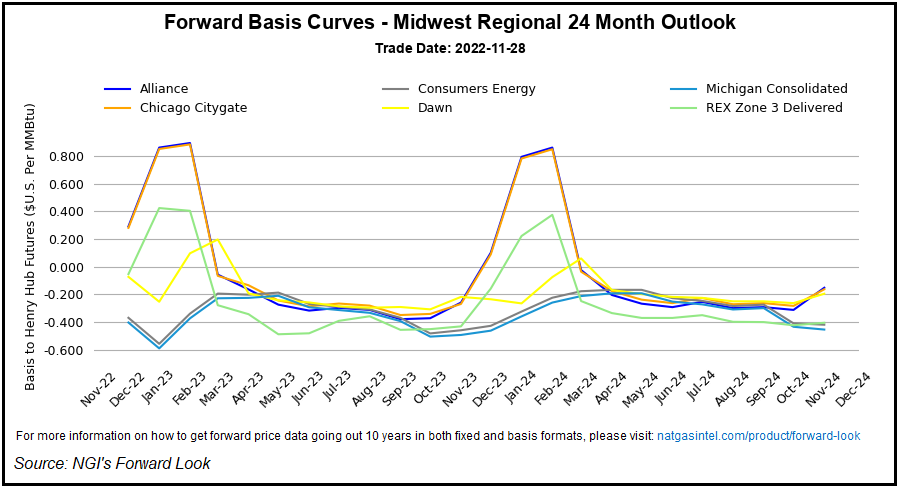 DTN’s weather data showed new bouts of cold and windy wintry conditions pushing from the West into the Midwest Tuesday and Wednesday. Mild conditions were expected across much of the East through mid-week, but frosty air and winter storms then were expected to expand from the nation’s midsection through the Great Lakes to the East Coast by late in the week, driving strong heating demand.

Benign conditions were forecast to return to the East and South early next week before another round of cold pushes across the Lower 48 by mid-December.

The anticipated restart of the Freeport LNG facility in December would add another bullish undercurrent, Allen added. Management of the liquefied natural gas facility, forced offline in June following a fire, expect to complete repairs by the end of this month and targeted a mid-December relaunch.

The company hopes to ramp up to 2 Bcf/d of production capacity by January. This could pull gas from domestic supplies to meet robust European and Asian demand for American exports, likely adding upward pressure on prices, Allen noted.

“Our forecast is slightly conservative and estimates a partial restart by mid-January, 85% utilization (2.0 Bcf/d) by the end of January 2023 and full utilization (2.38 Bcf/d) by March 2023,” Allen said. “Should this restart timeline be verified, it would provide bullish sentiment and an upward trajectory for prices in the first quarter, a period that historically has been prone to supply disruptions due to winter weather impacts.”

What’s more, barring an agreement between management and railway unions by Dec. 8, a worker strike could follow. This would substantially curb coal deliveries and drive demand for gas as a substitute.

“Along with the myriad of supply chain implications a strike would induce across all industries, the risk of a temporary or prolonged reduction (or complete halt) in coal deliveries would consequently increase the usage of gas, particularly for power plants with the ability to switch from coal,” Allen said.

Production, meanwhile, is proving choppy through the final days of November. After approaching 102 Bcf/d last week – near a record level – and holding close to that mark to start this week, output declined notably on Tuesday.

Wood Mackenzie analyst Laura Munder said output fell 1.6 Bcf/d to 98.9 Bcf/d. “The declines are concentrated in Texas and North Louisiana, where there are maintenance events or operational issues underway,” she said.

This work includes a weeklong project launched by El Paso Natural Gas Co. on Monday. It planned electrical unit maintenance at the Waha station in Texas, cutting up to 138 MMcf/d in regional flows. This work coincides with ongoing solar unit repairs at Waha that has constrained flows by another 159 MMcf/d early this week, according to Wood Mackenzie.

With demand strengthening and production uneven, analysts are looking for a large storage withdrawal with this Thursday’s Energy Information Administration inventory report.

NGI forecast a pull of 89 Bcf for the week ended Nov. 25. That compares with a decrease of 54 Bcf during the similar week of 2021 and a five-year average withdrawal of 34 Bcf.

The median of early estimates submitted to Bloomberg landed at a 79 Bcf pull, while Reuters’ preliminary polling found an average prediction of a 103 Bcf withdrawal.

EIA printed a pull of 80 Bcf natural gas from storage for the week ended Nov. 18.

The result compared with a decline of 14 Bcf in the year-earlier period and a five-year average decrease of 48 Bcf. The withdrawal lowered inventories to 3,564 Bcf, leaving stocks below the 3,626 Bcf level a year earlier and the five-year average of 3,603 Bcf.

Spot gas prices shot higher across the Lower 48 on Tuesday, bolstered by the combination of production interruptions and intensifying winter demand.

AccuWeather meteorologists said Tuesday that a storm system affecting parts of the West and Plains early this week was expected to spread and trigger blasts of snow and cold in the Midwest and strong, chilling winds as well as thunderstorms in areas of the South.

The wintry conditions were forecast to spread to the Northeast later in the week, AccuWeather said, with winds strong enough to cause power outages in some markets and temperatures low enough to induce wellhead freeze-offs in natural gas production zones.

In total, AccuWeather estimated, more than 125 million people from the Midwest to the Northeast could face disruptive wind gusts. Coastal markets could see flooding at times of high tide in the Northeast, the firm added.

“A surge of bitter air from Canada will work its way in and make many areas feel more like the dead of winter rather than late November,” AccuWeather Meteorologist Mary Gilbert said.