Global natural gas use is poised to decline this year as Covid-19 has cut into demand, but a quick recovery could be likely, driven by favorable economics, increasing access to the fuel and longer-term emissions reduction targets, according to the International Gas Union (IGU). 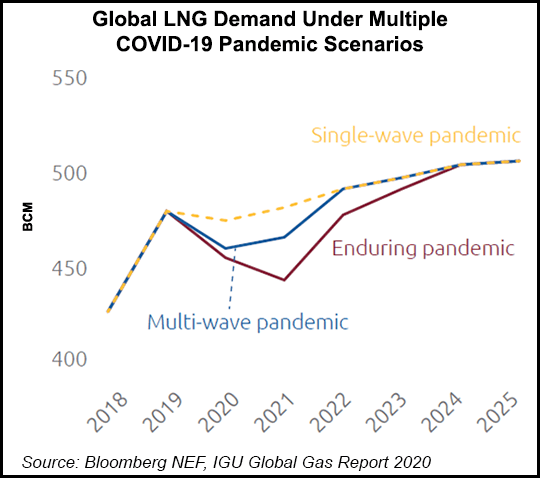 According to IGU’s latest Global Gas Report, developed with Bloomberg New Energy Finance and Italian infrastructure firm Snam SpA, worldwide gas use is set to fall by 4% this year after growing by more than 2% in 2019.

However, low gas prices, along with more clean air and climate policies, are likely to prompt further switching to gas from other more polluting sources like oil and coal.

“The pandemic has created disruption in the global energy sector, but low gas prices will ultimately stimulate demand growth as the economy recovers, said BNEF’s Ashish Sethia, global head of commodities. “We have already seen unprecedented coal-to-gas switching in Europe, and clean air policies in major growth markets such as India and China that will drive more gas adoption in the next few years.”

While ample natural gas resources exist to support demand growth, more infrastructure development is needed to support growth in the medium term, IGU said. It cited projects in India that would nearly double the length of the gas transmission grid, and China’s goal to grow by 2025 its gas network by 60%.

IGU researchers said medium-term growth would come from increasing cost competitiveness and increased global access. A “particular growth opportunity” exists in liquefied natural gas (LNG). Imports of the super-chilled fuel reached 482 billion cubic meters last year, up 13% from 2018, according to the report. Even though imports are expected to decline by about 4.2% this year, “it could rebound quickly to previous levels as soon as 2021, depending on the persistence and longevity of the pandemic.”

In the longer-term, there are “major opportunities” to scale up the use of low-carbon gas technologies, which researchers said depend on policy action and infrastructure investment in the coming years. For example, hydrogen could abate up to 37% of energy related greenhouse gas emissions, according to BNEF estimates.

The development of an international hydrogen market could also accelerate adoption. Germany, for example, which is pursuing rapid development of hydrogen, could procure cost-competitive hydrogen at about $1/kilogram in 2050 from a variety of sources, including via electrolysis from its domestic renewable power, or via pipeline imports from North Africa or Southern Europe.

“The hydrogen market is on the verge of a revolution,” said Snam CEO Marco Alverà. “The goal is to bring down the cost of green hydrogen until it becomes competitive with fossil fuels in many applications in the next five years.” Blending hydrogen with natural gas in existing pipelines also is a “smart way” to scale up hydrogen production.