The world again saw an increase of natural gas buying at prices tied to dominant hubs and indices last year as the number of purchases linked to competing fuels like crude oil declined in an ongoing shift influenced by a sharp spike in liquefied natural gas (LNG) spot trading, according to the International Gas Union (IGU). 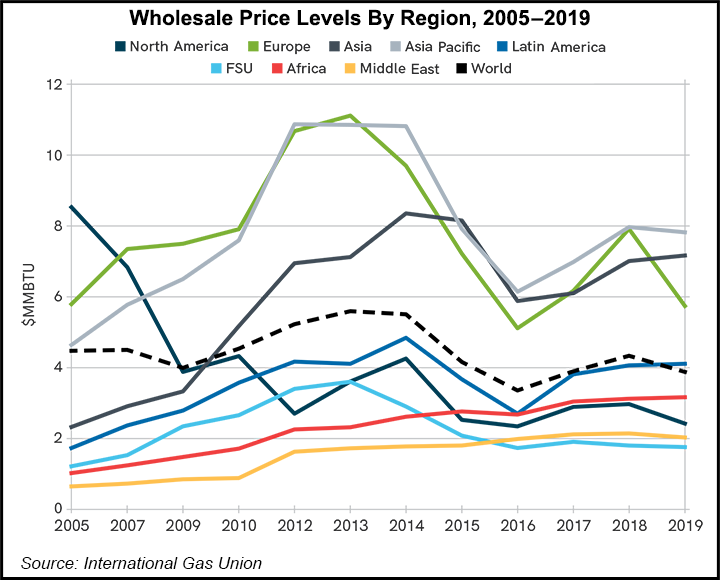 The IGU’s latest Wholesale Gas Price Survey released Thursday found that “gas-on-gas” (GOG) competition’s share of the global market increased by 1 percentage point to 48.4% between 2018 and 2019, while “oil price escalation” (OPE) declined by about 1 percentage point to 18.5% over the same time.

While IGU’s definition of GOG includes a variety of price mechanisms, it generally refers to purchases conducted on a daily, monthly or annual basis at prices linked to global gas hubs or indices. OPE is defined as gas prices that are linked to the cost of competing fuels, typically crude oil, or even coal or electricity.

“The rise between 2016 an 2018 was all due to rising spot LNG imports, while in 2019 the increase was split equally between spot LNG imports and the rush of LNG to Europe’s traded markets,” IGU said.

IGU’s flagship publication, the survey covered responses from 91 countries that represent 98% of the world’s natural gas consumption. It found that about 59% of LNG imports are linked to the cost of oil, while 41% are linked to gas. The bulk of oil-linked LNG is sold in the Asia Pacific, while gas-linked LNG is largely imported in North America and Europe, along with other countries that take in spot cargoes.

The survey also tracks how domestic production and pipeline imports are priced. Overall, it found that wholesale natural gas prices declined in 2019, “largely due to the impact of rising global gas supply leading to sharp falls in spot prices around the world.” Global gas prices averaged $3.88/MMBtu, the second lowest recorded in the survey’s history, which dates back to 2005.

The highest prices were paid by those purchasing gas linked to oil prices at an average of $7.40, or more than double the GOG average which was $3.55 last year.

“While the GOG category is heavily influenced by the relatively low prices in North America and Russia, the collapse in spot prices has also widened the gap,” IGU said. “If these were excluded then the balance of GOG prices would be on average $6.02.”

Buyers in the Asia Pacific region paid the highest prices for natural gas at just under $8.00, while those in Asia paid more than $7.00 given that OPE is the primary pricing mechanism in those regions.