Carbon dioxide emissions in the United States plunged 10% in 2020 as stay-at-home orders and the economic slump driven by the Covid-19 pandemic took a toll on energy demand. 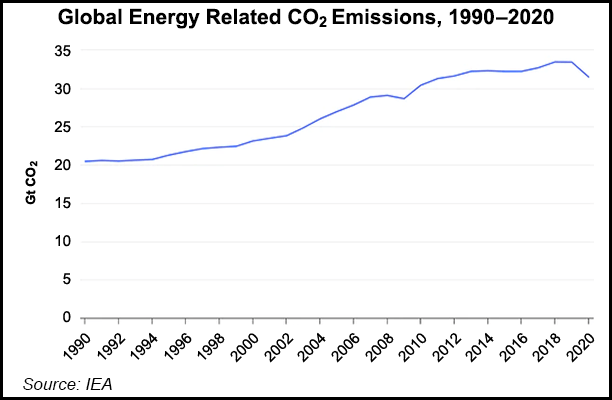 According to a new report by the International Energy Agency, annual carbon dioxide (CO2) emissions fell by almost 500 million metric tons in 2020, accelerating a trend of declines that had already been in motion for years.

“With a strong coal-to-gas shift as natural gas prices have moved toward historic lows, and the rapid growth of renewables, emissions from coal-fired power generation declined 27% from 2015 to 2019,” according to researchers.

CO2 emissions hit their lowest point in the spring as states implemented stay-at-home orders, but started to bounce back as the restrictions were lifted. By December, U.S. emissions were approaching the level seen in the same month in 2019, according to the report, as economic activity increased and the combination of higher natural gas prices and colder weather favored an increase in coal use.

Globally, emissions dropped by almost 2 billion metric tons last year, the largest absolute decline in history, according to the IEA. About half of that was because of lower use of oil for road and air transport. However, the report warned that economic activity and travel are on the rise again, along with oil consumption and emissions.

“The record increase in sales of electric vehicles is insufficient to offset the growth in emissions caused by the uptick in road traffic around the world,” according to IEA.

Global emissions from oil use plummeted by more than 1.1 billion metric tons, down from around 11.4 million tons in 2019. Meanwhile, low-carbon fuels and technologies, in particular, solar photovoltaic and wind, reached their highest-ever annual share of the global energy mix, increasing it by more than one percentage point to more than 20%, according to the report.

In addition to the United States, major emitters contributing to the rebound in CO2 emissions include China, which saw a 7% increase in emissions in December compared with a year earlier. In addition, the most recent annual figures show China’s overall CO2 emissions in 2020 were 0.8%, or 75 million metric tons, above the levels assessed at the end of 2019.

Meanwhile, annual CO2 emissions in India dropped by 7%, or 160 million metric tons in 2020, compared with its average emissions growth of 3.3% from 2015 to 2019. However, emissions in India rose above 2019 levels in September as the economy improved and restrictions were relaxed.

In addition, the return of road transport activity in Brazil in September drove a recovery in oil demand. Increases in gas demand in the later months of 2020 pushed emissions above 2019 levels.

“If current expectations for a global economic rebound this year are confirmed – and in the absence of major policy changes in the world’s largest economies – global emissions are likely to increase in 2021,” IEA executive director Fatih Birol said.

“Nonetheless, there are still reasons for optimism. China has set an ambitious carbon-neutrality target,” he noted. In addition, the Biden administration has rejoined the United Nations climate accord, aka the “Paris Agreement and is putting climate at the heart of its policymaking.”

Meanwhile, “the European Union is pushing ahead with its Green Deal and sustainable recovery plans; India’s stunning success with renewables could transform its energy future; and the United Kingdom is building global momentum toward stronger climate action at COP26 in November.”