Fuel costs for generating natural gas- and coal-fired electricity surged in 2021 but should taper off in the coming years, the International Energy Agency (IEA) predicted in its latest semi-annual Electricity Market Report. 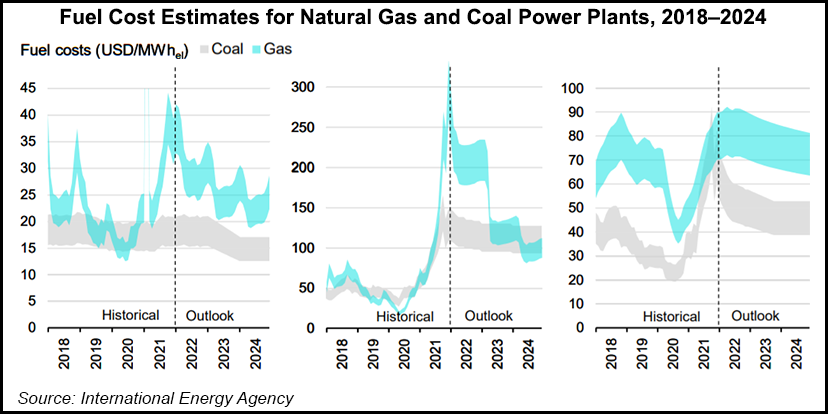 “Sharp spikes in electricity prices in recent times have been causing hardship for many households and businesses around the world and risk becoming a driver of social and political tensions,” said IEA Executive Director Fatih Birol.

The agency pointed out that gas-fired generation increased by a more modest 2% during the period.

“The steep increase in demand outstripped the ability of sources of electricity supply to keep pace in some major markets, with shortages of natural gas and coal leading to volatile prices, demand destruction and negative effects on power generation, retailers and end users, notably in China, Europe and India,” stated IEA.

China’s electricity demand grew by an estimated 10% year/year, representing about one-half of demand growth worldwide for 2021, noted IEA. More than half of China’s provinces have grappled with power rationing amid the spike in demand.

IEA said that its price index for major wholesale electricity markets nearly doubled year/year in 2021 and reflected a 64% increase against the 2016-2020 average. It noted that increases were particularly sharp in Europe, Japan, and India but “were more moderate in the United States where gas supplies were less perturbed.”

Looking ahead, IEA projects that electricity demand growth should subside to an average of 2.7% per year for 2022-2024. The agency cautioned, however, that Covid-19 and high energy prices “bring some uncertainty to this outlook.”

Through 2024, IEA predicts average annual electricity demand growth rates of 8% from renewables and 1% from nuclear.

Thanks to slower electricity demand growth and “significant renewables additions,” IEA also said that “fossil fuel-based generation is expected to stagnate in the coming years.”

IEA anticipates “around 1% a year” growth in gas-fired generation, coupled with a slight decrease in coal-fired generation “as phase-outs and declining competitiveness in the United States and Europe are balanced by growth in markets like China and India.”

IEA lays out a scenario with “Henry Hub averaging 12% below its 2021 levels according to forward curves as of early January 2022. Nonetheless, coal-based generation remains more competitive than gas, compared to the 2018-2020 period.”

Tom McNulty, president of Houston-based energy transition consultancy TJ McNulty & Co., told NGI the significant level of coal-to-gas switching noted in the IEA report “is an awful result of poor government policies that seek to reduce the production of oil and gas. It is also a result of myopic policies that seek to remove hydrocarbons such as natural gas from the energy stack far too fast.”

He called natural gas a “fulcrum molecule” that represents the “single most critical element” for the energy transition, adding that another “answer” would be more nuclear power.

“Electricity produced from renewable energy will grow and should grow but it cannot be relied upon today for secure baseload power, especially in industrialized economies,” McNulty said.

He added that gas-to-coal switching would “not continue if natural gas production increases by 7% right now in the U.S. and continues to grow from there. The U.S. is a natural gas superpower and should be supplying markets all over the globe much more rapidly.”