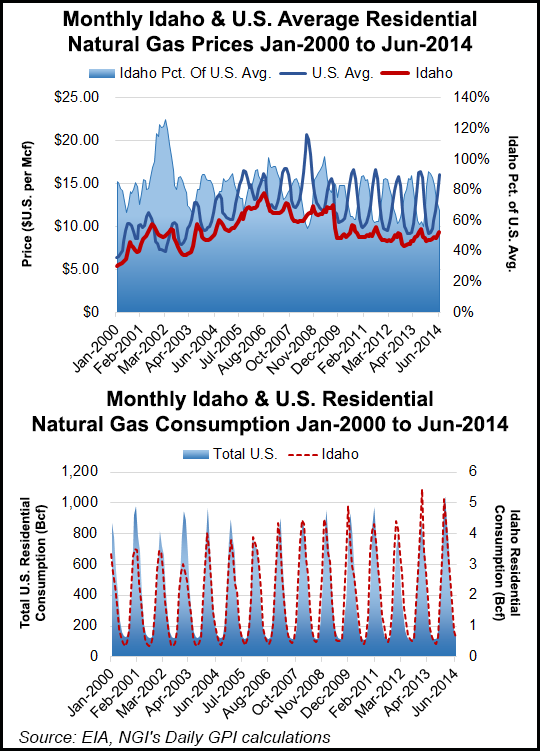 Natural gas price and demand pressures from last winter’s record cold were cited as the primary cause of the hike.

The Idaho Public Utilities Commission (PUC) approved Intermountain’s request for a 2.64% ($6.7 million) increase. It is the utility’s second consecutive rate hike in its annual purchased gas cost adjustment (PGA) after five straight years of decreases prior to 2013.

For residential customers with both space and water heating, the increase means about $2 added to their monthly gas utility bill in southern Idaho. The PGA is revised every Oct. 1 for Intermountain’s more than 331,000 customers spread across 74 communities in the southern part of the state.

“Since the turn of the millennium, average Idaho residential natural gas prices have risen along with the national average through 2008 before beginning a slow decline that has persisted since,” said NGI Markets Analyst Nathan Harrison. “Over that period, Idaho residential prices have been less responsive to increased winter demand than the U.S. as a whole.”

In general, Idaho residential natural gas prices have been much less volatile than the U.S. average, Harrison added. “From January 2000 through June 2014, the U.S. average price has exhibited a standard deviation of $2.84/Mcf while the standard deviation of Idaho prices was only $1.77. It would be easy to conclude that winter demand spikes in the state must be less severe than those of the broader U.S.; this however is not the case. Idaho winter consumption tends to track the broader U.S. quite well and, in fact, Idaho’s winter peak consumption has averaged 964% of its summer lows since 2000, while across the total U.S. this figure was only 793%.”

In August, when they filed the PGA with the PUC, Intermountain officials attributed the increase to macro-economic issues, and “mostly supply/demand” dynamics in the U.S. market.

“Last winter’s cold weather in the eastern U.S. put an upward pressure on prices, and also put a significant dent into natural gas storage levels across the country,” said Scott Madison, Intermountain’s executive vice president/general manager. “There also continues to be an increase in demand from natural gas-fired electric generation.”

Madison added, and the PUC concurred in giving its approval, that nationally “we continue to see increased domestic natural gas production, and we anticipate prices will remain fairly stable in the coming years.”

Intermountain indicated that it kept the size of the rate increase down by passing through some added revenues to customers, such as an extra $3.9 million coming from profits from selling excess pipeline capacity to wholesale gas marketers and natural gas companies. In addition, it made some extra profits on the sale of liquefied natural gas from an above-ground plant operated near Nampa.