Hurricane Sandy appears to have posed a minimal disruption to oil and gas companies operating in the Marcellus Shale. 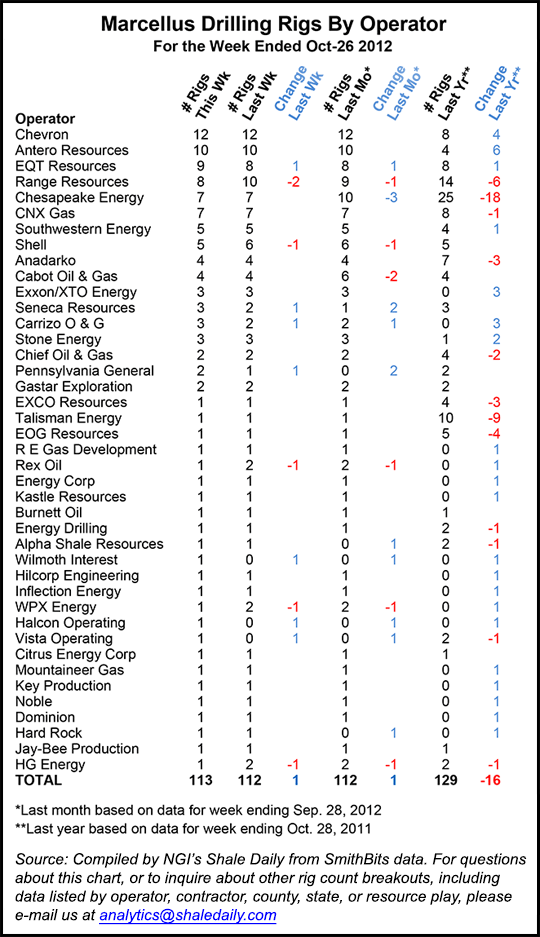 Cabot Oil & Gas Corp. spokesman George Stark told NGI’s Shale Daily the company had idled five drilling rigs on Monday, but they were back in operation on Tuesday afternoon. “We halted operations where we were drilling, [but] the storm did not materialize,” Stark said Tuesday. “The high winds were not there. So we were able to make the all clear assessment this afternoon around 3 p.m. and went back to full operations.”

Stark added that he knew some people were “concerned about flooding and [hydraulic fracturing waste] pits overflowing. But we operate a closed-loop system, so there is no opportunity for pits to flood or reserve pits or impoundments [to overflow] because we don’t operate them. That’s the benefit of a closed-loop system.”

Matt Pitzarella, spokesman for Range Resources Inc., told NGI’s Shale Daily the company did not need to idle any of its approximately six drilling rigs operating in the Marcellus.

“We didn’t have any damages, stoppages or issues associated with [Sandy],” Pitzarella said Tuesday. “That was really a combination of planning and preparation as well as Mother Nature. Certain aspects of what we were doing we postponed during the storm. For example, we had a frack crew running in southwest [Pennsylvania], but we rigged it down and sent the guys home.”

Pitzarella said Range suspended activities at a rig running in the area of Williamsport, PA, but it was running cementing activities at the time the storm hit.

“Right now our primary focus is being attentive to our customers: the end-users, the utilities and those companies that may have had service disrupted downstream,” Pitzarella said. “We’re looking to do whatever we can do to work with them.”

Although officials with Chesapeake Energy Corp., whose subsidiary, Chesapeake Appalachia LLC, has the most permitted wells and leads natural gas production in Pennsylvania, did not return calls seeking comment, the company also has not posted any announcements online indicating that Sandy had disrupted its operations.

The hurricane prompted the Marcellus Shale Coalition (MSC) to postpone its Transportation Safety Day and Flagger Training program scheduled for Tuesday in Mansfield, which is in Tioga County, PA. A makeup date for the program has not been announced.

“The safety of our workers and communities is the paramount value for our industry and a cornerstone of the Transportation Safety Day program,” MSC President Kathryn Klaber said.

Pennsylvania Gov. Tom Corbett declared a statewide disaster emergency on Friday in advance of Sandy’s arrival. In an interview Tuesday morning he said 38 counties were under emergency declarations, and 43 counties had set up emergency operation centers.

Although Corbett didn’t mention oil and gas operations, he did say that 1.3 million customers in the state were without electricity. Most of the power outages were in the southeast part of the state “but it is now starting to track west,” Corbett said. He added that nuclear facilities along the East Coast “are under enhanced oversight by the Nuclear Regulatory Commission.”

The Interstate Natural Gas Association of America (INGAA) said it appeared that the nation’s pipeline system had weathered the storm well.

“[Our] member companies are monitoring developments and their systems actively, with a focus on potential flooding or wind damage to above-ground facilities in low-lying or particularly hard-hit areas,” said INGAA President Don Santa. “Any potential outages are likely to be mitigated by relatively modest seasonal natural gas demand and lower electric generation demand due to power outages.”

“Sandy has been a tragic natural disaster, and the natural gas transmission industry stands ready to serve our customers throughout this event,” Santa said. “We are appreciative of the efforts of the pipeline crews during this event.”