The outcome of a ballot initiative in Colorado that pits environmentalists against energy operators appears to be a razor-thin margin ahead of midterm elections Tuesday, and producers are literally hedging their bets, according to Rystad Energy. 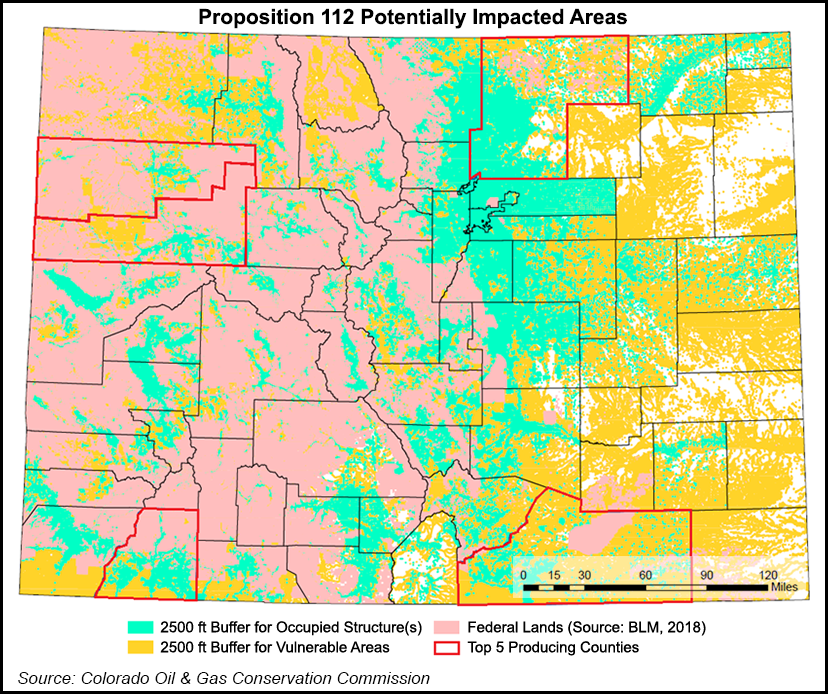 Proposition 112, if approved, would require exploration and production (E&P) companies to increase drilling site setbacks to 2,500 feet from 500 feet for residences and workplaces, as well as “vulnerable areas.” Some energy industry opponents think the requirements would prove disastrous for operators in the Denver-Julesburg (DJ) Basin.

“Rystad Energy observes strong evidence that operators are hedging against a potentially adverse voting outcome,” said shale research chief Artem Abramov. “Given that permits approved before the vote will be exempt from the new restrictions, we have seen a strong uptick in permitting activity in the DJ Basin during the third quarter of 2018.”

Weld County, the DJ’s core producing county, reported a sequential jump of more than 200 drilling permits granted in the third quarter, “creating an anomaly in the number of approved permits relative to the permitting activity range seen in the previous six quarters,” according to Rystad research.

Anadarko Petroleum Corp. and Noble Energy Inc., two big DJ E&Ps, indicated during third quarter conference calls that they were still obtaining permits and expanding operations, but they also said they could pivot to other areas if need be.

The DJ “has turned into a huge success story for the oil industry in recent years, but the upstream sector in the state could be dealt a critical setback when voters go to the polls,” analysts said. E&Ps working in the DJ “have realized dramatic improvements to well economics, with average wellhead breakeven oil prices falling from $80/bbl in 2010-2011 to just $30-32/bbl in 2017-2018.”

Ahead of the upcoming vote, Colorado’s oil output also gained “significant momentum” last summer, putting it on trend to end the year producing at a rate of around 550,000 b/d, according to Rystad.

“We see strong evidence of operators fast-tracking permitting activity to mitigate potential effects of an unfavorable outcome of the Proposition 112 vote.”

If 112 were to pass, it could eliminate “to varying degrees and depending on proximity to residential areas,” drilling locations for DJ operators, estimated at 67-71% for HighPoint Resources and Noble, and as much as 94-97% for Anadarko and PDC Energy Inc.

The retreat from producing oil might not be visible before 2021, but output likely would enter a “multi-year phase of decline after 2020 if Proposition 112 is passed,” as opposed to continuous growth expectations through the mid-2020s if the measure is rejected.

Rystad’s team also has seen clear evidence that the recent increase in permitting activity has been driven by locations within the buffer zone, emphasizing attempts by E&Ps to secure locations in the event the proposition is approved.

Broomfield County offers an example of how the permitting uptick has played out, the analysis showed.

“No new wells have been turned-in-line since 2012, but this year alone Extraction Oil & Gas suddenly received permits for 71 Niobrara locations, all with proposed two-mile lateral spacing,” Abramov said. “Needless to say, there is literally no land in Broomfield that is outside the 2,500 foot buffer zone proposed in Proposition 112.”

Three of the six largest operators in the DJ — Anadarko, Extraction Oil & Gas Inc. and PDC, “have more than 90% of their net acreage within the buffer zone.” The impact on PDC “would be particularly dramatic, invalidating 97% of the company’s acreage.” Noble has about 71% of its acreage in the buffer zone, while SRC Energy Inc. has 79% and HighPoint has 67%.

During a conference call Thursday to discuss third quarter performance, SRC CEO Lynn Peterson said staff was continuing to educate the public about the benefits of the energy industry.

“We have a lot of faith that Colorado voters understand that jobs, national security and energy costs are important to everyone and will vote accordingly,” Peterson said. “Once the election results are known, we need to immediately move forward and continue to develop a cohesive relationship with the executive and legislative branches as well as the communities where we operate.”

For all of the active operators working in Colorado, DJ acreage “ranks high in portfolios,” said Rystad shale analyst Alexandre Ramos-Peon. “Hence, even a reduced size of the remaining Tier 1 well inventory should not eliminate its development as long as operators’ decisions are guided by economic rationale. In the medium-term, we expect activity to migrate gradually toward federal lands.”

Approval of the proposition would have only a “marginal impact” on volumes expected to come from already producing wells, drilled but uncompleted (DUC) wells and already permitted drilling locations.

That could be interpreted as positive news, at least in the short term for E&Ps, regardless of Tuesday’s outcome.

Existing DUCs and approved permit inventory should be enough to maintain oil production growth through 2Q2020 and push estimated DJ production to more than 630,000 b/d in 2Q2019 from 470,000 b/d in 3Q2018 “without contributions from future permits.”

Production support from the existing permit inventory likely would extend into 2021, because the current size of inventory indicates that not all of the permits in hand would be used to drill within the initial two-year period and would have to be renewed to be drilled later.

“If Proposition 112 fails to find sufficient voter support, we see DJ Basin oil production approaching 800,000 b/d by the end of 2021,” Ramos-Peon said. “However, if Proposition 112 passes, we conclude that some operators, whose inventory size is impacted dramatically, would not be able to deliver on expectations.”

If activity were to migrate toward federal lands where permit processing times are much longer, analysts expect to see a gradual decline in activity as the current permit inventory depletes.

“In such a scenario, we see DJ oil production peaking in early 2021 and falling below current production levels by 2023-2024.”

The long-term impact of Proposition 112 passing would be dramatic, Abramov said.

“While the state economy is believed to be well diversified, the impact would be felt by the entire state with up to 200,000 anticipated job losses, up to $10 billion in lost tax revenue by 2030 and a reduction of more than $200 billion in gross domestic product over the same period.”