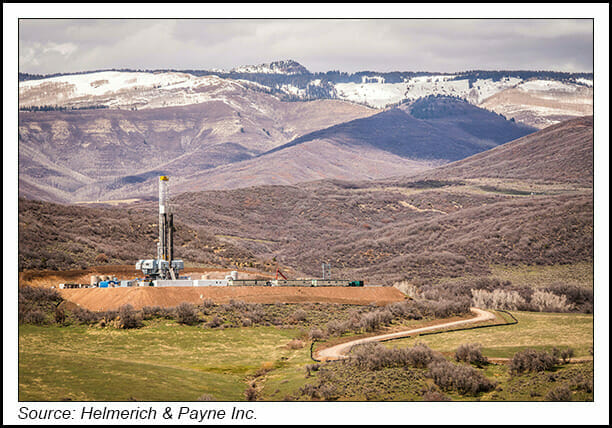 Lindsay and CFO Mark W. Smith shared a microphone to discuss the fiscal 2Q2021 results and the outlook for this year.

“The increase in activity we experienced during the first half of our fiscal 2021 year has been encouraging, particularly in light of the record industry downturn last year,” Lindsay said.

H&P’s U.S. rig count at the end of April was at 118 rigs, up 25% since the end of December. It holds about 35% of the U.S. public exploration and production (E&P) rig market share and about 14% of the private E&Ps. Through its global subsidiaries, H&P designs, fabricates and operates a fleet of 242 land rigs in the United States, 32 international land rigs and seven offshore platform rigs.

What has evolved is an apparently sustained change in spending behavior by the E&Ps.

“Clearly, the energy industry’s capital discipline, which started prior to the global pandemic, remains resolute, and this is something we are actually pleased to see,” Lindsay said. “The attention to controlled spending and generating returns in a variety of commodity price environments is what the industry needs to attract and retain investment.”

The “natural step in capital discipline is deriving the most value per capital dollar spent, not just in a one-year budget cycle, but over the life of an investment,” he said.

“Going forward, we anticipate a degree of permanence in the change of historic industry behaviors and norms. Energy markets are coming back into balance, global oil demand is reviving and oil inventories are falling back to their five-year average…Focused, disciplined spending that generates returns under a variety of commodity price scenarios is what the industry needs to attract and retain investors.”

The Tulsa-based operator is keeping its focus on leveraging software, data and demand for the super-spec, digitally equipped FlexRigs. E&Ps also are keen to hear about new commercial models, “which incorporate performance metrics into the contract,” Lindsay said.

“New commercial models are designed to generate win-win outcomes. The customer has a well with improved economics and H&P is compensated for helping to create a portion of that value. Currently, approximately 30% of our active fleet in the U.S. is under some type of performance contract,” versus a year ago “where we only had about 10% of our fleet on performance contracts.”

Because of the high demand for super-specs over less advanced equipment, H&P in March began “older, less capable rigs, the majority of which were previously decommissioned, written down and expected to be sold for scrap,” CFO Mark Smith told analysts. The plan is to sell 68 U.S. rigs not classified as super-specs, most of which were previously written down and decommissioned.

International Solutions business activity averaged four active rigs, with a fifth rig added in Argentina midway through the quarter. In the Gulf of Mexico segment, “we continue to have four of our seven platform rigs platform rigs contracted,” Smith said. There also are management contracts on three customer-owned rigs, one of which is on active rate.

The high demand for top-of-the-line rigs means something has to give on prices, Lindsay noted.

“As the demand for FlexRig Solutions has increased, we find ourselves at a point where rig reactivations are becoming an increasing financial burden,” he said. “We believe the market is fast approaching an inflection point where this financial burden will have to be carried by our customers as well, either through lump-sum payments or pricing over the life of the contract.

Across the industry, H&P management estimates there is “only a handful of idle super-spec rigs that have been active during the past nine to 12 months, particularly as longer idled rigs are put back to work higher reactivation costs will play a larger role in contract economics going forward,” Lindsay said.

“We already see a shortage of ready to work super-spec rigs in the market. So there is a trend emerging in the near term to improve FlexRig solutions pricing and contract economics during the rest of 2021.”

If oil and natural gas prices “remain strong, many believe E&P budgets will likely respond positively in 2022. And that will increase the demand for incremental super-spec rigs.”

However, there’s a catch. “Those incremental rigs will be those that have not worked in well over a year, and it will be costly to bring those rigs back into service,” Lindsay said.

The CEO also underscored that the “industry is structurally smaller today, and the prospects for reversing seem very slim, especially near term. We must respond to the changing priorities. But it doesn’t mean there are no longer opportunities for H&P to innovate to grow and to thrive in this evolving environment. Oil and gas is still critical to the global economy, and it will remain so for many years to come.”

Net loss for fiscal 2Q2021 was $121 million (minus $1.13/share), compared with a year-ago loss of $421 million (minus $3.38). H&P incurred one-time impairments in fiscal 2Q2021 of $54 million related to decommissioning rigs held for sale and a $23 million loss on sales related to excess drilling equipment and spares. Operating revenue fell year/year to $296 million from $634 million.