Global natural gas prices were mixed on Monday, picking up where they left off last week, but the outlook remains strong as bullish market fundamentals in Europe, Asia and South America remain largely unchanged. 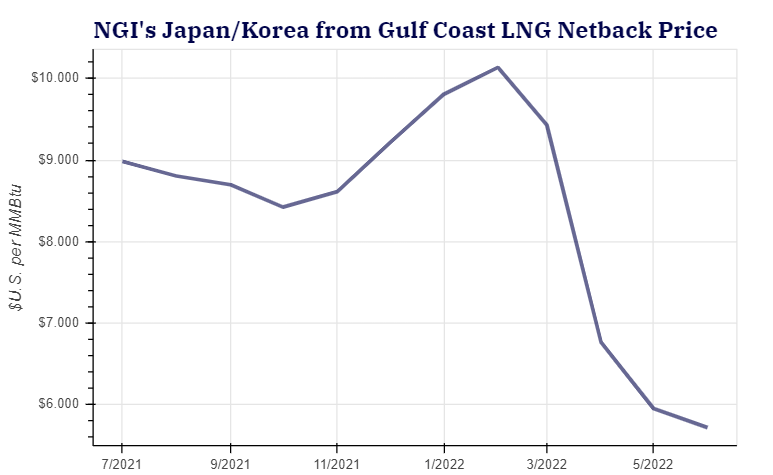 The front-month National Balancing Point and Title Transfer Facility contracts in Europe traded sideways last week, but they remained stable around $9/MMBtu. Rising temperatures on the continent cut demand and a jump in pipeline imports weighed on spot prices, according to Engie EnergyScan.

Meanwhile, a drop in European carbon prices Friday didn’t drag down the near-term curve and futures prices climbed higher Monday amid maintenance outages at supply fields and regasification terminals in Norway, the UK and France. Just three liquefied natural gas (LNG) cargoes are scheduled to unload in UK, Dutch and Belgian ports in the coming days, Schneider Electric said in a note on Monday.

“Slightly more comfortable fundamentals pulled European net storage injections above last year’s levels at the end of last week,” analysts at Engie EnergyScan said Monday. “However, in absolute terms, stock levels remain relatively weak and remain a source of concern. And they could continue to lend support to prices this week.”

European inventories were at 39.5% of capacity on Saturday, the latest day for which data is available. That compares to the five-year average of 54%.

Buyers in the region continue to fill inventories ahead of hot weather. Temperatures over the next two weeks in both Japan and South Korea — two of the world’s leading LNG importers — are forecasted above normal, according to Maxar’s Weather Desk.

South Korea said late last week that it would stockpile additional gas to better maintain supplies as a hedge against price increases or supply disruptions like those seen last winter. The country’s Ministry of Trade, Industry and Energy said the country would stockpile nine days worth of gas versus a previous target of seven in a measure expected to be finalized next month.

On the other side of the world, one of the worst droughts in decades has created a water crisis in Brazil that has left hydropower reservoirs nearly depleted. The dry weather has created additional demand for LNG in the country, according to Bloomberg, which reported last week that the country has taken in a record number of cargoes from the United States this year.

NGI calculations show that delivered ex-ship prices at the Pecem terminal in northeastern Brazil were at $9.49/MMBtu at the end of last week.

In the United States, feed gas deliveries have hovered between roughly 10-11 Bcf/d in recent weeks as maintenance cuts into uptime at terminals. U.S. natural gas prices moved higher last week even as moderate weather across much of the country kept a lid on demand. Heat out West led the gains, sending NGI’s Weekly Spot Gas National Avg. up 11.5 cents to $2.800/MMBtu. Natural gas futures also ended the week comfortably above $3.00, but shed two cents Monday to finish at $3.07 amid cooler forecasts.

Oil charged higher last week to hit fresh highs. The demand outlook continues to firm as parts of the world recover from the pandemic. The Organization of the Petroleum Exporting Countries and its allies is also maintaining plans to gradually raise output through next month. While Brent futures for August delivery fell 40 cents from Friday’s close, they were still finished at $71.49/bbl. NGI calculations showed maximum Brent-linked LNG prices at over $12/MMBtu Monday.

In other developments last week, Russian President Vladimir Putin said pipe laying for the first leg of the Nord Stream 2 pipeline has been completed. The underwater section of the twin 5.3 Bcf/d system, which would move natural gas from Russia to Germany, still needs to be connected to the section in German territory. But Putin reportedly said during remarks at the St. Petersburg International Economic Forum that Gazprom PJSC would soon be ready to start filling the pipeline.

In other supply news, Tanzania Energy Minister Medard Kalemani reportedly told lawmakers last week that the country could begin construction on a delayed 7.5 million ton LNG export terminal in 2023. Equinor ASA is developing the project along with Tanzania’s government.

The company took a writedown on the project earlier this year, saying it doesn’t compete with others in its portfolio. Medard said talks have resumed with Equinor and other companies involved in the project about moving ahead. There is currently 103.9 million tons of proposed liquefaction capacity in Africa, which could emerge as a key LNG export region if the projects materialize, the International Gas Union said in a report released last week.