A Canadian-based exploration/production (E&P) company founded five years ago put a chill on its bullish joint venture aimed at drilling on some of its extensive Monterey Shale acreage in California just as federal leasing policy in the state has been called into question for slowing development. 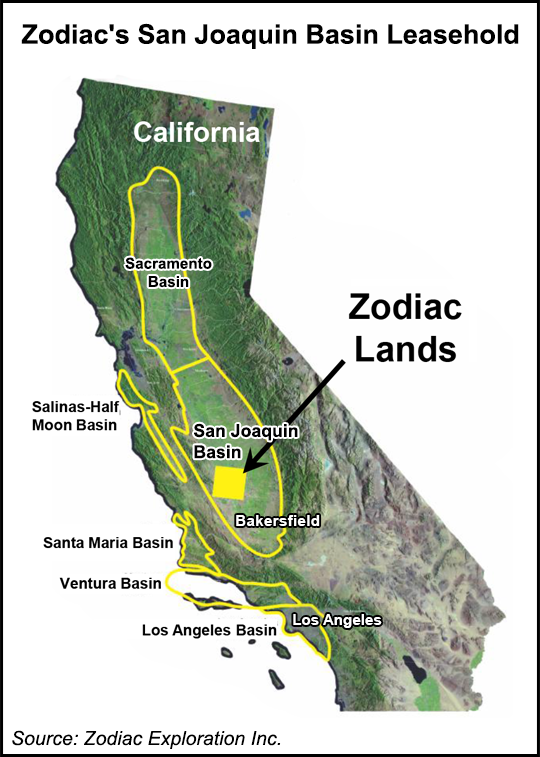 Zodiac Exploration Inc. said on May 1 that ExxonMobil Corp. and Shell’s joint venture, Aera Energy LLC, was temporarily suspending operations at its well site and keeping it on “tight-hole” status after announcing it had reached vertical depth of 15,362 feet on the first of a two-phase vertical and horizontal drilling project on some of Zodiac’s 78,000 net acres in the San Joaquin Basin.

“Aera has further advised [Zodiac] that it will make a decision in due course on drilling the horizontal well section as required by a farm-out agreement [signed in October with Zodiac],” said Peter Haverson, CEO. NGI contacted Haverson and Zodiac seeking clarification on the drilling suspension but was unable to obtain a response from the company.

In a corporate presentation in April by Haverson and other senior executives with the Calgary, Alberta-based company, Zodiac was touting its Aera agreement as calling for the ExxonMobil-Shell JV to pay 100% of the costs of the first and second phase vertical and horizontal wells (one each in each phase) for the rights to nearly 20,000 of Zodiac’s contiguous net acres in the San Joaquin Basin.

In the first phase for which the work is now suspended, the primary target was the Kreyenhagen Formation, with a secondary target of the Monterey; in the second phase, those targets were to be reversed, but it is now unclear if the project as outlined in April will be completed this year. The estimated spudding of the second vertical well was targeted for December this year, according to the corporate presentation.

This new uncertainty comes after the federal Bureau of Land Management (BLM) announced this month that its lease sale scheduled in California for May 22 has been postponed due to federal budget constraints tied to sequestration and other issues (see Shale Daily, May 10). This prompted an outcry from the industry, including the American Petroleum Institute (API).

API called the BLM move “an example of counterproductive government policy” that will weaken the national economy and national energy security. “America has a game-changing opportunity to build a stronger economy and to secure a brighter future thanks to our vast supplies of newly accessible oil and natural gas,” said API’s John Felmy, chief economist.

API cited federal Department of Interior statistics showing that from 2008 to 2012, drilling permits issued on federal onshore lands dropped 36%, while the actual number of wells drilled dropped by 40% during that period.

BLM had planned to offer 1,300 acres of public lands near the Monterey Shale play this month, but the state BLM office said it will take another look at its schedule for lease sales after Oct. 1. The May sale was BLM’s only remaining sale scheduled in California this fiscal year ending Sept. 30.

The formation, which extends from northern California down to the Los Angeles area, is believed to contain about two-thirds of the U.S. estimated shale oil reserves, about 15.4 billion bbl.