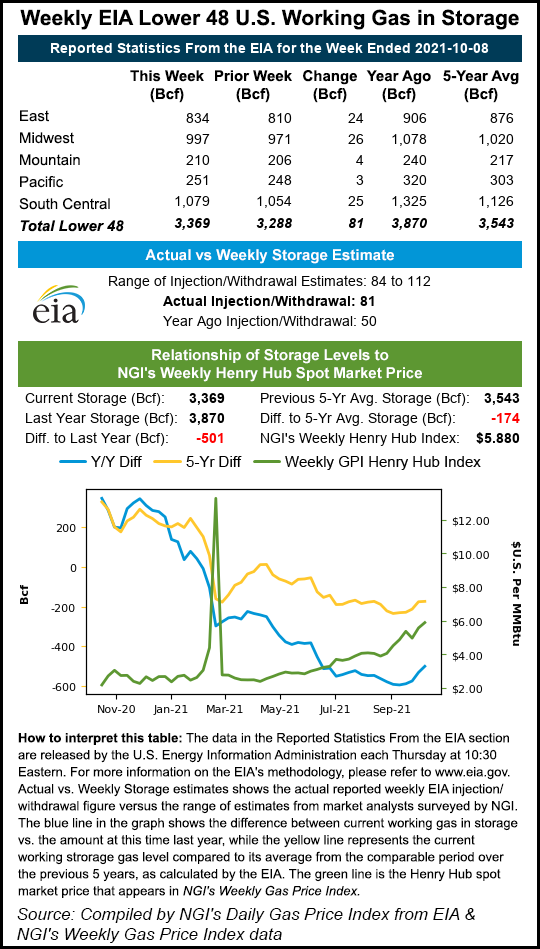 With global supplies tight and domestic demand remaining strong despite the higher price environment, the first cold snap that shows up in the forecast could spook the market and fuel prices. Although the latest weather models remain “far from being cold,” the American and European data sets are in agreement that cooler weather is expected soon.

“In fact, the models, verbatim, indicate that we could still shift cooler yet,” said Bespoke Weather Services.

The forecaster still expects warmth to win out near the end of the month and into early November, but the change in the models “is a notable step change from the high-end warmth at least for a time.

“If the blocking persists longer than anticipated, the variability can linger for longer,” Bespoke said. “But the Pacific side of the pattern remains quite unfavorable for a shift to a truly colder pattern, with a large trough from Alaska down the West Coast.”

Nevertheless, the drop in temperatures could stall efforts to mount hefty storage increases in the final weeks of the injection season. On Thursday, the latest government data indicated that the gas market has more work to do to replenish stocks ahead of winter.

The Energy Information Administration (EIA) stunned the market, reporting a much lower-than-expected 81 Bcf injection into storage inventories for the week ending Oct. 8. Although there were concerns of a low-side storage build, the figure came in 3 Bcf below the lowest estimate ahead of the inventory report. It also followed a plump 118 Bcf injection the prior week.

Participants on The Desk’s online chat Enelyst noted that seasonal outages and strong power burns likely contributed to the lighter storage build. Wind generation also played a major role. Enelyst managing director Het Shah said wind generation for the week ending Oct. 8 was at around 20,500 MWh, less than half of what is projected for the current week.

Thursday’s report “was one of the most tight reports we’ve had this summer” when adjusted for weather, according to Shah. The 81 Bcf build is about 6 Bcf/d tight versus the three-year average.

“Next week’s report should be weak again based on wind picking up,” he said.

Enelyst participants were unclear whether the tightness seen in the latest EIA data is something that could carry forward. Although the latest weather models have added some demand for October, weather forecaster DTN’s week 4 outlook shows a continuation of the cool West/warm East pattern.

Relative to extremely warm near-term anomalies, late October and early November may be less bearish than this month to date, according to EBW Analytics Group. Heating demand is forecast to climb 19 gas-heating degree days beginning in week 3, and weather-driven gas demand could rise 11-12 Bcf/d from the current storage week.

More important, however, is the potential start of a weather pattern shift in a cooler direction in week 4, EBW said. DTN’s forecast highlights cold risks if the transition is faster than anticipated.

“With the one- to 15-day outlook capturing early November by the start of next week, sharply higher natural gas prices are possible if colder temperatures appear increasingly likely,” EBW said.

Spot gas prices continued to strengthen Thursday as power burns remained robust despite the higher prices and mild weather. Pricing locations in the West put up some of the largest increases as several weather systems continue in the region, lowering temperatures.

Kingsgate put up the highest gain in the Rockies, jumping 79.5 cents to $4.715 for Friday’s gas day. Even at this level, however, Kingsgate prices remained the cheapest in the region.

NatGasWeather said most other U.S. regions were mild, with widespread daytime temperatures in the 60s to 80s. Heavy rains were expected the next few days in Texas and stretching toward the Midwest ahead of a cool front. A stronger bump in national demand is expected Oct. 22-25 as a weather system tracks across the Midwest and Northeast.

Despite the cooler weather in Texas, which would portend lower air conditioner use, cash prices were sharply higher on Thursday. Houston Ship Channel tacked on 41.0 cents to $5.575, and Texas Eastern S. Texas moved up 35.5 cents to $5.795.

Appalachia pricing locations climbed between 20.0 and 30.0 cents, with steeper increases seen in the Northeast.

“With this in-service request, only 75 MMcf/d associated with the Hilltop Loop facilities remain incomplete,” Wood Mackenzie analyst Devin Cao said. “As of Oct. 2, the construction progress of the Hilltop Loop sits at 79% complete.”

National Fuel Gas Co.’s FM100 modernization and expansion project also is expected to come online on Dec. 1, according to Wood Mackenzie. The risk of delay remains low, Cao said, as pipeline facilities are complete. Work at two compressor stations was in the final stages.

Both of these projects would boost natural gas capacity from Northwest Pennsylvania to markets in the New York City area. Appalachia producer Seneca Resources Co. LLC indicated in August that it would begin ramping up output in order to help fill the new takeaway capacity. The operator is the upstream subsidiary of National Fuel Gas.