Natural gas had a “bumper” year in 2017, as consumption and production increased worldwide at their fastest clip in nearly a decade, BP plc reported Wednesday. 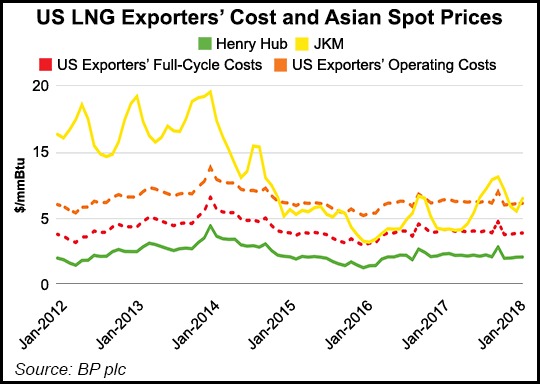 The review covers all things energy-related, as well as carbon emissions trends. BP also for the first time offered an analysis of the global power markets.

Natural gas again accounted for the largest increment in global energy consumption, followed by renewables and then oil. The growth in consumption was led by Asia, with particularly strong growth in China (15.1%, 31 bcm), supported by increases in the Middle East (Iran 6.8%, 13 bcm) and Europe.

The gas trade expanded by 63 bcm, or 6.2%, with growth in liquefied natural gas (LNG) outpacing the pipeline trade, as it did last year. The increase in gas exports was driven largely by Australia (17 bcm) and U.S. LNG (13 bcm), as well as Russian pipeline exports (15 bcm).

LNG supply expansions “helped to improve the accessibility of gas around the globe, with clear signs that the major regional gas markets are becoming increasingly integrated,” said the CEO. “This greater accessibility and integration should help to underpin the long-term use of natural gas.”

Dale, who led the audience through the overview, called 2017 “a bumper year for natural gas, with consumption and production both increasing at their fastest rates since the immediate aftermath of the financial crisis” in 2008-2009.

A central factor supporting the strengthening gas markets is LNG, which increased by more than 10% in 2017, its strongest growth since 2010, aided by Australia and U.S. export trains.

On the demand side, it was all about China, as its thirst for LNG “accounted for almost half of the expansion in global demand,” and overtook South Korea to become the world’s second largest gas importer after Japan.

“The tidal wave of LNG projects that was sanctioned between 2009 and 2014 led many commentators to predict the emergence by now of surplus levels of LNG, as it takes time for demand to absorb the rapid growth in supplies,” Dale said.

The implied LNG supply picture at the end of 2014, given the number of projects that had been sanctioned at that point, suggested a persistent surplus of LNG, or a glut.

“But many observers so far have been surprised by the apparent absence of such a glut,” Dale said. “There is certainly little evidence of LNG facilities standing idle due to lack of demand.”

The absence of a glut in part reflects a “variety of technical issues, as actual LNG supplies have come onstream less quickly than originally planned,” and supply is more in line with original demand profiles.

“However, the apparent absence of a glut also reflects the fact that the surplus LNG supplies, which did emerge, resulted in bouts of unsustainably low prices rather than the build up of idle capacity,” said Dale.

“So there has in fact been an LNG glut of sorts in recent years, but this has manifested itself in periods of unsustainably low prices rather than idle LNG capacity.”

The ability of LNG cargoes to alter their destination in response to price signals in a way that pipeline exports cannot “is likely to lead gas markets around the world to become increasingly integrated, with regional gas prices increasingly moving in unison,” Dale told the audience, which on the webcast was numbered at more than 7,000.

The correlation “is likely to increase further, as Henry Hub increasingly plays a role as the anchor price for global gas markets.”

The growing integration also is apparent in the convergence in some of the volatility of different gas prices.

“As markets open up, disturbances in one region are shared across the world, leading to more similar patterns of variability across the markets,” Dale said. “So there are clear signs in recent data that global gas markets are indeed becoming increasingly integrated.”

While gas demand outpaced all other fuels, fossil and renewables, last year, there are ominous signs that China’s thirst for gas could wane in a couple of years, Dale said.

The surge in gas demand led to “severe strains” on China’s gas infrastructure, “as retail and wholesale prices increased sharply and LNG imports ramped up beyond notional capacity limits.” The strain also led to widespread gas rationing, with households given priority over industrial use.

“Some of these tensions and strains simply reflect the speed with which gas demand expanded. There’s a limit to how quickly LNG imports can be increased,” Dale said. “Imported pipeline gas didn’t grow by as much as perhaps expected.

“But the strains also highlighted the underlying weakness of gas infrastructure in China. The network of pipelines across China is incomplete leading to significant distributional issues. Even more important, gas storage capacity in China is inadequate to match the fluctuations in demand.”

Effective gas storage in China is about 3% of consumption, compared to 20% in the United States and Europe, he said.

“These types of structural issues can’t be fixed overnight and are likely to constrain the extent at which Chinese gas demand outside of the power sector can grow in the near-term.”

Chinese gas demand still looks to increase “strongly” this year, “not least because the surge in consumption continued into the first part of this year, and some of that rationing that held back demand in the final part of last year is likely to ease.”

However, “it seems unlikely that the extent of the surge in gas demand will be repeated in 2019 and beyond.”

Dudley cautioned too about global oil prices, which could fall as U.S. onshore output rises.

The strengthening oil markets, on the backs of higher prices, has a caveat. The “rapid growth in U.S. tight oil should caution us that the recent firming in oil prices is unlikely to persist,” Dudley said.