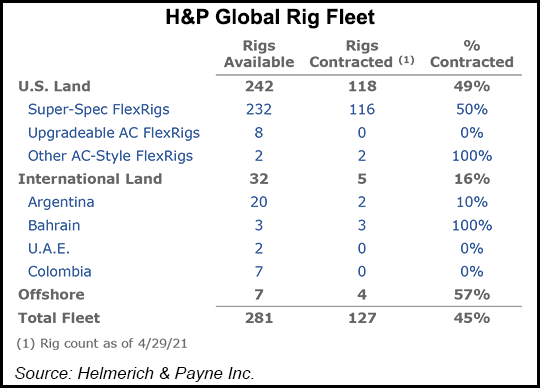 In line with guidance, H&P exited June running 121 rigs in the Lower 48, or 10% more than in the year-ago period, CEO John Lindsay told investors during the fiscal 3Q2021 conference call. By late July, 123 FlexRigs were working in the U.S. onshore, he said.

Business is good, but costly, as H&P is pulling out rigs that for months have been stacked.

“We expect to continue to have a moderate and somewhat choppy upward trajectory in our rig count, as well as improved pricing over the next quarter,” the CEO said. “Although there are approximately 260 idle super-spec rigs available in the U.S. market, we believe fewer than 10 of those rigs have actually worked within the past 12 months. And many of those rigs have been idle for well over 18 months.”

There is a “high cost involved in reactivating long-idle rigs, which typically presents one of those classic pay-me-now or pay-me-later” scenarios,” Lindsay said. “As the rig count increases as demand grows, these reactivation expenses will continue to drive rig pricing higher as the supply of work-ready super-spec rigs become scarce.”

The drivers that lead to enhanced pricing and contract economics are in place, Lindsay noted. Higher commodity prices and stronger activity levels by the exploration and production (E&P) customers are in the equation that adds up to better prices for services, he told investors.

“Perhaps most important of all is our ability to deliver value and better outcomes to our customers,” Lindsay said. “In light of these factors, we have been in discussions with customers to increase pricing. Further, we remain optimistic that current oil prices will translate into higher 2022 E&P drilling budgets and activity in the U.S. land market.”

Based on discussions with E&P customers about the remainder of 2021, H&P estimates that 50 to 75 incremental industry rigs should return to work by year’s end.

If oil prices remain stable or near current levels, “we would not be surprised to see 2022 budgets for public companies drive further incremental increases in rig activity next year.”
Of all the onshore areas in the Lower 48, the Permian Basin should “continue to lead the way,” Lindsay said.

In the Permian, H&P has 67 active super-specs running today. It also has more idle rigs there awaiting contracts.

H&P now is negotiating for better rig contracts with E&P customers. Several of its E&P customers are “pioneering new commercial models to better align our performance with our customers’ goals and allow us to share in the value-added outcomes we help create,” Lindsay said.

“Unless a pricing model can equitably share the benefits derived through better technologies and efficiencies, the ability of the industry to continue to innovate and improve will diminish.”

CFO Mark Smith, who joined Lindsay on the conference call, said the North America Solutions segment averaged 119 contracted rigs during the latest period, up from a sequential average of 105.

The North America Solutions segment’s gross margins are likely to be $72-82 million in fiscal 4Q2021, “with no early termination revenue expected,” Smith said.

“As we continue to add rigs, one-time reactivation expenses continue to pressure margins. We expect those expenses to be approximately $8 million in the fourth quarter.”

Smith said the length of time a rig is idle and the costs required to reactivate it “have a direct correlation. Most of the rigs we are reactivating…have been idle for 12-plus months. Reactivation costs are mostly incurred in the quarter of start-up, so the absence of such costs in future quarters is margin-accretive. That said, some expected reactivation costs in the quarter ending Sept. 30 will be for rigs readied for October commitments.”

H&P’s current revenue backlog from the North America Solutions fleet is around $493 million for rigs under term contract.

In the Gulf of Mexico segment, H&P also has four of its seven platform rigs contracted.

Net losses in fiscal 3Q2021 were nearly $56 million (minus 52 cents/share), versus a year-ago loss of $46 million (minus 43 cents). Revenue climbed to $332 million from $317 million. Operating losses from continuing operations totaled $3 million in the latest period, compared with year-ago losses of $6 million.