During the week ending Aug. 26 there were 14 rigs running in the Haynesville Shale, according to Baker Hughes Inc. (BHI). The number of active Haynesville rigs was the same the previous week, which is 17 fewer than a year ago. But the old, mostly North Louisiana play could be due for a comeback. 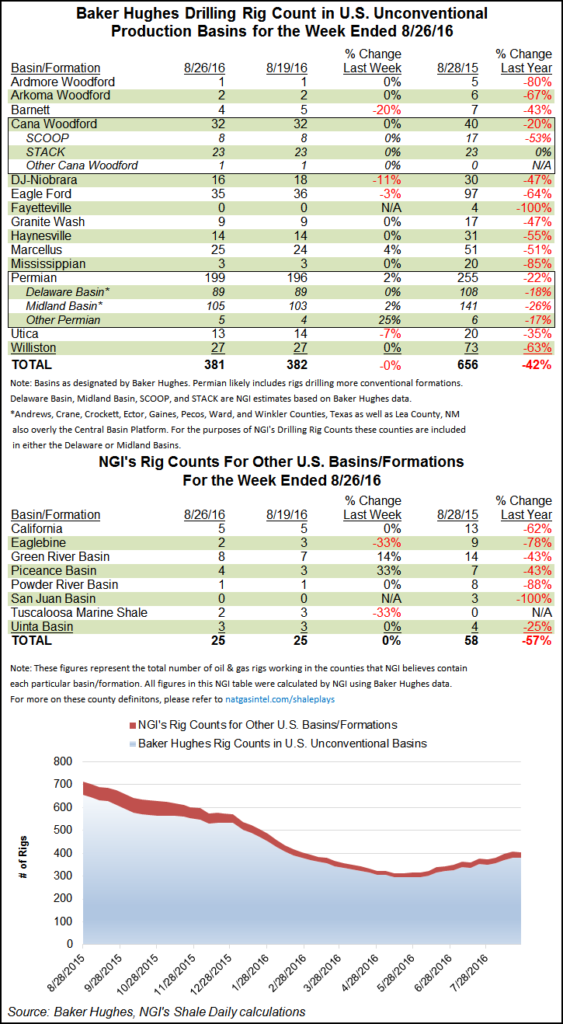 “Haynesville production peaked in late 2011 and has fallen 44% from its high, but recent developments have renewed investor interest in the play…” wrote BMO Capital Markets analyst Phillip Jungwirth in a note published Tuesday.

Indeed, Jungwirth said Haynesville economics are “slightly better” than the Northeast. Analyzing type curve data and publicly disclosed drilling and completion costs, as well as operating costs, Jungwirth found Haynesville “returns to be competitive with the Marcellus and Utica, with breakevens about $3/Mcf Nymex for all three plays.”

Still, it’s unlikely that the Haynesville economics will prompt a stampede back to the play, at least for the time being. “Most operators with core acreage are unlikely to significantly increase activity due to balance sheet constraints, or are unwilling to due to other investment opportunities,” Jungwirth said.

While the Haynesville rig count was static week to week, the Permian Basin gained another three units, according to BHI, to end the week at 199 rigs running. That’s creeping back to its year-ago level of 255.

Overall in the United States, two land rigs departed activity, accompanied by one unit from the offshore; one rig returned to the inland waters. The U.S. count declined by two to end at 489, with 468 of these rigs running on land. Oil rigs were static at 406, but two natural gas rigs left, leaving 81 active, far from the 202 that were running one year ago. Three directional rigs were added, more than offset by the departure of three horizontals and two verticals.

In Canada, 19 oil rigs came back and six gas rigs returned, bringing those counts to 84 and 62, respectively. Alberta ended the week with 88 rigs, up from 79; British Columbia gained four to end at 15; Saskatchewan added 12 rigs to end at 37.