Pilot LNG LLC has reached a milestone in its efforts to build the Gulf Coast’s first dedicated liquefied natural gas (LNG) bunker terminal by signing a heads of agreement (HOA) for a long-term supply deal with an affiliate of the GAC Group. 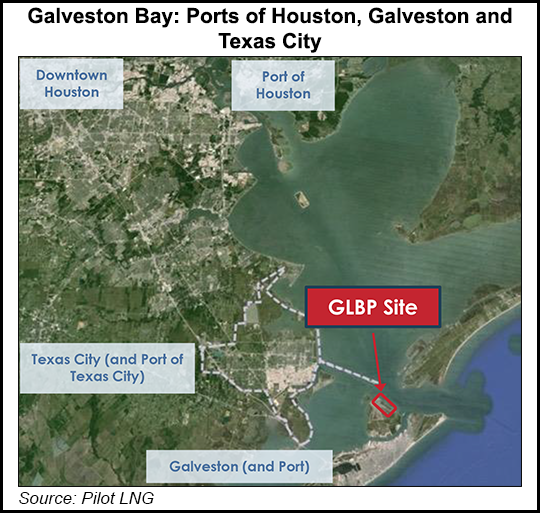 GAC Bunker Fuels procures fuel supplies for customers in the shipping industry. The HOA outlines the terms for Pilot to provide LNG marine fuel to GAC customers on a delivered ex-ship basis. Pilot is developing a facility in Galveston, TX, on Pelican Island, where a floating LNG vessel would be permanently moored with the capacity to produce 500,000 tons per year.

LNG bunker barges would load from the terminal and then distribute the LNG to ships requiring fuel. Pilot has filed for key permits for the Galveston LNG Bunker Port (GLBP), which would be located at one of the busiest maritime corridors in the United States in the center of the Houston, Texas City and Galveston ship channels. The company has yet to determine whether it would operate its own fleet of bunker vessels or seek out another company to do so.

“We have a proven track record of more than three decades supplying quality marine fuels to the shipping sector, and we continually adapt to meet our customers’ evolving needs,” said GAC Bunker Fuels’ Global Director Nicholas Browne. “This agreement with Pilot will allow us to grow our portfolio of alternative fuels, with LNG as the cleanest and most cost-effective way for shippers to meet compliance.”

CEO Jonathan Cook told NGI in August that the project would likely have a combination of customers that buy marine fuel on long-term contracts and a spot basis. Cook said Pilot would likely charge for the cost of service and delivery under any ex-ship deal. He also said buyers could possibly take fuel on a free-on-board basis under a tolling arrangement.

Demand for LNG bunker fuel is poised to grow. International regulators have tightened emissions standards, and the maritime industry has increasingly turned to LNG as a fuel source because of its lower emissions profile and cost competitiveness. The International Maritime Organization has established the goal of reducing greenhouse gas emissions from shipping by at least 50% by 2050 compared to 2008, and many LNG-fueled ships are expected to be produced going forward.

LNG marine fuel has grown significantly in places like Europe and Asia but more infrastructure is needed.

Japan’s biggest power producer and one of the world’s largest LNG importers said Wednesday it has launched an LNG bunkering business in the country. Via a joint venture with shipping companies Kawasaki Kisen Kaisha Ltd. and Nippon Yusen Kabushiki Kaisha, and trading firm Toyota Tsusho Corp., Jera Co. Inc. said it delivered LNG marine fuel on Tuesday to the vessel Sakura Leader, which is currently under construction. It was the first time LNG fuel has been supplied through ship-to-ship bunkering in Japan.

The fuel came from Jera’s Kawagoe Thermal Power Station, where facilities were modified in July 2018 ahead of the launch of the bunkering business.