Oil prices rose on Tuesday after a fire on a Petróleos Mexicanos (Pemex) processing platform in the Gulf of Mexico slashed 421,000 b/d from Mexico’s oil supply. 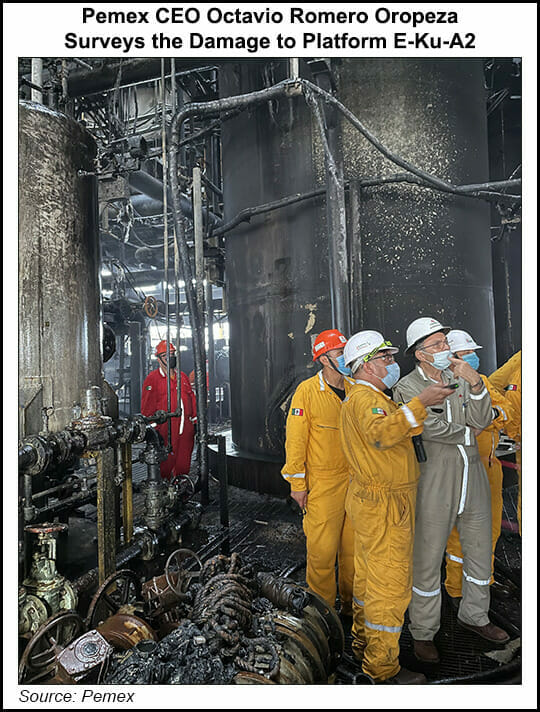 “Bottom pickers jumped into the void on the open on Sunday night, and then rode the Pemex 421,000 b/d platform fire for a two day gain of around 8% following a slide of 8.94% last week,” Mizuho Securities USA LLC’s Robert Yawger, director of energy futures said in a note to clients Tuesday regarding WTI prices.

The fire at the Pemex platform is also a negative for Gulf Coast refiners, Yawger said.

“U.S. refiners run Mexican crude oil for size, and several refineries are configured to maximize yields from Mexican crude oil.” Ultimately, he said, “refiners will have to pay more for feedstock, affecting the bottom line negatively.”

Gulf Coast refiners rely on Mexico’s heavy crude oil for around 38% of the imported crude they process. According to Bloomberg data, Valero Energy Corp., Phillips 66 and Chevron Corp. are among the largest U.S. buyers of Mexican crude so far this year.

Pemex CEO Octavio Romero Oropeza visited the E-Ku-A2 platform in the Ku, Maloob and Zaap (KMZ) megafield on Tuesday. An investigation is underway to determine the cause of the deadly blast, which led to the loss of at least five lives. He did not provide a timeframe for when the production would come online.

The three large KMZ offshore fields together are considered Mexico’s main oil area. In June, total production at KMZ was 617,311 b/d, or 37% of the country’s total production, according to data from upstream regulator Comisión Nacional de Hidrocarburos (CNH).

The fields also produce 694 MMcf/d of associated natural gas, or about 18% of Mexico’s total gas output. There were reports that a lack of natural gas for reinjection was impeding oil production at KMZ. Oropeza said electricity issues were to blame.

In a note on Tuesday, analysts at Fitch Ratings said the incident could make it “very difficult” for Pemex to reach its production goal “given the large amount of production that is currently offline.” During the first half of 2021, Pemex’s crude oil production averaged 1.726 million b/d. The goal was to reach 1.802 million b/d by the end of the year.

“An acceleration of the company’s production decline rate in mature fields will make it difficult to achieve its production targets and add more pressure to its already negative free cash flow,” Fitch analysts said.

Pemex said the fire was under control about an hour and a half after it started on Sunday afternoon. Four people who died were contractors who worked for Mexican oilfield services firm Cotemar, Oropeza said. Six people remained injured on Tuesday, with one person in serious condition.

The fire was the second major accident to afflict Pemex offshore operations in the KMZ field in as many months. In early July, images of an eye-shaped fire went viral on social media after electrical storms and a natural gas leak from a pipeline used to stimulate oil production ignited an undersea blaze. Unlike Sunday’s blaze, no one was killed or seriously injured.

As of Aug. 17, the company had reported 3,302 Covid-19 deaths among employees, retirees, family members and external contractors. Of that total, 587 people were actively employed at the time of diagnosis.

In 2019, a leak and subsequent explosion at a Pemex gasoline pipeline in Hidalgo state also left 137 dead. Pemex also is facing growing scrutiny for its poor performance on environmental, social and governance metrics, namely natural gas flaring and production of high-sulfur fuel oil.