Crude oil export volumes from the Gulf Coast should hit an all-time high in the second quarter, but that record shouldn’t last long, according to Rystad Energy. 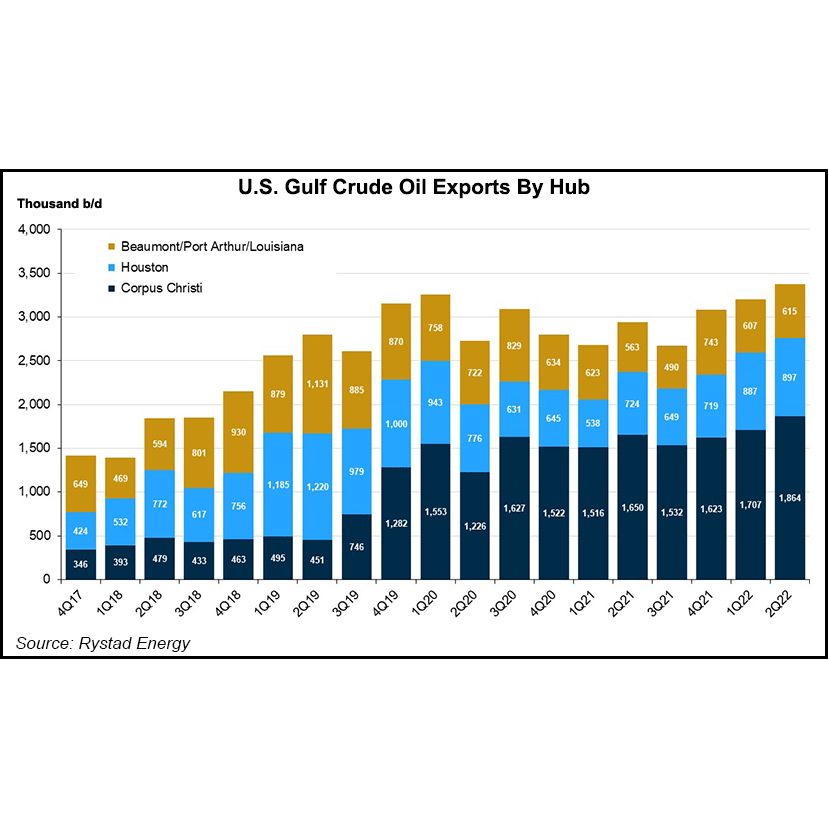 It means the United States can “support global markets amid the most challenging energy crisis in at least 30 years,” he said.

More than 95% of U.S. crude exports transit through ports in Louisiana and via the Texas ports of Beaumont, Corpus Christi, Houston and Port Arthur, according to Rystad.

Rystad singled out the Port of Corpus Christi as a “significant driver” of crude export growth, with projected 2Q2022 volumes of 1.86 million b/d, well above pre-Covid levels. The firm’s 2Q2022 estimate for Corpus exports would represent a 9% quarter/quarter increase.

“Port of Houston exports have also been rising since the third quarter of last year, but still fall short of their pre-pandemic levels,” researchers said.

Rystad predicted a “bright” future for Gulf Coast oil exports, with volumes from Louisiana and Texas ports “expected to accelerate in the coming years.”

The firm said its “base case” model anticipates volumes nearing 4 million b/d in 1Q2023 and crossing that threshold by 2Q2023, “thanks to strong SPR draws and a rosy domestic supply outlook.”

Based on loading and port inbound flow capacity, an even faster Gulf Coast oil export expansion is possible, said researchers. However, upstream and midstream bottlenecks, such as supply chain constraints and natural gas takeaway capacity expansion schedules in the Permian Basin, could soften the growth outlook.

“The likelihood of soaring exports could be deemed unrealistic as there is little that the nationwide U.S. supply chain can do to resolve existing labor and capacity challenges faster,” researchers said. “However, should supply chain challenges alleviate even somewhat in the first half of 2023, exports could rise beyond current forecasts.”