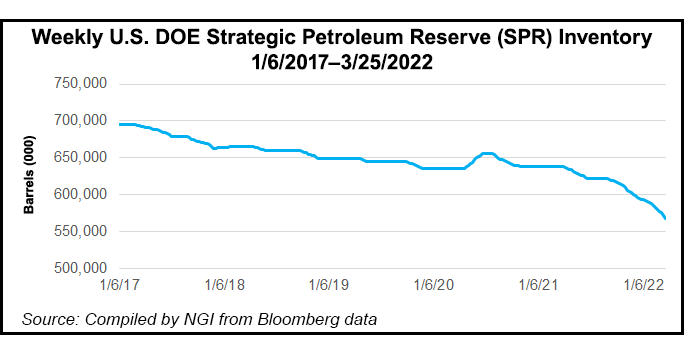 The White House said the release from the Strategic Petroleum Reserve (SPR) came after consulting “with allies and partners.” The “largest release of oil reserves in history would put 1 million b/d of additional supply on the market every day for the next six months,” officials said.

“The scale of this release is unprecedented,” said the Biden administration. “The world has never had a release of oil reserves at this 1 million b/d rate for this length of time.

“This record release will provide a historic amount of supply to serve as a bridge until the end of the year when domestic production ramps up.”

The Department of Energy (DOE) plans to use the revenue from the release to restock reserves “in future years,” said the administration. “This will provide a signal of future demand and help encourage domestic production today, and will ensure the continued readiness of the Strategic Petroleum Reserve to respond to future emergencies.”

Other countries “are expected to join in this action, bringing the total release to well over an average 1 million b/d,” officials said.

According to the Energy Information Administration, the U.S. SPR as of March 25 had more than 568 million bbl of oil stocks.

The White House put the blame for higher commodity prices squarely on the shoulders of President Vladimir Putin for his unprovoked invasion of Ukraine. It said, “Americans are facing rising prices at the pump because of ‘Putin’s Price Hike.’

“Since Putin accelerated his military build-up around Ukraine, gas prices have increased by nearly $1/gallon. Because of Putin’s war of choice, less oil is getting to market, and the reduction in supply is raising prices at the pump for Americans.”

After banning Russian energy imports in early March, President Biden had warned that the loss of Russian oil would come with a cost. He also has called on U.S. exploration and production (E&P) companies to ramp up output.

“The fact is that there is nothing standing in the way of domestic oil production,” the White House said. E&Ps during 4Q2021 conference calls cited many things impacting their ability to increase production, including supply chain issues and labor shortages.

“The United States is already approaching record levels of oil and natural gas production,” the Biden administration noted. “There are oil companies that are doing the right thing and committing to ramp up production now.

“Right now, domestic production is expected to increase by 1 million b/d this year and nearly 700,000 b/d next year. Still, too many companies aren’t doing their part and are choosing to make extraordinary profits and without making additional investment to help with supply.”

The administration specifically in its message on Thursday called out CEO Scott Sheffield of Pioneer Natural Resources Co., who runs one of the largest E&Ps in the Permian Basin. Noting Sheffield’s comments during the 4Q2021 conference call, the White House said, “One CEO even acknowledged that, even if the price goes to $200/bbl, they’re not going to step up production.”

The oil and gas industry “is sitting on more than 12 million acres of nonproducing federal land with 9,000 unused but already approved permits for production,” the administration noted.

President Biden called on Congress to make E&Ps pay fees on wells from their leases “that they haven’t used in years and on acres of public lands that they are hoarding without producing.

“Companies that are producing from their leased acres and existing wells will not face higher fees. But companies that continue to sit on nonproducing acres will have to choose whether to start producing or pay a fee for each idled well and unused acre.”

President Biden also made a “commitment to achieving real energy independence – which centers on reducing our dependence on oil altogether.”

The White House said the president would call on Congress “to speed the transition to clean energy that is made in America. His plan will help ensure that America creates millions of good-paying union jobs in clean, cutting-edge industries for generations to come.”

Specifically, the DPA would be used to “support the production and processing of minerals and materials used for large capacity batteries.” These include lithium, nickel, cobalt, graphite and manganese.

The White House announcement followed the OPEC-plus ministerial meeting. The Saudi-led cartel, which includes ally Russia, on Thursday resisted entreaties by the United States and other world powers to escalate oil production as the invasion of Ukraine continued.

During an online ministerial meeting that lasted less than 20 minutes, the cartel held steady – as expected – to a scheduled supply increase of 432,000 b/d in May. The gradual increase has been OPEC’s policy since last August. The policy sets a measured pace that gradually unwinds production cuts of nearly 10 million b/d made in April 2020 amid the pandemic.

Following the brief meeting, the cartel said “continuing oil market fundamentals and the consensus on the outlook pointed to a well balanced market, and that current volatility is not caused by fundamentals, but by ongoing geopolitical developments.” It plans to meet on May 5.

In reaction to the decision to release SPR oil, and to call for U.S. E&Ps to step up their output, the American Petroleum Institute (API) and other energy lobby groups expressed some concerns.

“There are many factors behind rising energy costs, from geopolitical volatility and supply chain constraints to policy uncertainty, and the American people deserve real solutions,” API CEO Mike Sommers said. “The SPR was put in place to reduce the impact of significant supply chain disruptions,” and even though the oil release “may provide some short-term relief, it is far from a long-term solution to the economic pain Americans are feeling at the pump.”

The U.S. Chamber of Commerce’s Marty Durbin, president of the Global Energy Institute, said the group agreed that domestic oil and gas production was “essential to relieving high fuel prices and to energy security for the U.S. and our allies.

“However, the administration continues to mischaracterize the obstacles to ramping up production, one of which is their own reluctance to process permits. American energy companies have paid significant funds for leases and have every incentive to produce energy where they can,” Durbin noted. “However, it takes years and many permits to explore for energy and even then, not every well drilled on a federal lease is ultimately suitable for energy production, which the administration continues to ignore.

“Further, punitive policies and rhetoric send exactly the wrong message to industry and its investors at a time when the Administration should be seeking to collaborate, not punish.”

The American Exploration and Production Council also criticized the administration. CEO Anne Bradbury said the administration was claiming it was “responding to ‘Putin’s Price Hike at the Pump’ but their planned solution is to target American energy producers with new taxes and fees, while our industry continues to face increased hurdles and regulatory red tape the Biden administration itself has put in place to restrict domestic production.”

What Would SPR Release Accomplish?

Ahead of the news to withdraw oil from the SPR, ClearView Energy Partners LLC said it was “hard to overstate the scale of this intervention…It would be the largest drawdown volume announced in the 45-year history of the SPR by a factor of 3.6 times, a statistic made even more remarkable by the fact that President Biden also ordered the second largest: a 50 million bbl in a combined sale and exchange on Nov. 23.”

Goldman Sachs analysts in a note to clients said a 1 million b/d release  “would help the oil market rebalancing in 2022…” It could “reduce the amount of necessary price-induced demand destruction, the sole oil rebalancing mechanism currently available in a world devoid of inventory buffers and supply elasticity.”

However, an inventory release is not a “persistent source of supply for coming years,” said the Goldman team led by Damien Courvalin. “Such a release would therefore not resolve the structural supply deficit, years in the making.”