A nonpartisan policy research group in Pennsylvania is doubling down on its assertion that the state would be better served by a severance tax on oil and gas, adding that Pennsylvania is getting “shortchanged” by the impact fee under Act 13, the state’s omnibus Marcellus Shale law. 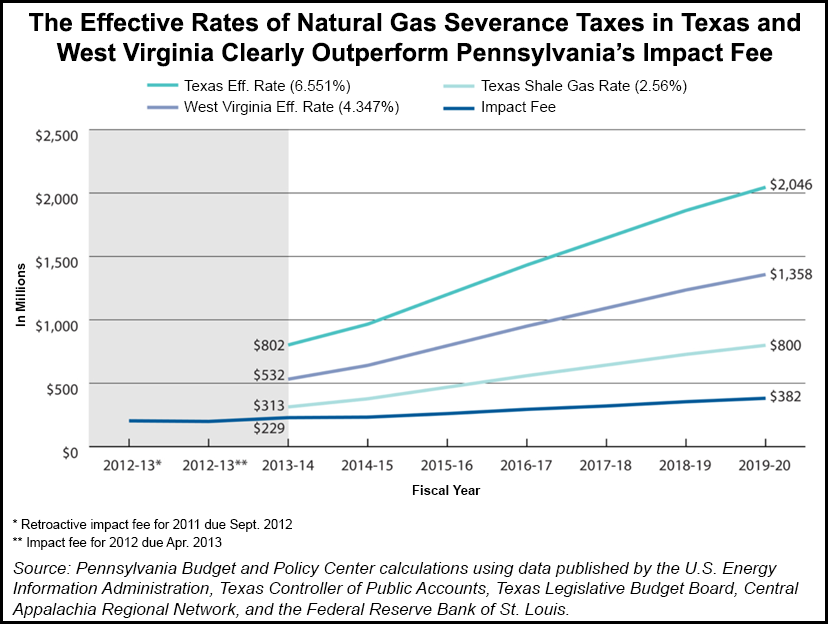 In a four-page position paper released last month, the Pennsylvania Budget and Policy Center (PBPC) said replacing the impact fee with a modest 4% severance tax could generate $1.2 billion annually by the 2019-20 fiscal year, an amount triple that of the current fee.

Other options, according to the PBPC, would be for Pennsylvania to adopt the severance tax rates of either Texas or neighboring West Virginia.

Citing various incentives and adjustments in both states, the organization said the severance tax rate for Texas came out to about 6.5%, while in West Virginia the rate was about 4.3%. Under those scenarios, the PBPC said Pennsylvania could see a revenue gain of $2.41 billion by the 2023-24 fiscal year using Texas’ rate, and $1.45 billion using West Virginia’s.

“Both West Virginia and Texas get a better deal for their citizens from the development of a one-time and non-mobile than Pennsylvania does,” the PBPC said. “If Pennsylvania were to replace its impact fee with a severance tax rate comparable to those in effect in either Texas or West Virginia, there would be a substantial revenue gain.

“At a time when state tax revenue collections are stagnant and lawmakers are looking for additional revenue to prevent further cuts to education, health care, human services, and infrastructure, Pennsylvania should replace its current ineffective drilling impact fee with a reasonable natural gas severance tax.”

The PBPC said that under a “moderate” production scenario — assuming 1,400 new wells per year, coupled with gas prices adhering to the most recent forecast by the U.S. Energy Information Administration (EIA) — Pennsylvania would collect $382 million in impact fee revenue by the 2019-20 fiscal year. By comparison, West Virginia and Texas would collect $1.36 billion and $2.05 billion, respectively.

“As production increased over time, the gap grows larger between the revenue generated at the West Virginia of Texas tax rates and from Pennsylvania’s impact fee,” the PBPC said.

The gap remains even under a lower scenario that assumes 1,100 new wells per year and a low future natural gas price of $3.00/Mcf. Under that scenario, Pennsylvania would collect $332 million in impact fee revenue by the 2019-20 fiscal year, but West Virginia and Texas would collect $715 million and $1.07 billion, respectively, through their severance taxes.

It’s not the first time the PBPC has come out in favor of a severance tax. Last year, the group said Pennsylvania could have collected nearly twice the revenue it received in impact fees on Marcellus Shale natural gas drilling if it had implemented a severance tax instead (see Shale Daily, Sept. 17, 2012).

Patrick Henderson, energy executive to Pennsylvania Gov. Tom Corbett, said the impact fee has generated $406 million in the past 10 months and added “these funds are benefiting all Pennsylvanians, right now.

“It’s not surprising that the PBPC wants to adopt a severance tax. They would rather value an industry by how much they pay in taxes rather than the jobs they create. Gov. Corbett would rather help create jobs than create new taxes.”

The impact “fee” was conceived as an end-around to gain support from Republicans, who, in line with the conservative Tea Party, steadfastly refused to consider any new taxes (seeShale Daily, Feb. 8, 2012). During the gubernatorial campaign in 2010, Corbett said he would not support a severance tax.

According to the Washington, DC-based Resources for the Future’s Center for Energy Economics and Policy, 26 of 31 states surveyed levy severance taxes on natural gas. Of those, 18 states — including Texas, West Virginia and Wyoming — levy a severance tax based on a percentage of the market value of the gas extracted, while five states — California, Louisiana, North Carolina, North Dakota and Ohio — levy a tax based on a fixed dollar amount. Three states — Indiana, Oklahoma and Utah — use a hybrid system.

Last week, U.S. Rep. Allyson Schwartz (D-Jenkintown), who has declared her candidacy for the gubernatorial race in 2014, said she would enact a 5% severance tax on natural gas if elected, adding that over a decade such a tax could generate $13.2 billion in revenue for the state (see Shale Daily, Sept. 6).