Further “green shoots” are emerging in the liquefied natural gas (LNG) market as buyers and sellers ink more long-term supply deals after a stretch of inactivity over the past two years amid a supply glut and the pandemic, according to Evercore ISI. 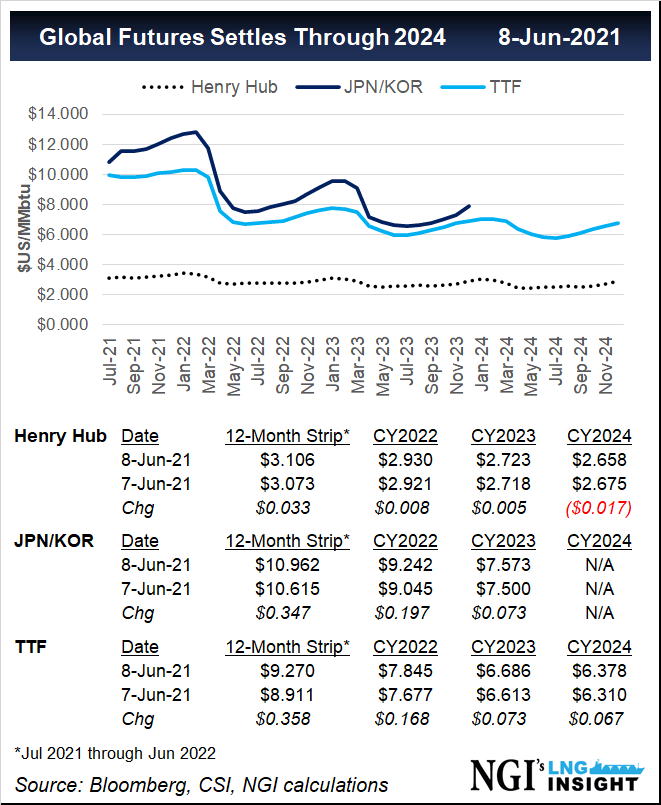 Evercore analysts led by Sean Morgan said Tuesday the European Title Transfer Facility (TTF) and Japan-Korea Marker (JKM) benchmarks are up by more than 400% since they hit a low point last summer.

“Short of a warm winter, we expect global gas prices to remain well supported, increasing the likelihood that additional long-term LNG deals are announced over the next several months,” the Goldman analysts said.

Evercore said the market for SPAs has changed in recent years as the LNG trade has become more commoditized. Shorter-term deals are more common. While 20-year supply terms were previously the norm, five- or 10-year deals are becoming more common.

Tellurian Inc. recently signed 10-year deals to supply Gunvor Group Ltd. and Vitol Inc. each with 3 million metric tons annually from the proposed Driftwood terminal in Louisiana. Unlike older U.S. supply agreements, the deals are not linked to Henry Hub prices. Instead, Gunvor and Vitol would pay prices indexed to TTF and JKM, netted back to the Gulf Coast to exclude shipping costs. The deals also do not include fixed fees.

Evercore said Tellurian is essentially taking the spread risk between Henry Hub, JKM and TTF, which is typically healthy. Still, Morgan and his team noted that the spread collapsed last summer amid a global supply glut, lackluster demand and low prices across the world.

“Tellurian believes that the retirement of coal in Europe and increasing carbon costs in the form of emissions trading systems will put a floor above U.S. gas source pricing,” the firm added. “Though in the course of 10 years, Tellurian might be subjected to commodity risk, which is somewhat novel for investors in U.S. Gulf LNG liquefaction and export, where Henry Hub had traditionally been a pass-through with the customers/buyers bearing the commodity price risk.”

Even if SPAs are a leading indicator for final investment decisions (FID), project sanctioning has been slow to bounce back. The International Gas Union said last week about 139 million tons (Mt) of annual liquefaction capacity was under construction or sanctioned for development as of February. The trade group said only 8.9 Mt of that total is expected to come online this year.

Despite grimmer predictions that no FIDs would be reached this year, Evercore noted that Qatar sanctioned the massive North Field East expansion. Santos Ltd. also is moving ahead with a $3.6 billion development in the Timor Sea to extend the life of the Darwin gas export facility in Australia.

For now, the market appears balanced. Global LNG imports hit 31.9 Mt last month, up 9.1% from the same time last year, according to Bloomberg New Energy Finance. Over the same time, exports were 32.5 Mt, up 9.8% year/year.

LNG supply during May came in above Goldman’s projections, mainly driven by the United States despite downtime for maintenance in the second half of the month. Maintenance in the United States and other LNG-producing regions is expected to curb LNG supply this month, Goldman added. NGI data shows that trend is already taking shape as feed gas deliveries to U.S. terminals have hovered below 9 Bcf/d since Sunday. Nominations to the terminals were at 8.80 Bcf on Tuesday after weeks of deliveries that peaked well above 11 Bcf/d.