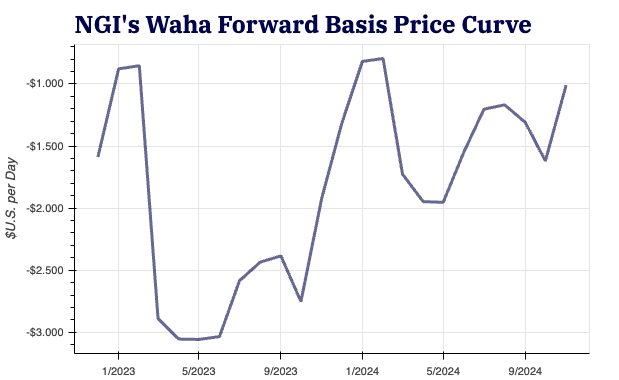 BP is the largest natural gas marketer in North America, and was among the first non-state marketers to enter Mexico after the country’s 2013 energy sector liberalization.

Although U.S. prices have surged over the last year, they remain far cheaper than in gas-starved Europe and Asia.

“This is one of the cases where the grass is greener in your backyard,” Elio told the audience. “While the price is not cheap, it’s very economic compared with the rest of the market with which you compete…”

But can Mexican industrials transport that cheap U.S. gas to their production facilities? “The answer is yes,” Elio said.

He noted that there is some 12 Bcf/d of cross-border pipeline capacity in operation, while Mexico’s internal demand is only about 8 Bcf/d.

However, improvement is needed in terms of regulatory stability and access to firm transportation capacity, Elio said.

Mexico’s Centro Nacional de Control del Gas Natural (Cenagas), operator of the Sistrangas national pipeline grid, has made “tremendous improvements” since its creation in 2014, Elio said. “It’s got a very talented young team,” he added, explaining that the invoicing and nominations processes run smoothly and there is always someone to answer any questions that shippers may have.

However, “What we see missing is firm capacity,” Elio said. In its eight-year history, Cenagas has held only one open season for firm transport capacity.

“There is available capacity” on the Sistrangas, Elio said, “but it’s not getting used.”

As a result, industrials that are looking to expand their operations are forced to rely on interruptible capacity.

One BP industrial client, for example, is planning a $500 million expansion of its operations, underpinned entirely by interruptible gas supply. “These guys are aggressive,” Elio said. “Imagine how much more investment there would be if there [were] access to firm capacity.”

He noted that state power company Comisión Federal de Electricidad (CFE) has ceded much of its Sistrangas capacity  following the start of operations on CFE-anchored pipelines such as Sur de Texas-Tuxpan and Wahalajara.

However, there has been no action by authorities to make the relinquished capacity available to the market.

Also speaking at the event was Guillermo Turrent, former CEO of CFE International LLC and CFEnergía, the respective international and domestic fuel marketing arms of CFE.

The lack of access to firm capacity for shippers is “unacceptable to me,” Turrent said, explaining that it would be in the best interest of Cenagas and the market at large to optimize unused pipeline space.

Despite the challenges, industrials in Mexico are finding a way to procure gas under attractive commercial terms, Elio said.

“What we see in the market is industrials used to contract for one year,” Elios said. “They’ve gotten very comfortable with the market and they’ve started to ask for two years, three years…We have some industrials now contracting through 2027. They’ve gotten a lot more sophisticated…”

He said that large gas buyers now are seeking longer-term, fixed-price contracts and using hedging instruments to protect against volatility. Speakers at the forum also noted that rising U.S. LNG export volumes over the coming years will likely lead to more competition for molecules, potentially driving up prices in Mexico.

Mexico consumers also are beginning to factor greenhouse gas emissions into their gas portfolio in order to lower their own indirect climate footprint, according to Elio.

Lenton highlighted the resiliency of Mexican demand for natural gas despite wild price swings over the last year.

“Imports of natural gas haven’t changed in Mexico” despite prices doubling versus last year, “and so that shows that demand is somewhat certain in Mexico,” Lenton said. 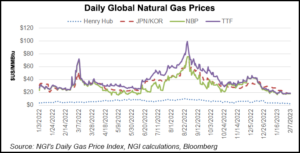 While the early LNG market mostly developed in Asia and the Middle East, the super-chilled fuel was first commercialized in the United States and Europe.