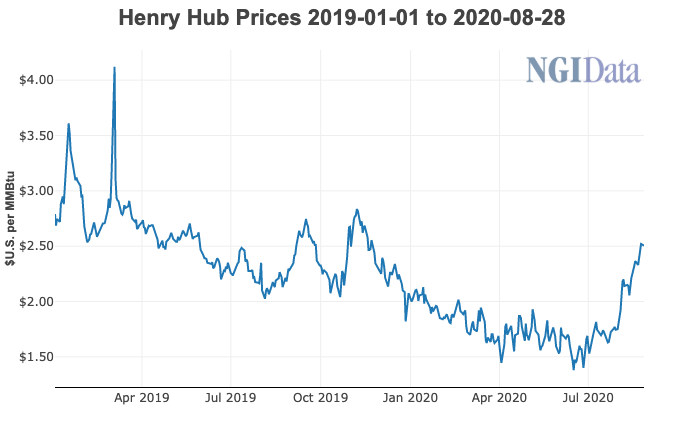 The Interior Department’s Bureau of Safety and Environmental Enforcement at midday Friday said 60% of natural gas produced in the Gulf of Mexico (GOM) remained shut-in while 84% of total oil output was offline. The information was based on reports from 45 offshore operators.

GOM operators were inspecting their platforms and rigs to determine when they could safely begin restarts and deploying staff.

Royal Dutch Shell plc, one of the largest producers in the deepwater, early Friday said eight of its nine operated assets were shut-in. The ninth asset, the Perdido in the southwestern GOM, was not shut-in and remained fully operational.

“Inspections of all assets potentially affected by the storm will be conducted as soon as the weather permits, in order to determine when we will be ready to safely re-deploy personnel and resume operations,” a Shell spokesperson said. “Our drilling operations are in the process of restarting.”

Another mega offshore operator, BP plc, on Friday was preparing to inspect its four operated facilities in the deepwater “for any potential damage resulting from hurricanes Marco and Laura.”

Production was to remain shut-in, said a spokesperson, “until we have confirmation that our platforms are able to operate safely, pipeline companies have confirmed the operability of offshore pipelines, and the shore-based transportation and receiving systems are working as necessary.”

Weather permitting, overflights for the BP facilities were to begin Friday. “At this time, we cannot predict how long this process will take…Safety is our top priority as we move forward and determine next steps.”

Laura made landfall in Cameron Parish, LA, at around 1 a.m. Thursday as a Category 4 storm, bringing with it 150 mph winds, pounding rain and a storm surge.

In an assessment issued early Friday, the Department of Energy (DOE) said there were 739,319 outages across the states of Louisiana, Texas, Arkansas, Mississippi, and Tennessee as a result of Laura. At one point Thursday, more than 830,000 customers were without power.

“Now that Laura has passed, utilities are beginning damage assessments and restoration efforts as conditions permit,” DOE said. “Some of the hardest hit areas are still not accessible due to flooding and/or debris. Mutual assistance networks have been activated, with more than 20,000 personnel from over 28 states, the District of Columbia, and Canada supporting restoration efforts.”

The ports of Lake Charles, LA, as well as the Texas ports in Beaumont and Port Arthur remained closed early Friday. The massive Louisiana Offshore Oil Port, aka LOOP, also had  suspended operations at its marine terminal. The LOOP is the U.S. port capable of receiving very large crude carriers, or VLCCs. The port’s Clovelly Hub deliveries remained normal.

All of the country’s major refineries, centered in the Beaumont/Port Arthur and Lake Charles regions, had shut-in operations in advance of the storm, resulting in 2.4 million b/d of domestic capacity, or 13%, to be offline.

ExxonMobil said Friday its initial assessment of the massive Beaumont refinery and petrochemical complex “revealed the need for only minor repairs, and we have begun restart activities.

“Timing on when operations can resume to normal will depend largely on the availability of power, product transportation infrastructure and the reopening of the Sabine Neches Waterway.” The Baytown, TX, complex and Baton Rouge, LA, facilities “continue to operate safely and reliably.”

DOE said the Gulf Coast refineries overall export 20% of production to foreign countries, which “provides a significant ‘export buffer,’ allowing refiners to shift fuel production away from exports to make up for shortages in domestic markets.”

Refinery and offshore platform shut-ins “are not anticipated to cause any immediate supply issues,” DOE said. “For the week ending on Aug. 21, overall U.S. stocks of gasoline and distillate were 4.7% and 24.7% above the seasonal five-year average.” Jet fuel was slightly below the average, but within the five-year range.

As far as damage to onshore processing and pipeline projects, preliminary assessments were underway, but few had issued updates at midday Friday.

Houston-based Westlake Chemical Partners LP, which operates an ethane and propane processing project in Lake Charles, said restarting the facility would depend on when electricity and feedstock were available.

Initial facility assessments indicated “limited physical damage. Restart of OpCo’s facilities, which were shut down as a precautionary measure in advance of the storm, will primarily depend upon the availability of electricity, industrial gases, and other feedstocks.”