Assessments by oil and gas operators were expected to take a few days after Hurricane Laura, a Category 4 monster, stormed ashore in the wee hours of Thursday, with more than half a million customers without power at midday across Louisiana, Texas and beyond. 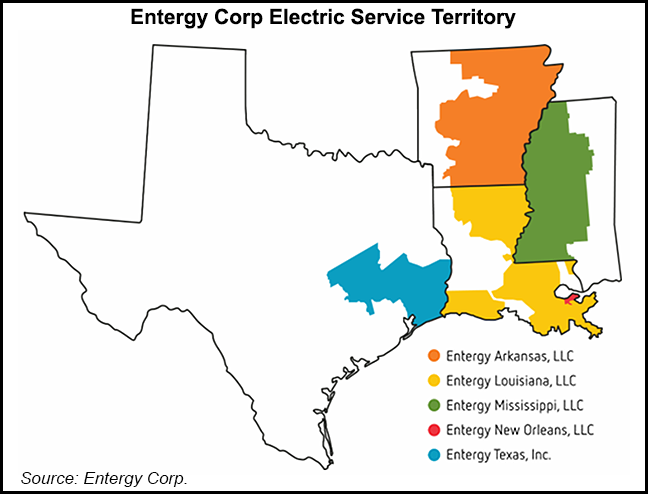 The National Hurricane Center in a special statement at noon said Laura was downgraded to a tropical storm after winds dropped to 70 mph about 59 miles southeast of Shreveport, LA. At least four people reportedly died in Louisiana.

Oil and gas industry groups were awaiting damage assessments from operators on Thursday, according to the American Petroleum Institute (API), National Ocean Industries Association (NOIA) and the American Fuel and Petrochemical Manufacturers (AFPM). Officials held a conference call on Thursday.

“We’re still waiting and hoping that the infrastructure and the communities in which we’re operating in Louisiana and far east Texas have not been significantly impacted by Hurricane Laura,” API’s Suzanne Lemieux, operations and emergency response manager, told reporters.

“We are concerned, certainly, but our members made significant preparations for this storm and its landfall as they started earlier in the week with the Tropical Storm Marco, evacuating people from offshore facilities, shutting in refineries and taking the steps that are necessary to protect those assets and infrastructure from potential hurricane damage.”

The storm surge has been the biggest concern from an onshore perspective, said Lemieux. “Saltwater does a lot of damage to equipment, [and] even brackish water. Refineries aren’t meant to be underwater, and so that’s…the biggest concern.”

NOIA President Erik Milito noted that the U.S. Gulf of Mexico (GOM) was supplying 2 million b/d of oil production as recently as February, highlighting the segment’s strategic importance for the country.

Milito said about 1.55 million b/d of oil production and 1.6 Bcf/d of gas output had been shut in across the GOM ahead of the storm. Damage reports from offshore operators were still pending.

Joining Lemieux and Milito on the call was the AFPM’s Jeff Gunnulfsen, senior director for security and risk management.

“We were lucky,” Gunnulfsen said, “that we could see this storm coming and were able to take action early.” He noted that about 3.5 million b/d, or potentially one-fourth of U.S. refining capacity, sits between Beaumont, TX, and Lake Charles, LA, “and much of that capacity had been slowed or idled in advance of landfall.”

Gunnulfsen said about 29% of the country’s ethylene production was also shut down ahead of the storm.

More information on damage assessments is likely in the next few days as operators are able to assess their facilities.

“The good thing is damage assessments are being done faster by our industry because many of our members will be using drone technology and government agencies are sharing aerial recon images much faster and more [openly] than they used to in the past.”

Utilities in the region as of noon on Thursday reported at least 650,000 customers were without power in Louisiana and Texas. New Orleans-based Entergy Corp. warned that electricity customers in the hardest hit areas could see “outages for weeks,” with restoration hampered by flooding, blocked access or other obstacles.

Entergy, which delivers electricity to 2.9 million utility customers in Arkansas, Louisiana, Mississippi and Texas, early Thursday had 280,279 reported outages. Close to 172,000  were without power in Louisiana, including nearly 84,000 in hard hit Calcasieu Parish, where Laura came ashore. More than 106,000  customers along the Upper Texas coast also were without power.  Arkansas outages were expected to increase as the storm swept through carrying 40-50 mph winds and up to eight inches of rainfall.

In addition, Pineville, LA-based Cleco Corporate Holdings LLC, which serves 290,000 customers across Louisiana, said nearly 129,000 were without power as of early Thursday.

Damage from the hurricane led to a fire on Thursday at the BioLab Inc., a chlorine production complex in Westlake, LA, four miles west of Lake Charles. Emergency responders were on scene by noon.

Residents in the area were ordered by Gov. John Bel Edwards to shelter in place, turn off air conditioning and close windows and doors. No injuries had been reported and all of BioLab’s employees were confirmed to be safe.

BioLab parent Kik Custom Products said a specialized team was working with local first responders “to contain and mitigate the impact of this incident as quickly as possible,” a spokesperson said. “Our priority is the safety and well-being of the Lake Charles community of which we are a part.”