Natural gas prices have been converging globally since 2005 and even more rapidly last year as spot pricing in the Asia Pacific increased, the International Gas Union (IGU) said in a new survey. 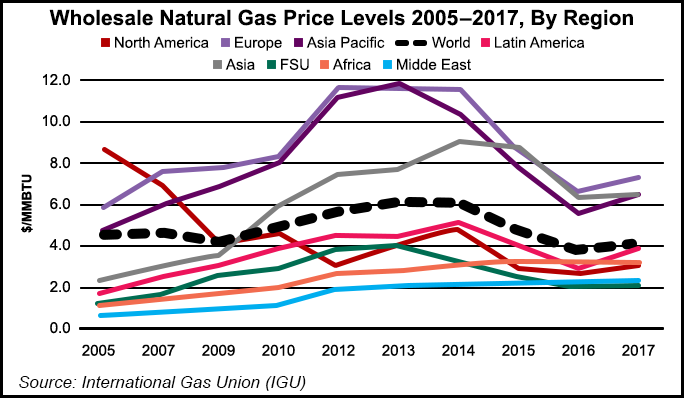 Despite conventional wisdom based on regional markers that include Henry Hub, the National Balancing Point and Japanese import prices, prices have been converging for 13 years, the IGU said in its 10th Wholesale Gas Price Report, based on responses for countries that cover 92% of total world consumption.

The survey was issued on Thursday in conjunction with the 2018 Global Gas Report by Italian grid operator Snam SpA, IGU and The Boston Consulting Group (BCG) at the World Gas Conference (WGC) in Washington, DC.

“In all, gas-on-gas competition can now be found in 54 countries, in one form or another, and in all regions of the world.”

The share of competition rose between the 2016 and 2017 surveys, reflecting in part the increasing use of spot prices for liquefied natural gas (LNG) in the Asia Pacific. Besides LNG spot prices gaining favor, other reasons contributing to more competition included a:

Overall, the pipeline trade “has seen a continuous shift to gas-on-gas competition, but oil price escalation has largely held its share in LNG trade.”

Wholesale price levels in most regions reached their peak in 2013 or 2014, according to the survey.

“This rise was across all regions apart from North America, where the dramatic increase in shale gas supply has led to sharp falls in prices — with a small rebound in 2013,” said researchers.

The rise in gas prices in Europe and Asia Pacific already has been documented, but prices have also risen in Asia, as prices increased in China, “both as more gas was imported and regulated domestic prices increased, and in India for similar reasons.”

In the 2018 Global Gas Report, the second edition also issued at WGC, researchers found that more than 90% of worldwide gas consumption’s growth to 2040 is expected to be from cities.

“This report showcases the excellent prospects for natural gas over the next few decades, particularly within urban environments,” said IGU President David Carroll. “Natural gas combines high heating intensity and efficiency with low emissions and virtually no pollution, all while delivering energy for almost any use.

“These qualities make it unique as an abundant, flexible and cost-effective fuel, which can also address the environmental challenges in urban environments. Combined with growing urbanization trends, this presents a significant opportunity for continued gas demand growth.”

Last year, “was an impressive year for gas demand growth, supported by increased LNG market liquidity and the growing role that gas is playing to meet more sustainable energy supply,” according to the report.

However, to continue the growth trajectory, industry and policymakers need to “cooperate on ensuring the competitiveness, availability and sustainability of gas, and to focus on the special role that gas can play in cities.”

This year’s report “showcases the valuable role of natural gas as an energy source in the global energy mix and for ensuring energy security around the world,” said BGC’s Ivan Marten, vice chairman of the energy practice. “The report also points out the need for concerted actions from a variety of stakeholders. These include the development of new business models and technologies from gas industry participants, effective policies from governments, and sustained capital commitments from financial institutions.”

Virtually all major scenarios by government and private experts see gas consumption growing in the long run and for gas to overtake coal as the second leading source behind oil of global energy consumption by 2035. Most forecasters expect gas to grow to more than 24% of the global energy mix by 2035 from the current 22%, the report noted.

There are three core drivers for gas consumption to increase, said researchers.

Improving the relative cost of gas to other energy sources would improve cost competitiveness “through a combination of LNG cost efficiencies, pricing environmental externalities, and promotion of local gas production in markets around the world.”

Researchers said improving cost competitiveness was particularly important considering that more than 75% of forecast demand growth by 2040 would be from developing regions of the world.

In addition, there needs to be security of the gas supply, the authors said, by developing “enhanced networks and infrastructure, more flexible commercial models and new modular access-enabling technologies.”

Rapidly developing gas infrastructure in Asia and Africa “will be critical given the lack of access to gas in those regions today.”

“Gas offers significant opportunities for more sustainable development,” said Snam CEO Marco Alverà. “It will provide clean, reliable and affordable energy to millions of people in the developing world. Moreover, 90% of global gas growth is set to come from urban areas. That means that, as penetration grows in power generation, heating and transport, gas will help cities to become cleaner.

“The flexibility of gas and the ease with which it can be transported and stored make it an ideal partner for the growth of renewables. And gas is well on the way to becoming a renewable energy source itself, thanks to the development of green gas technologies. The challenge of securing growing amounts of energy that’s cleaner and cheaper will only be met by working together across industries and geographies.”