Natural gas prices in Asia and Europe moved higher Monday despite growing concerns over a new variant of Covid-19 that weighed on commodities late last week. 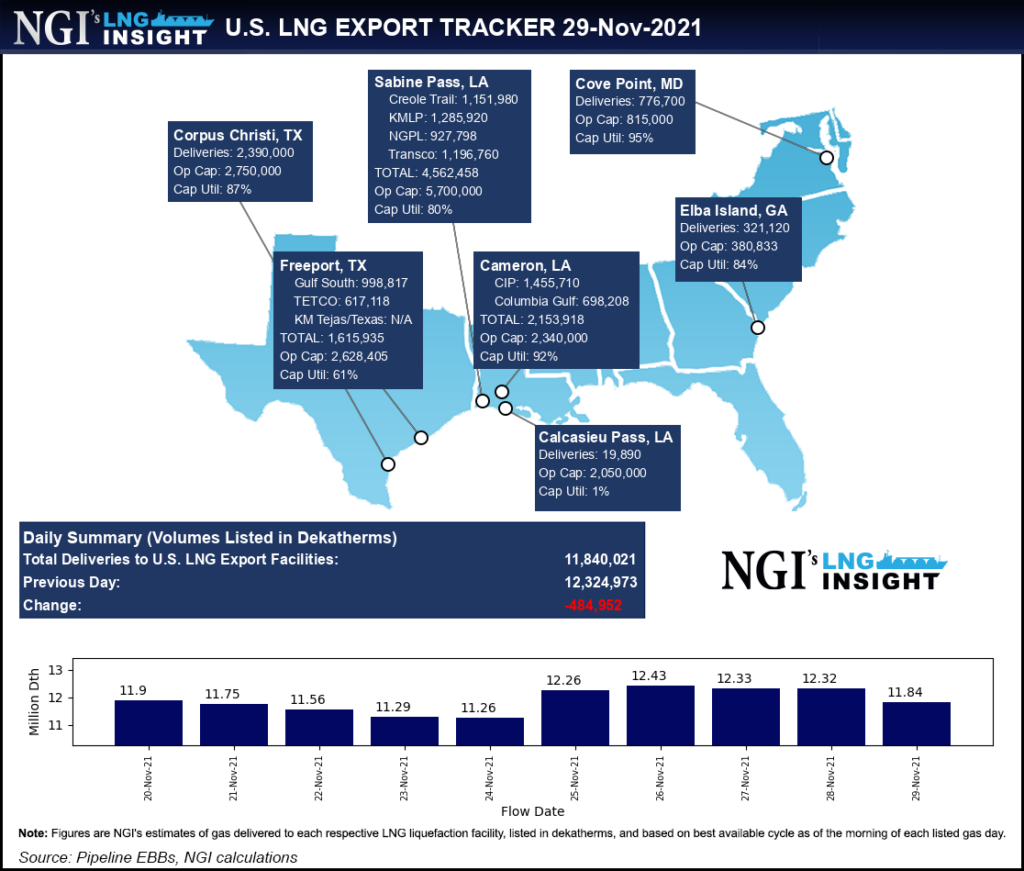 A colder shift in the forecast and a reduction in pipeline imports in Europe were supporting prices as traders continue to monitor the potential impacts of the Omicron variant on demand. Both British and Dutch futures closed higher Monday.

“The market will continue to follow the situation this week, while keeping an eye on potential lockdown measures,” trader Energi Danmark said in a note Monday of the variant’s spread.

Below normal temperatures are expected in France, Germany, Spain and the Balkans in the coming days, while colder weather is also forecast to persist in the UK, France and Germany over the next two weeks, according to Maxar’s Weather Desk. Norwegian pipeline flows were also down Monday as were imports on the Yamal-Europe pipeline at the Mallnow entry point in Germany.

Fundamentals remain largely unchanged from where they’ve been in recents weeks. Natural gas in storage across Europe is at nearly 70% of capacity compared to the five-year average of 87%.

Spot prices in North Asia saw similar gains Monday as colder weather has driven heating demand and spot buying has remained firm despite high prices that have sidelined some buyers. Spot prices for delivery in the second half of December were assessed on Monday at around $35/MMBtu.

Supply issues in places such as Australia and Malaysia have also tightened the market, while leading buyers in the region plan to keep stocks up this winter to avoid the shortages of last season. Jera Co. Inc., Japan’s largest power producer, said in a statement last week that it would continue to “maintain a higher inventory level” of liquefied natural gas (LNG) “during the heavy-load winter period.”

Rystad Energy Analyst Lu Ming Pang said an earlier-than-expected freeze along the Northern Sea Route could impact the passage of Russian cargoes from Yamal LNG to Asia. He added that the La Niña weather pattern that originates in the Pacific Ocean could intensify the cyclone season in Australia and disrupt loadings in the coming months.

The tighter LNG market, Timera said, has prompted Asian buyers to offer higher prices for cargoes to attract additional supply. That has increased the average voyage distance and clogged shipping arteries including the Panama Canal. Higher freight rates have caused “Asian prices to move even higher due to higher diversion costs from incremental sources of LNG,” Timera said.

The December contract rolled off the board on Friday with a 37.9-cent rally, a move EBW Analytics Group senior energy analyst Eli Rubin characterized as a “settlement-induced price spike” that had little fundamental push behind it.

In other developments last week, U.S. Sen. Elizabeth Warren (D-MA) sent letters to CEOs of  almost a dozen of the nation’s leading natural gas producers questioning low production levels and soaring natural gas exports as utility bills are increasing across the country. Warren echoed the concerns of manufacturers as commodity prices continue rising across the U.S. and the rest of the world.

Oil prices also bounced back Monday after falling by more than $10/bbl Friday on uncertainty surrounding the Omicron variant. Brent crude for January delivery jumped 72 cents to finish at $73.74/bbl Monday. The increase came as speculation grew over whether the Organization of the Petroleum Exporting Countries and its allies will decide at a meeting later this week to stop output increases.