More than 75% of new liquefied natural gas (LNG) global supply could be at risk because of quickly expanding renewable energy resources, according to an analysis by Wood Mackenzie. 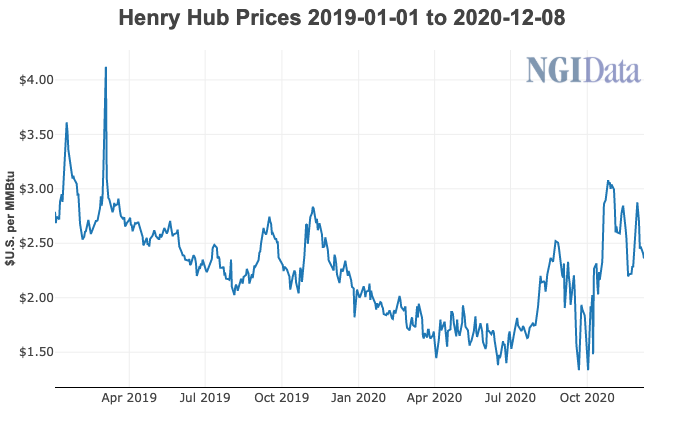 In a forecast issued on Wednesday, the consultancy said its scenario for worldwide gas demand is going to come under pressure as power sector investments increase in renewables and energy storage. More gas consumption also would be sapped by efficiency improvements and as new technologies are adopted beyond the power sector.

The scenario laid out by the Wood Mackenzie team is tied to greenhouse gas reduction goals set by the United Nations, which have been adopted by most developed nations. The basic goal is to keep global temperatures from rising above 2 degrees C to reduce the impacts from climate change.

Among the alternative options, look for hydrogen to play a bigger role in the world’s energy mix, which also would pressure gas demand. Green hydrogen could become a “gamechanger in the long term, emerging as a key competitor to gas consumption toward the end of 2040 and achieving a 10% share in the total primary energy demand by 2050,” researchers said.

Using the 2 degree scenario, “only about 145 billion cubic meters/annum (bcma) of additional LNG supply is needed in 2040 compared to 450 bcma in our base-case outlook,” Filippenko said. “And if we consider imminent FID for Qatar North Field East expansion, the space for new projects shrinks to 104 bcma, down 77% from our base case.”

Russia and Qatar “are expected to be frontrunners to fill the modest supply gap, while low Henry Hub prices would also mean competitive U.S. LNG projects. But as Qatar and Russia pursue monetization of their low-cost resource base, and LNG demand starts declining post 2035, the strategic rationale for others to invest becomes questionable.”

Wood Mackenzie’s Global Gas Model suggests that in the 2-degree scenario, “only a few Australian backfill projects will go ahead,” which would put the country lower on the list of top gas exporters.

Meanwhile, expanding LNG capabilities in Canada, including the Royal Dutch Shell plc-led LNG Canada underway, and in Mozambique by ExxonMobil and others would put Australia lower on the list of top gas exporters.

“As LNG demand starts declining post 2035, U.S. LNG underutilization will be required to balance the market, similar to what has happened in 2020,” according to researchers.

Wood Mackenzie research analyst Evgeniya Mezentseva said the gas export developers “will have a difficult decision to make. On the one hand, there will be windows of opportunities for investment decisions. But on the other hand, the long-term value of these investments might be at risk by the prospects of a shrinking market space combined with competitive pressure from lower-cost producers.”

Projects likely to be most impacted under the 2-degree pathway “are discovered pre-FID developments,” researchers said. By 2040, production from the projects is forecast to be about 1,300 bcm less than Wood Mackenzie’s base-case outlook.

Low prices then could wipe out investments in “more economically challenging projects,” with the survivors made up of those that are cost efficient and flexible.

“Compared to our base case, the 2-degree scenario will leave about 12 trillion cubic meters of discovered gas resources stranded,” said Filippenko. “This is more than three times the amount of gas produced globally in 2020.

“Most of this will be in the U.S., Russia and the Middle East. These regions will face decreasing export opportunities for their vast gas resources in addition to lower domestic demand for gas.”