The oil and gas industry is lionizing George Phydias Mitchell, 94, who died at his home on Friday in Galveston, TX. Mitchell is credited with pioneering unconventional drilling techniques that have opened up North America’s natural gas and oil potential. 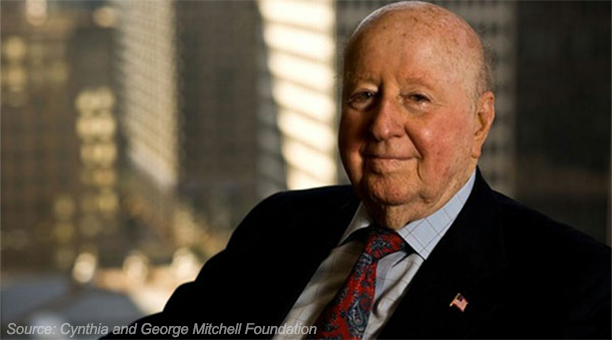 The son of Greek immigrants, Mitchell was born May 21, 1919, and built and later sold his oil and gas empire, Mitchell Energy & Development Corp., to Devon Energy Corp. for $3.1 billion in 2001 (see Daily GPI, Aug. 15, 2001). The company was responsible for more than 350 natural gas and 200 oil discoveries. During Mitchell’s oil and gas career, his company participated in drilling close to 8,000 wells, including 1,000 wildcats.

Mitchell died of natural causes surrounded by his family.

“His story was quintessentially American,” the family said in a statement. “George P. Mitchell was raised as a child of meager means who, throughout his life, believed in giving back to the community that made his success possible and lending a hand to the less fortunate struggling to reach their potential.”

The family said he and wife Cynthia Woods Mitchell, who died in 2009, raised 10 children, and had “collaborated on myriad projects — all dedicated to making the world a more hospitable and sustainable place…He will be fondly remembered for flying in the face of convention — focusing on ‘what could be,’ with boundless determination — many times fighting through waves of skepticism and opposition to achieve his vision.

“Whether it was graduating first in his class at Texas A&M University, developing the first master-planned community, pioneering the technology that unleashed the shale gas boom, working to create a more sustainable planet, restoring the historic area of Galveston, or just fishing with his family, he had the right mix of vision, optimism and tenacity, and a love for his fellow man. We are and will forever be grateful for the gift of this remarkable life. There’s no doubt that he helped make this world a better place.”

Mitchell’s knack for finding gas and oil made him a billionaire, but he also is considered one of the most generous philanthropists in the Greater Houston and Galveston area.

He graduated from Galveston’s Ball High School and then attended Texas A&M University. To help pay for schooling, Mitchell started a small laundry business, and he sold candy and stationery to fellow students.

Mitchell graduated in 1940 first in his class at A&M, then known as the Texas Agriculture and Mechanical College, with a degree in petroleum engineering and a specialty in geology. Cynthia Woods a few years later became his wife.

After serving as a captain in the U.S. Army Corps of Engineers in World War II, Mitchell began his career as an independent oil and gas consultant. Together with brother Johnny and wildcatter Merlyn Christie, he formed Oil Drilling Inc., the predecessor to Mitchell Energy.

Mitchell had long believed that natural gas could be extracted economically from shale, well before anyone thought it was possible. Through many attempts and successes and failures he honed the techniques to combine horizontal drilling with hydraulic fracture (frack) stimulation. His company made its mark in the late 1980s in the Barnett Shale, the grandfather of all the onshore gas plays. Today, Mitchell is considered the pioneer of unconventional drilling, which launched the shale gas revolution. He was honored with Gas Technology Institute’s Lifetime Achievement Award in 2010.

Earlier this year the Texas Legislature honored Mitchell for his many accomplishments, which extended far beyond the gas patch (see Shale Daily, May 15).

“Texas has lost a true giant and innovative leader in the oil and gas industry today,” said Texas Railroad Commission Chairman Barry Smitherman on Friday. “Our thoughts and prayers go out to the Mitchell family in their time of loss.

“Because of Mitchell’s persistence in pursuing for years the development of hydraulic fracturing and horizontal drilling in North Texas’ Barnett Shale, we are today witnessing an unprecedented boom in domestic energy production and the associated economic benefits in Texas and nationwide.”

The Texas Independent Producers and Royalty Owners Association, TIPRO, called Mitchell the “father of fracking.” Mitchell, who once was TIPRO’s chairman, “was a true pioneer for the U.S. oil and natural gas sector,” said TIPRO President Ed Longnecker. “We thank him for his many contributions, positive impact and related efforts to strengthen and support this important industry.”

In the 1970s Mitchell created and helped to develop The Woodlands, a 27,000-acre master-planned community about 27 miles from Houston, which he later sold for $543 million. Mitchell also spent nearly $50 million of his personal fortune to redevelop more than a dozen landmarks in Galveston, including the Hotel Galvez, where he and Cynthia were married, and the historic Strand district, once the major business hub and now home to restaurants and boutiques.

Mitchell also founded and funded the Houston Advanced Research Center, a nonprofit research consortium based in The Woodlands. He also donated millions to Texas A&M, where the engineering school is named for him, and to the University of Houston.