Gastar Exploration Inc. said it plans to spud a second test well targeting the Meramec formation within Oklahoma’s stacked shale plays after encouraging results from its first test well showed the formation extended farther to the northeast than previously thought. 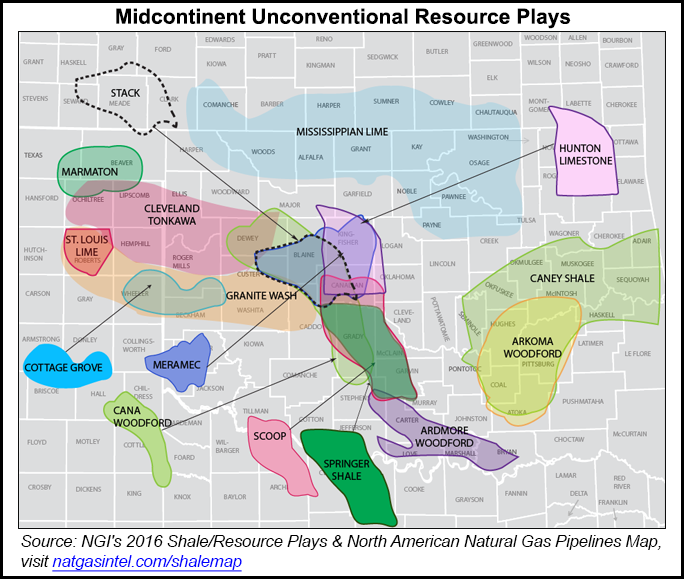 The Houston-based independent said Tuesday its Deep River 30-1H well — its first to target the STACK (Sooner Trend Anadarko Canadian and Kingfisher) play — produced at a gross post initial production (IP) 30-day average sales rate of 956 boe/d, with 68% weighted to oil. The well, located in Kingfisher County, commenced flowback last October and produced at a peak 24-hour rate of 1,094 boe/d (71% oil) in December (see Shale Daily, Dec. 17, 2015). The company has a 100% working interest and an 80% net revenue interest in the Deep River well.

Gastar said its independent reservoir engineer estimated that the Deep River well’s ultimate recovery (EUR) totaled 705,000 boe at the end of 2015, with 50% weighted to oil on a wet gas basis. CEO J. Russell Porter said the EUR was 40% above the high-end of the company’s pre-drill estimates.

“We plan to continue to delineate our acreage to de-risk our Meramec position and are confident that this play can generate acceptable returns even with today’s commodity prices,” Porter said in a statement. Gastar later added that the Deep River well “moved the productive outline of the Meramec play further northeast than previously defined.”

The company said it plans to spud a second test well, the Holiday Road, in February. The second well will also be in Kingfisher County, drilled at a location approximately four miles north and three miles east of the Deep River well.

In a note Tuesday, Jason Wangler, an analyst with Wunderlich Securities Inc., repeated his assertion from December that Gastar’s success in the STACK play could raise the possibility of the company becoming a pure player there — if it sells its assets in the Appalachian Basin. Gastar has been marketing its Appalachian assets since last October (see Shale Daily, Oct. 15, 2015).

“If a sale can be completed, this should unlock ample cash, repay bank debt, and create a pure play STACK player that so far has shown solid results,” Wangler said. “Recall the sale process has been ongoing for a few months and the expectation is to hear an announcement soon.”