The extent of the risks associated with development of shale oil and natural gas is “unknown” because existing studies have not taken into account the potential long-term, cumulative effects of the activity, according to a new report issued by the Government Accountability Office (GAO) Tuesday. The agency in a companion report did not make any recommendations to change environmental and public health requirements in light of advances in horizontal drilling and hydraulic fracturing (fracking). 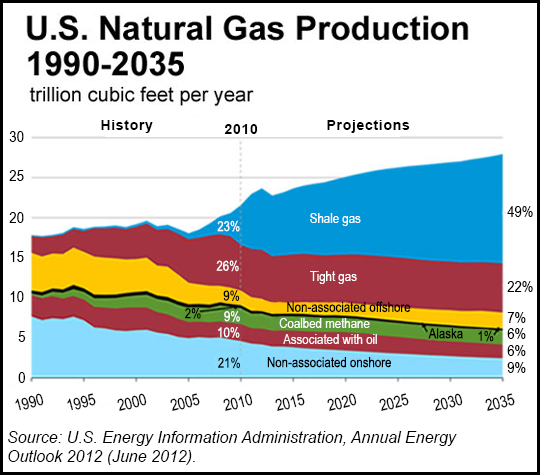 The GAO, which completed the two studies in September, provided copies of the report to the Department of Energy, the Department of Interior and the Environmental Protection Agency, but it made no recommendations.

The GAO said it had reviewed several studies that found that shale oil and gas development poses risks to air quality “generally as the result of engine exhaust from increased truck traffic; emissions from diesel-powered pumps used to power equipment; gas that is flared or vented for operational reasons; and unintentional emissions of pollutants from faulty equipment or impoundments — temporary storage areas.”

Similarly, it noted that a number of studies and publications it reviewed have indicated that shale development “poses risks to water quality from contamination of surface water and groundwater as a result of erosion from ground disturbances, spills and releases of chemicals and other fluids, or underground migration of gases and chemicals.”

Shale development also “poses a risk to land resources and wildlife habitat as a result of constructing, operating and maintaining the infrastructure necessary to develop oil and gas; using toxic chemicals; and injecting fluids underground,” said the 70-page the report, which was requested by Congress.

However, “the extent of these risks is unknown,” the GAO said. “The extent and severity of environmental and public health risks identified in the studies and publications GAO reviewed may vary significantly across shale basins and also within basins because of location- and process-specific factors, including the location and rate of development; geological characteristics, such as permeability, thickness and porosity of the formations; climatic conditions; business practices; and regulatory and enforcement activities.”

In addition to attempting to quantify the risks, the agency was asked to determine the size of shale oil and gas resources, and the amount produced between 2007 through 2011. The Energy Information Administration (EIA) in July reaffirmed that the amount of technically recoverable shale gas in the United States is estimated at about 483 Tcf, an increase of 280% from its 2008 estimate (see Shale Daily, July 24).

“However, according to EIA and USGS [U.S. Geological Survey] officials, estimates of the size of shale oil and gas resources in the United States are highly dependent on the data, methodologies, model structures and assumptions used to develop them. In addition, less is known about the amount of technically recoverable shale oil than shale gas, in part because large-scale production of shale oil has been under way for only the past few years,” the GAO said. According to the report, “shale oil production increased more than five-fold from 2007 to 2011; and shale gas production increased more than four-fold from 2007 to 2011.”

The GAO also issued a separate report Tuesday, which found that both conventional and shale production enjoy key exemptions from a number of federal environmental and public health laws. However, despite concerns raised in some quarters about fracking and other advances in drilling techniques, the agency did not recommend any changes.

It identified some of the exemptions for oil and gas. The Clean Water Act “generally regulates stormwater discharges by requiring that facilities associated with industrial and construction activities get permits, but the law and its regulations largely exempt oil and gas well sites.

“In addition, oil and gas exploration and production wastes are exempt from RCRA [Resource Conservation and Recovery Act] hazardous waste requirements based on a regulatory determination made by the Environmental Protection Agency in 1988,” the report said.

Federal and state agencies reported several challenges in regulating shale oil and gas development, according to the GAO. “EPA reported that conducting inspection and enforcement activities and having limited legal authorities are challenges.” Agency officials noted that the exclusion of exploration and production waste from the hazardous waste regulations under RCRA significantly limits its role in regulating these wastes, the GAO report said.