The Freeport liquefied natural gas (LNG) export terminal in Texas is expected to be offline for at least three weeks after an explosion rocked the facility Wednesday morning, dealing a blow to a global gas market already short on supplies. 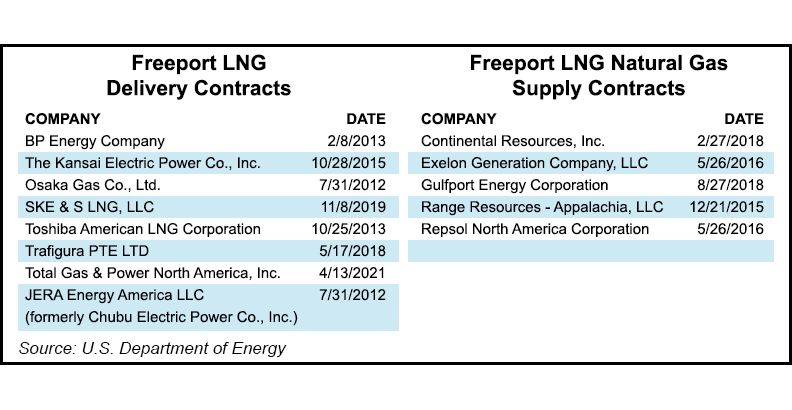 State and federal agencies, including the Pipeline and Hazardous Materials Safety Administration, are aiding Freeport LNG Development LP in an investigation to determine what caused the accident. A spokesperson for the U.S. Environmental Protection Agency noted that state and local agencies had not requested its assistance.

The company has taken over incident command, according to state regulators. Freeport spokesperson Heather Browne said the company would not comment on the extent of the damage, where the blast occurred, or how its commercial operations were impacted. She confirmed that the plant would be offline for a minimum of three weeks. No injuries were reported.

NGI data showed that feed gas nominations for the terminal plunged from about 2 Bcf ahead of the incident on Wednesday to 162 MMcf Thursday. Bloomberg also reported that the terminal had declared force majeure.

The company’s estimate for the duration of the outage may be optimistic. Video of the explosion, which was brought under control within hours, along with satellite footage, showed that it occurred near the facility’s storage tanks – closer to where vessels are loaded.

“I am assuming the facility is out for 90 days as a worst case scenario, based on the location of the explosion/fire and the time it took to get under control,” said Analytix.AI’s Het Shah. “The issues look far from the three liquefaction trains, and more related to an inlet pipe to one of the storage tanks.”

In a Thursday filing with the Texas Commission on Environmental Quality, Freeport said it was forced to shut down all three trains because of a fire in the liquefaction delivery system. The outage resulted in venting off pollutants.

The company also noted in the filing that shutting down the liquefaction trains included compressors typically used to send boil-off gas from the liquefaction facility to the pretreatment facility. Freeport said pressures would be maintained in the trains until repairs were made, which could result in additional venting to the flare system.

The facility on Quintana Island, about 65 miles southeast of Houston, produces 2 Bcf/d of LNG, putting it among the top three largest U.S. liquefaction terminals, along with Corpus Christi LNG and Sabine Pass LNG. It had been running near capacity over the last month after undergoing maintenance on Train 1 this spring.

Kpler’s Laura Page, a senior LNG analyst at the data and analytics company, said the outage is likely to have a negative impact on the global gas market. The plant supplies roughly four or five cargoes each week, she said. From January 2021 through May, Freeport shipped 19.1 million tons of LNG overseas, or roughly 18% of all U.S. exports, according to Kpler data.

“We expect the market to tighten over the coming weeks and months, as cooling demand in northeast Asia picks up, and the likes of South America and the Middle East witness a seasonal ramp up in imports,” Page told NGI.

She also noted the outage is a blow to Europe, which has become “very reliant on LNG to refill its underground storages amid lower Russian pipeline supplies.”

According to the Energy Information Administration, Europe received 74% of all U.S. LNG cargoes during the first four months of this year.

That trend was evident in European markets Thursday, following a six-day losing streak, when the benchmark Title Transfer Facility (TTF) shot upward on news of the Freeport outage. TTF gained nearly $1.50 to finish above $26/MMBtu Thursday.

The incident has had the opposite effect in the United States, where Henry Hub futures had plummeted as traders baked in the loss of demand from the export terminal. The U.S. benchmark shed 60 cents Wednesday after the explosion and hit an intraday low of $8.01 Thursday, before rebounding.

Futures headed higher after the Energy Information Administration reported a 97 Bcf injection into natural gas storage inventories for the week ending June 3. That missed a triple-digit build and gave support to prices. The July Henry Hub contract gained 27 cents to finish at $8.96/MMBtu on Thursday.

Analysts at Goldman Sachs Commodities Research led by Samantha Dart also noted that if the Freeport outage were to be less than a month, the impact on U.S. gas balances could be more than offset by the recent strength in demand for gas-fired power. Hotter-than-normal weather is forecast later this month.

The Goldman team noted that while Freeport could possibly help the export market by loading vessels from its storage tanks in the near term, the global market would feel the impact of a prolonged liquefaction outage.

Shah told NGI that, depending on the length of the outage, anywhere from 44 Bcf to 182 Bcf could make its way into depleted U.S. storage inventories, which may slow the recent rise in prices.

Some traders in Asia told NGI early Thursday that they were girding for a jump in Asian and European benchmarks as buyers would be looking to replace Freeport cargoes from limited supplies. The facility has long-term supply contracts with buyers in Japan and South Korea, along with a trading house and major portfolio players that serve demand across the globe.

The outage also comes as other LNG terminals and pipelines are undergoing maintenance. Facilities in Norway are offline this week for work, while Russia’s Gazprom PJSC announced that the TurkStream and Nord Stream 1 pipeline systems serving Europe are to undergo maintenance from June 21-27 and July 11-20, respectively.

Yawger said in a note to clients Thursday that the National Oceanic and Atmospheric Administration expects 14-21 named storms this year, of which 6-10 could become hurricanes. With one terminal already out, a hurricane-induced supply disruption along the Gulf Coast would squeeze the market further.

Jacob Dick and Leticia Gonzales contributed to this story.