The cold snap earlier this winter in Asia and Europe that sent prices skyrocketing and buyers scrambling for liquefied natural gas (LNG) cargoes was an indication that the global market is becoming too reliant on spot deliveries, said Freeport LNG CEO Michael Smith. 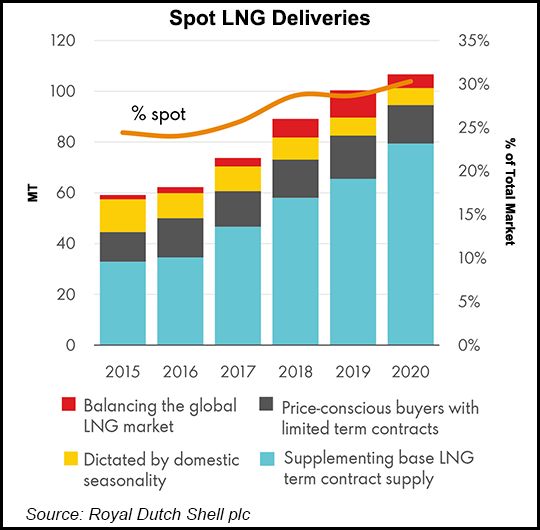 “There’s been an overreliance on spot cargoes in our industry,” he said Wednesday at CERAWeek by IHS Markit. “Spot cargoes are here to stay. They’re great; they help diversity of supply, but if you’re a utility, security of supply is the most important thing. You just need some long-term contracts. In a balanced portfolio, you can’t just live on spot.”

Indeed, spot cargoes accounted for more than 30% of all deals last year, up from about 15% in 2015, according to one of the world’s largest LNG traders, Royal Dutch Shell plc. Spot trading has increased as more buyers and sellers have entered the market. It has helped liquidity at trading hubs across the world as the market was long governed by rigid long-term contracts.

Smith, also the founder of the Freeport export terminal in Texas, said the market is taking note of this winter’s volatility. He said the company is seeing increased interest from buyers regarding long-term contracts for offtake from Freeport’s Train 4 expansion, which would boost capacity by 5 million metric tons/year (mmty) to a total of more than 20 mmty.

Smith also touched on the brutal cold that hit the usually temperate South last month and created an energy crisis that impacted Texas in particular after widespread power outages.

Buyers that source their natural gas for liquefaction under Freeport’s tolling model were able to sell gas into markets in the South at steep premiums, Smith said, as natural gas was selling for hundreds of dollars in Texas and at one point more than $1,000/MMBtu in Oklahoma.

This year’s volatile stretch for the LNG market followed a low point last year when prices nosedived amid a supply glut and lackluster demand during the pandemic. U.S. offtakers cancelled more than 100 cargoes last summer during the downturn under contractual provisions that generally allow them to do so up to 60 days before loading. The market started to recover toward the end of 2020 during what Smith said was a very unusual year.

“Because of this flexibility, I believe the U.S. should be part of any buyer’s long-term portfolio in order to deal with the volatility we saw last year,” Smith said. “However, I do believe that last year was unique with new supply coming onstream early in the year, combined with unprecedented demand destruction early in the year, followed by record demand.”

The United States has driven LNG supply additions in recent years and is now the world’s third largest exporter. Freeport brought on its third train last May.

In Louisiana’s Cameron Parish, Venture Global Inc. is nearing the finish line on its 10 mmty Calcasieu Pass LNG facility, which would be the Lower 48’s seventh export terminal.

Venture Global CEO Michael Sabel also told CERAWeek attendees that the company recently installed its fifth and sixth liquefaction trains. Ultimately, 18 trains are planned to be installed. Sabel said the seventh and eighth trains are to be installed in the next few weeks.

The terminal is using smaller, or modular, liquefaction trains that are pre-fabricated and delivered for installation, which Sabel said has helped cut project costs. He added that peak construction, with about 3,000 workers on site, is expected to end in the next month.

Bloomberg reported last week that Calcasieu Pass is already offering cargoes for loading between this October and December 2022.