An area of colder-than-normal ocean water east of Newfoundland could throw a curve ball into the forecast, but AccuWeather forecasters believe the 2016 Atlantic hurricane season could be more active than usual, with a total of 14 named storms, eight of them hurricanes, including four major hurricanes (Category 3 or higher).

As many as three of those named storms are expected to make landfall in the United States, the forecasters said Wednesday.

WeatherBell Analytics’ forecaster Joe Bastardi also expects a slightly above normal Atlantic hurricane season, with 11-14 named storms, six to eight of them hurricanes, and two to five of those major hurricanes.

“We are most concerned about activity in the Gulf of Mexico and western Caribbean this year,” Bastardi said. “While we haven’t had a landfalling major hurricane since 2005, the longer range patterns suggest that there is a greater than average chance that a major hurricane will hit the U.S. Coast this year.”

It will be that “cold blob” of seawater in the North Atlantic that may determine the relative strength of the 2016 hurricane season, AccuWeather said.

“If the cooler water migrates southward across the eastern Atlantic, then westward into tropical breeding grounds, it will lower sea-surface temperatures over the region where 85% of Atlantic tropical systems develop,” AccuWeather said. “Another possibility is that the water from the cold blob could alter the makeup of deep ocean currents and affect the salinity of the water. If this happens, the pattern of warming waters that has been occurring since 1995 will reverse, leading to a period of cooling.”

Either scenario would limit tropical development in the Atlantic Basin. If neither scenario occurs, sea-surface temperatures would remain mostly warmer than normal, and the 2016 hurricane season would likely be more active than the past three years. That, in turn, would increase chances that the current El Nino event — warmer-than-average sea surface temperatures in the central Pacific Ocean near the equator — would weaken, leading to a neutral pattern by the end of the spring or early summer.

“The big question is whether we will go into a La Nina, which is what we’re anticipating right now,” AccuWeather forecaster Dan Kottlowski said. La Nina events are characterized by cooler-than-normal ocean water temperatures in the Pacific, and are believed to increase the potential for a higher-than-normal number of tropical systems in the Atlantic.

Many weather forecasters, including the National Oceanic and Atmospheric Administration (NOAA), are predicting a 40% chance of a La Nina event developing by fall (see Daily GPI, March 2).

“Historically, some hurricane seasons that have followed a transition from El Nino to La Nina have been very active. It’s possible we could flip from one extreme to the other, from below-normal seasons the past three years to an above-normal year in 2016,” Kottlowski said.

A combination of fewer tropical storms and a lessening reliance on Gulf of Mexico (GOM) production (thanks to the growth of production out of inland shale plays) has kept hurricane-related damage to the nation’s energy infrastructure and markets to a minimum in recent years. 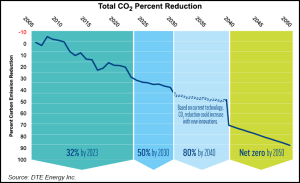 North American natural gas buyers are ready to embrace low-carbon options for their customers, but executives said they are wary about the dearth of regulatory mandates, which could determine which direction to take. Reducing the carbon footprint is a worthy goal, said DTE Gas Co.’s Eric Schiffer, principal marketing specialist for the DTE Energy Co.…