The price of natural gas for delivery next month nosedived on Thursday as traders took profits after a massive four-day rally. The February Nymex gas futures contract settled at $4.270/MMBtu, down 58.7 cents day/day. March dropped 32.2 cents to $4.005. 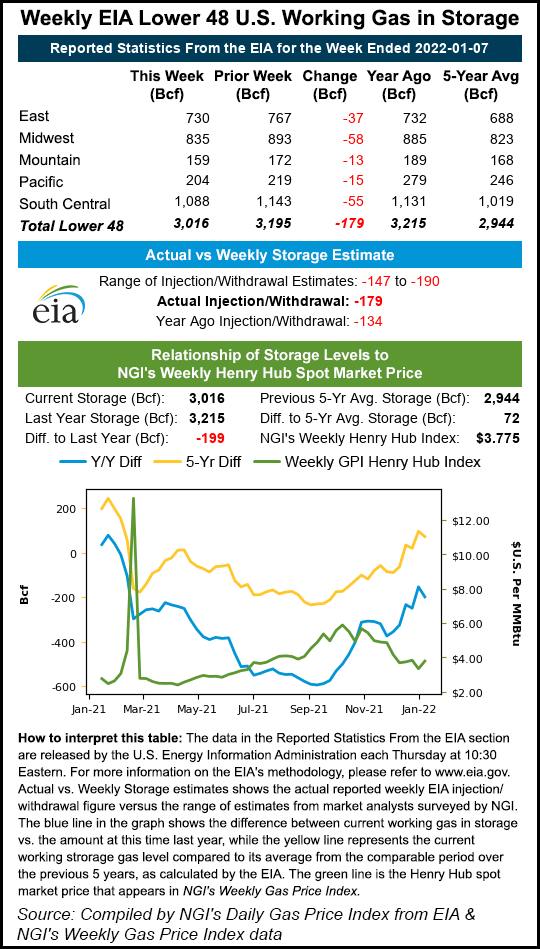 The prompt month on Wednesday had soared 60.8 cents, capping a multi-session bull parade that took futures to a 2022 high near $5. Modest production levels, robust demand for U.S. exports of liquefied natural gas (LNG) and expectations for an extended bout of frigid weather later this month combined to fuel the rally.

Production, however, climbed about 2 Bcf over the past couple days and reached 95 Bcf on Thursday, according to a Bloomberg estimate. That put output back near 2021 highs after freeze-offs early this year curtailed producer activity.

“We also had some speculative buying ahead of Thursday’s storage report that probably made Wednesday’s surge a bit overdone,” Blair said.

The U.S. Energy Information Administration (EIA) on Thursday reported a pull of 179 Bcf natural gas from underground inventories for the week ended Jan. 7, the largest so far this winter.

The result was in line with market expectations. However, Blair said that, following harsh winter weather last week, some in the market had bet on an even larger withdrawal and bid up futures in advance of the report. When the EIA print essentially matched the midpoint of analysts’ estimates in major polls, speculators likely sold off some of their positions, adding to profit-taking already underway.

“So it didn’t surprise me to see the selling,” Blair said.

Analysts had anticipated the hefty draw from storage, given bitter cold conditions over the Midwest and Plains that fueled robust heating demand during the covered week. The winter conditions stretched as far south as Texas, where hard freezes in the Permian Basin forced producers to curtail output.

By region, the Midwest led with a pull of 58 Bcf, according to EIA. The South Central followed closely with a withdrawal of 55 Bcf.

The latest pull decreased inventories to 3,016 Bcf, leaving stocks below the year-earlier level of 3,215 Bcf but above the five-year average of 2,944 Bcf.

Will Bulls Burst Back?

Looking ahead, analysts on The Desk’s online energy platform Enelyst said they expected several more large withdrawals with coming EIA reports. They cited freezing conditions early this month and forecasts for the coldest weather of the season to date during the final third of January. The expected chill could necessitate elevated heating needs as well as more freeze-offs in gas-producing basins, said Refinitiv analyst Shuya Li.

Li noted that power sector demand as well as steady calls for U.S. exports could also influence coming withdrawal levels. “Our current forecasts point to at least three or four 200-plus draws in the next few weeks,” the analyst said.

Blair agreed, noting National Weather Service (NWS) forecasts for harsh winter weather throughout the nation’s midsection and much of the East over the final third of January. What’s more, he said, U.S. LNG feed gas volumes have this week hovered around 13 Bcf, near a record. Supply-starved Europe is clamoring for American gas and fueling the demand.

“Between the LNG momentum and the cold we have coming – which could result in more freeze-offs and another hit to production – I think this market could come back strong,” Blair said.

A fresh round of snow and cold was expected by the weekend over the northern United States. NWS forecasts then called for a brief reprieve before an Arctic blast descends from Canada around Jan. 20. It could linger throughout the Midwest, Plains and East through the end of the month, permeating major markets across half the country with subzero lows.

“It remains a much colder forecast compared to normal, with a strong trough still expected to impact the eastern half of the nation into the final third of the month,” Bespoke Weather Services said Thursday. The “intensity of cold can ease right around month-end,” though weather models at that point “are not close to being back warm, by any means.”

Bespoke said it would “watch for the return of the more classic La Niña base state (cold shifting back west, with some warmth into East) as we get into February, but that is too far out to carry much confidence, and there is still a good deal of colder weather to wade through before getting that far.”

California, where mild temperatures reigned, proved an exception to the rule on Thursday. SoCal Citygate shed 26.0 cents to $5.285 and SoCal Border Avg. lost 31.5 cents to $5.000.