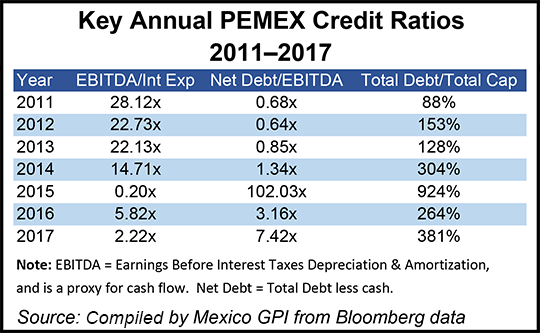 “Today’s downgrades reflect the continued deterioration of Pemex’s standalone credit profile (SCP) to ”CCC’ from the previous assessment of ”B-” as a result of persisting negative FCF [free cash flow] and material under-investment in the company’s upstream business,” Fitch said.

The action by Fitch follows a Jan. 18 explosion at a Pemex-owned gasoline pipeline in Hidalgo state that had claimed 115 lives as of Wednesday. The explosion resulted from an illegal pipeline tap by “huachicoleros,” or fuel thieves, who are thought to have stolen some 66 billion pesos ($3.4 billion) worth of fuel from Pemex pipelines in 2018 alone, more than double the 2016 amount, according to CEO Octavio Romero Oropeza.

In the days leading up to the explosion, multiple pipelines had been shut down amid a government crackdown on fuel theft, leading to widespread gasoline shortages. Many victims of the explosion had reportedly flocked to the site of the leak in order to collect gasoline that gushed from the ruptured pipe.

In addition to hemorrhaging money due to fuel theft, Pemex’s crude oil production has been plummeting since 2004, while natural gas output has been in decline since 2009.

Fitch expects production and hydrocarbon reserves “to continue declining over the medium term and to potentially stabilize after three to five years as current capex [capital expenditure] is insufficient to replenish reserves.

“Recent discoveries, namely Ixachi, which added an estimated 1.3 billion boe of 3P reserves, may help offset somewhat the company’s production and reserve decline but are not enough to reverse the declining trend.”

Fitch said it is projecting negative free cash flow of between $3 billion and $4 billion in both 2018 and 2019 for the 100% state-owned oil company, adding, “this deficit is understated and Fitch estimates that it would be between $12 billion to $17 billion higher if Pemex were investing at a level that would stabilize its production.”

Pemex, which is widely cited as the world’s most indebted oil company, “has been technically insolvent since 2009 by having a negative total equity balance,” Fitch said.

In a Wednesday morning press conference, President AndrÃ©s Manuel LÃ³pez Obrador dismissed credit ratings agencies as “hypocritical,” and said that Pemex is in better shape now than at any point in the last 30 years.

Legislators approved a 464.6 billion peso ($24.2 billion) budget for Pemex in 2019, up 14% in peso terms from the 407.1 billion pesos allocated in 2018. Approximately 11% of the 2019 total is earmarked for the engineering, procurement and construction of what would be Pemex’s seventh oil refinery in Dos Bocas, Tabasco state.

LÃ³pez Obrador has tagged the estimated cost of the refinery at around $8 billion with a construction period of three years. However, local paper Reforma reported Wednesday that in the best-case scenario, the refinery would cost $14.7 billion and take four years to build, citing analysis by the government’s Instituto Mexicano del Petroleo (IMP).

The project is “financially and technically inviable,” IMP found. The report follows the sanctioning of Pemex by Mexico’s Agencia de Seguridad, EnergÃ­a y Ambiente for environmental damage caused during preliminary works at the site.

Fitch said that Pemex’s deteriorating SCP is due in large part to the company’s onerous tax burden, citing that Pemex has historically supplied 25-30% of the government’s revenue.

The finance ministry this week announced a series of measures designed to ease that burden, including raising the limit on tax-deductible E&P costs, and implementing a new fiscal scheme for projects that involve secondary and tertiary recovery techniques.

However, these measures proved insufficient to preempt the downgrade by Fitch. What’s more, Pemex’s budgetary and fiscal constraints are not the only challenges facing the company.

Fitch said that it “considers Pemex’s corporate governance weak given the continued high level of government interference in the company’s strategy, financing and management changes with changes in administration.”

A recent bill proposed by LÃ³pez Obrador’s Morena coalition would only exacerbate this problem, Fitch said, by transferring more power from Pemex’s board of directors to the executive branch.