Even as an administrative process is ongoing to hammer out new state rules on hydraulic fracturing (fracking) by oil/gas regulators, the California Senate on Thursday passed on a 27-11 vote a measure (SB 4) to cover chemical disclosure requirements and public notice before fracking can take place. It drew short, at the industry’s urging, of placing any moratorium on the practice for an interim period. 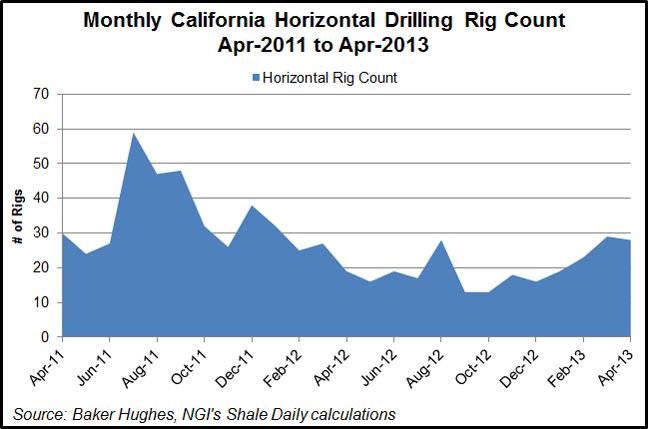 SB 4 goes to the lower house Assembly where its fate is not known, although like the Senate, the Assembly has a super-majority of one party, Democrats, to go with the state’s Democratic Gov. Jerry Brown.

The author of several drilling measures that failed to pass in recent years, Pavley said she and her state Senate colleagues want to “hold oil well operators accountable and answer critical questions about groundwater quality, water supply, earthquakes and air quality.” The veteran state legislator said she wants to protect Californians from “risks to our economy, health, safety and environment.”

Pavley said California has lagged other states, such as Wyoming and Texas, on the issue. “The industry has argued that fracking has occurred in California for decades without incident, but few records exist that could verify or refute such as claim.”

The state lawmaker is characterizing SB 4 as “ushering in a new era of accountability and transparency” in the oil/gas sector.

A number of other legislative proposals regarding drilling or fracking are in various stages of development in both houses of the state legislature. Since the state lawmakers are scheduled to stay in session through August, this is still considered early in the normal legislative process.

Three of the drilling/fracking proposals moved ahead earlier in May that if enacted would place a moratorium on hydraulic fracturing, as well as review oil and gas drilling practices (see Shale Daily, May 3).

Two of the bills (AB 1301 and 1323) would impose a moratorium on fracking while more review and study is done. AB 649 and AB 1323 both also call for creating an advisory committee to review health, environmental, economic and other effects.