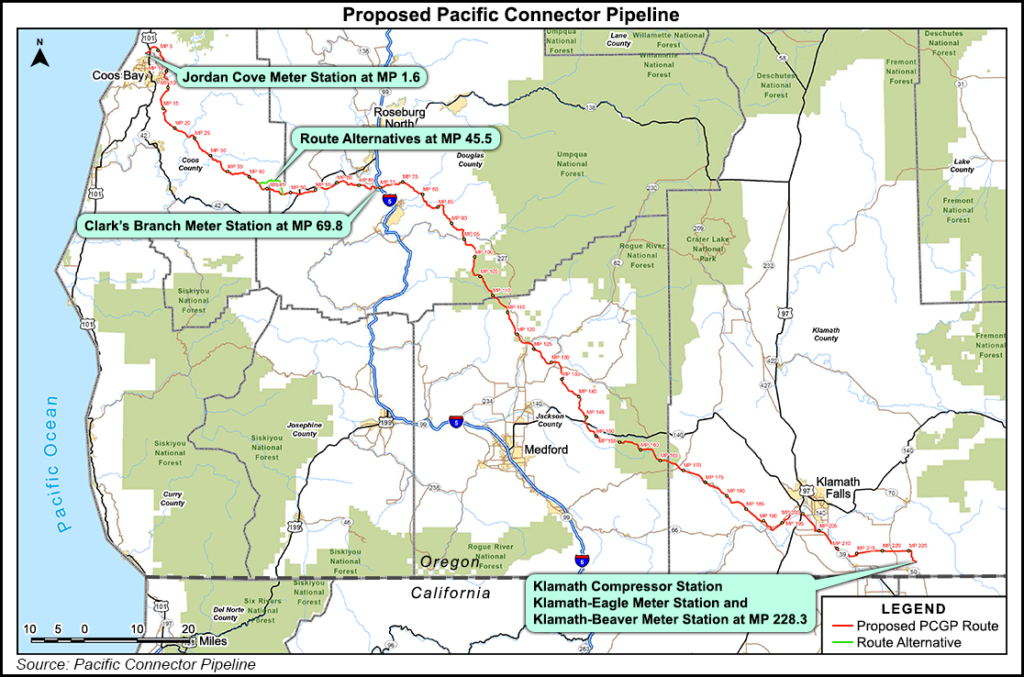 Calgary-based Veresen said it will file for a rehearing of the decision with the Federal Energy Regulatory Commission (FERC) on behalf of both Jordan Cove and the 232-mile proposed connecting pipeline.

“Clearly, we are extremely surprised and disappointed by the FERC decision,” CEO Don Althoff said. “The FERC appears to be concerned that we have not yet demonstrated sufficient commercial support for the project, and we will continue to advance negotiations with customers to address this concern.”

Earlier this month Althoff reported on an earnings conference call that the company was getting closer to having term sheet agreements in place (see Daily GPI, March 11).

In its 25-page denial of the application for the $7.5 billion project proposed for the south-central coast of Oregon, FERC indicated that the public benefits from the proposed Pacific Connector pipeline do not outweigh its potential for adverse impacts on landowners and communities. Last year, FERC delayed a final environmental assessment because of concerns locally over part of the proposed route by the pipeline, Pacific Connector, which is a partnership between a unit of Veresen and the Williams Companies Inc. (see Daily GPI, June 12, 2015).

A spokesperson for Oregon Gov. Kate Brown said that her office is “reviewing FERC’s decision on the Pacific Connector Pipeline and Jordan Cove LNG terminal internally and with the Oregon Department of Justice. “

Brown has not taken a position on the project, and in the past, her spokesperson told NGI on Monday, has said she expects state agencies to follow all laws and regulations “to the letter” when considering any proposed project and that there are opportunities for public input. “These projects are subject to federal approval and a certain amount of local community support as well,” said the spokesperson, adding that Brown has urged citizens to share any concerns with their congressional and local representatives.

FERC determined that Pacific Connector’s evidence of need fell short, given the arguments from the opposition, other potential adverse impacts, and the likely need for federal eminent domain authority to be needed to build the $1.74 billion, 36-diameter transmission pipeline.

“Because the record does not support a finding that the Jordan Cove LNG [liquefaction plant and terminal] can operate to liquefy and export LNG absent the Pacific Connector Pipeline, we find that authorizing its construction would be inconsistent with the public interest,” FERC said.

Christi Tezak at ClearView Energy Partners interpreted FERC’s action as consistent with denials in similar cases, such as a 2011 action denying a certificate to the Turtle Bayou storage facility. “FERC did not move the goal posts; the market moved away from the applicants,” Tezak wrote in an analysis.

The decision confirms “the challenges that LNG export facilities without offtake commitments face in a global gas market [that is] characterized by weak demand, low prices and significant near-term capacity expansion,” she said.

Continuing local opposition, particularly to parts of the pipeline route, and delays in nailing down contracts have plagued the Jordan Cove project in recent years. Early last year, Veresen officials were expecting to have binding agreements with two to four customers to announce in 2015 to replace the nonbinding agreements now in place (see Daily GPI, Feb. 9, 2015). Those deals are still incomplete.

FERC also pointed out that although sponsors claimed there is a need for its project to serve current and future domestic needs, such as providing LNG for isolated markets in Hawaii and Cook Inlet in Alaska, they have yet to file for certification to transport or sell for resale gas in interstate commerce. “The section 3 authorization it has requested extends only to operations in foreign commerce… Jordan Cove would need to apply for and receive authorization under section 7(c) of the NGA prior to processing any gas for transportation in interstate commerce.”

Oregon has a second LNG export project, Oregon LNG, along the mouth of the Columbia River (see Daily GPI, May 15, 2015) that is expecting a final environmental impact statement from FERC by June 3, according to project manager Peter Hansen. The denial of Jordan Cove was based on findings specific to that project and won’t impact his project’s airing by the federal regulators, he said.

“We’re confident that FERC will make a determination regarding our proposals based on the facts specific to our applications and the data we have submitted,” said Hansen, adding that Oregon LNG is on track for a Sept. 1 final authorization from FERC. “We remain committed to meeting or exceeding all applicable environmental standards.”