FERC has pushed back by more than four months the scheduled issuance of a final environmental impact statement (EIS) for the Northeast Supply Enhancement Project by Transcontinental Gas Pipe Line Co. LLC (Transco), which is already entangled in a regulatory quagmire in New York. 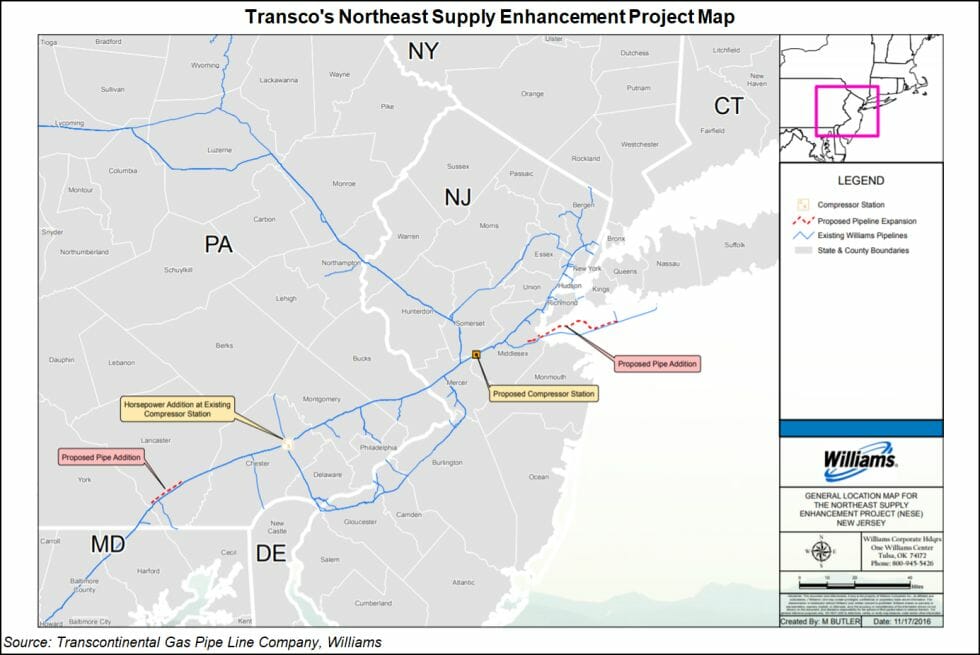 The Federal Energy Regulatory Commission said the final EIS, initially scheduled to be issued next Monday (Sept. 17), has been pushed back to Jan. 25, “based on the current status of Transco’s General Conformity review and feasible mitigation options” [CP17-101].

FERC published a favorable draft EIS in March for the project, which would provide 400,000 Dth/d to residential and commercial customers in the New York City area.

However, Transco’s application for a water quality certification required by the federal Clean Water Act (CWA) and other state permits for the project in New York have been on hold since last summer. Pennsylvania has also been reviewing the project for a Section 401 Water Quality Certification (WQC) under the CWA.

In April, the New York State Department of Environmental Conservation (DEC) denied Transco’s application for a WQC. The application, which was filed in June 2017, was incomplete, according to DEC, which also said that FERC’s ongoing environmental review could result in changes to the project. Transco refiled at the DEC for a WQC in May.

The nearly $1 billion expansion would increase natural gas deliveries to National Grid. The project is designed to create 400 MMcf/d of incremental firm capacity to Northeast markets, primarily to feed gas demand in New York City, which is phasing out the use of No. 4 fuel oil to help curb emissions.

The expansion would include 10 miles of pipe in Pennsylvania, three miles in New Jersey and 23 miles of pipe offshore New Jersey and New York. Of particular concern to the project’s opposition is the 23-mile segment of new pipeline that would cross Raritan Bay from Old Bridge, NJ, to Rockaway Point in Queens, NY.

DEC’s denial in April was the fourth time the agency has rejected a WQC application for a pipeline project.

Williams’ refiling still could face an uphill battle, as Gov. Andrew Cuomo, whose administration banned high-volume hydraulic fracturing in 2015, is facing a heated Democratic primary challenge from actress Cynthia Nixon. She has already called for a ban on gas pipelines and power plants, which appears to be forcing Cuomo farther to the left as he continues to tout his fight against fossil fuels while on the campaign trail.

The New York gubernatorial primary is scheduled for Thursday.