Nine research projects are getting a federal funding boost to advance methods and potentially reduce costs to capture and store carbon from the air, also known as direct air capture (DAC). 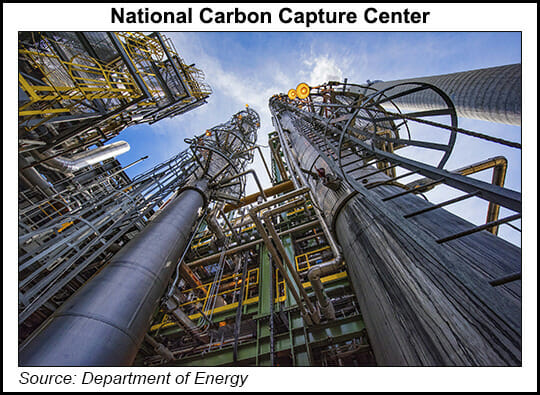 The U.S. Department of Energy (DOE) said it has granted $24 million to universities and national labs across the country. The aim of the projects is to find ways to reduce carbon dioxide (CO2) emissions, a key part of the Biden administration’s goal to achieve net-zero emissions by 2050.

“Finding ways to remove and store carbon directly from the air is an absolute necessity in our fight against the climate crisis,” said Secretary of Energy Jennifer M. Granholm. “This investment in carbon capture technology research through universities and DOE laboratories will position America as a leader in this growing field, create good paying jobs and help make our carbon-free future a reality.”

One of the world’s largest DAC facilities is underway in the Permian Basin by Occidental Petroleum Corp. and its partners. The Permian installation, designed to remove up to 1 million metric tons/year of CO2, is scheduled to begin initial operations in 2024.

The process is expensive, as DOE noted. DAC “still requires significant investments in research and development to create a cost-effective and economically viable technology that can be deployed at scale and in time to meet the urgent needs of the climate crisis,” officials said.

Studies indicate curbing carbon emissions alone will not be sufficient, with innovative approaches like DAC necessary to reduce greenhouse gases. DOE is working to fund a variety of emissions reductions efforts. In June, it awarded an estimated $12 million for six similar DAC projects in Arizona, Kansas, Illinois and North Carolina.

“These new research projects will support breakthroughs in understanding how to overcome the limitations of currently available technologies, including inefficient energy usage, with the goal of building a research foundation of entirely new and more effective approaches for direct removal of CO2 from the air.

The nine new awards are for projects that could last up to three years, led by two national laboratories and seven universities. Funding is centered around discovering novel materials, chemistries and processes to extract emissions from the air. Other research would combine experimental and computational studies on CO2 capture for sequestration or reuse.

The University of Illinois, Oak Ridge National Laboratory and Case Western Reserve University, which were granted $9 million total, plan to advance ways that could use electricity or light to control CO2 capture and/or release.

With a total grant of $6.6 million, North Carolina A&T State University, Oregon State University and Lawrence Berkeley National Laboratory plan to explore new materials and chemical compounds that could have the potential to improve efficiencies for CO2 capture and regeneration.

Northwestern University was awarded $3.3 million to examine how the dynamical behavior of promising carbon capture systems impacts their CO2 capture and release.

The projects were chosen based on peer review under a DOE funding opportunity announcement that was open to universities, national laboratories, industry and nonprofit research organizations.

Natural gas futures could not hold onto early gains Thursday after the latest government storage data failed to generate any buzz in the market. Profit-taking managed to push January Nymex gas futures to a $4.335/MMBtu intraday high early in the session, but with a stubbornly mild weather forecast, the contract eventually settled at $4.056, down…