The natural gas trading landscape is shaping up to be a tale of two markets: a soft near-term February characterized by uninspired bidweek prices offset by analyst predictions of an improved 2017 and 2018. 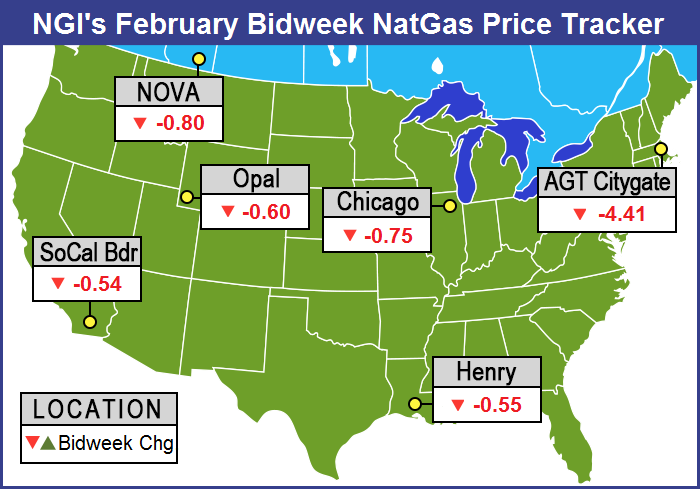 However, no market point followed by NGI for February 2017 came anywhere close to being in the black as a number of individual points around the country lost 50 cents or more.

Blame it on the weather. Regionally, the Northeast came in with the biggest decline with a drop of $2.68 to average $5.10. A close look at January heating requirements shows why. AccuWeather.com reported Boston tallied 919 heating degree days (HDD), or 17% fewer than normal. The average temperature was 35.1 degrees, or 6.1 degrees above normal, and on Jan. 12, the city recorded a high of 61 degrees, 22 degrees greater than normal.

Houston’s experience was similar to Boston’s, only more so. AccuWeather.com reported Houston accumulated only 183 HDD, or one-half its normal January tally, and the average temperature was 61 degrees, 8 above the norm. On Jan. 20, Houston recorded a high of 84 degrees, 19 degrees above normal.

February futures expired last Friday at $3.391, down 53.9 cents from the expiration of the January contract.

“You have a mix between people who can cut back on their storage and go to the cash market, and those who have to empty storage,” said a Midwest marketer working the Chicago market. “It’s really kind of a blend and not affecting the market one way or another. The weather is the true driver and it’s pretty mild everywhere.

“Historically you still have very cold days in February, so they save storage gas for stuff like that, and others have to pull it because some accounts have to have it down to zero by the end of March.”

Others were not happy even with the lower quotes.

“We didn’t like the prices, said a Michigan marketer. “We had to adjust around the market because people use less. It was a great deal warmer than anticipated, and we backed off our February purchases,” he said.

A Nebraska municipal buyer said, “We didn’t buy much. We are so long on storage and the forecasts we are seeing for February show it will probably be warmer if not quite a bit warmer. We are planning to stay a little short going into the month, maybe 2 1/2% below where we would normally be.”

“We’ve had pretty mild temperatures here last week so someone took the report as bullish,” said a New York floor trader. “We were looking at $3.44 to $3.45 just before the number came out.”

“The 119 Bcf net withdrawal for last week was nearly in line with the consensus expectation and so neutral on that score,” said Tim Evans of Citi Futures Perspective. “At the same time, however, this was a big step down from the 243 Bcf drop in the prior week and below the 176 Bcf five-year average, and so bearish on a seasonally adjusted basis.

“Storage remains at a relatively comfortable level, 20 Bcf (0.7%) below the five-year average as we approach the midpoint of the winter on Groundhog Day, Feb. 2.”

BMO Capital Markets analyst Randy Ollenberger said the storage report “will be viewed as neutral. Storage has dropped to five-year average levels, and we believe that U.S. working gas in storage could trend toward five-year lows by the end of the 2017 winter withdrawal season, assuming normal weather.”

Inventories now stand at 2,798 Bcf and are 348 Bcf less than last year and 20 Bcf less than the five-year average. In the East Region, 43 Bcf was withdrawn and the Midwest Region saw inventories decrease by 38 Bcf. Stocks in the Mountain Region fell 10 Bcf, and the Pacific Region was down 13 Bcf. The South Central Region dropped 15 Bcf.

As bidweek drew to a close Tuesday, physical and financial natural gas values tumbled to weather-driven double-digit declines for the second day in a row.

Natural gas cash for Wednesday delivery traded unchanged or sharply lower at all but one market point, and the NGI National Spot Gas Average shed 16 cents to $2.97. New England points took the greatest hits, but major trading centers from coast to coast came in sharply lower.

Futures prices couldn’t get out of their own way either as longer-dated forecasts also showed considerable moderation. At the close Tuesday, March had dropped 11.5 cents to $3.117 and April had given up 10.6 cents to $3.165.

“Sizeable day-to-day changes were made to the six-10 day period forecast,” said WSI Corp. in its Tuesday morning report. The eastern two-thirds of the continental United States (CONUS) “are much warmer than previous forecast, especially for days seven through nine. The West and adjacent portions of the central U.S. are much colder by days seven to 10.”

The warmer changes offset the cold ones, said WSI, so CONUS gas-weighted HDDs were down 9.6 to 121.5 for the period.

“The forecast has risks in either direction at this point given the inconsistency with the models the past few days and with inherent uncertainty with a storm system during the period, which could have a sharp contrast in temperatures. With that said, operational models offer a warmer risk over the East and a colder risk over the West and portions of the central U.S.”

Analysts question whether there is any meaningful cold out to the end of February. In a Tuesday morning note, Jim Ritterbusch of Ritterbusch and Associates said the “sharp price selloff that is into its fourth day is being sustained overnight by continued comparatively mild temperature views that shifted significantly over the weekend.

“These outlooks that are starting to stretch toward mid-February, are beginning to favor a renewed storage surplus situation that could remain intact through most of February. While nonweather factors continue to tilt bullish in accentuating weekly storage withdrawals, weather at this time of year tends to be the overriding driver of price and until another shot of arctic air moves down into the Midcontinent, this market could have difficulty piecing together a meaningful price advance.”

Ritterbusch cautioned that “temperature views can change quickly, and we feel that the next indication of a cold event could easily spike values back up to around this month’s high of about $3.50-3.55.”

A favorable weather spike notwithstanding in the short run, longer-term market dynamics are seen favorable. Higher capital spending by producers, capitalizing on recent higher prices, are implementing more hedging and limiting market exposure for those savvy enough to minimize price risk. Prices are also seen higher than previous estimates for 2017, 2018 and 2019.

Exploration and production (E&P) companies also appear “emboldened” by the decision by the Organization of the Petroleum Exporting Countries (OPEC) to reduce crude output through at least May, said Wells Fargo Securities analyst David Tameron.

“Emboldened by a stronger commodity tape and a firmer outlook for crude post OPEC’s November meeting, the ramp in rig activity is clearly underway. In fact, aggregate rig count has been flat or up in 32 of the past 36 weeks and we believe rig adds are likely to continue as operators focus on ramping production in 2017.”

“2016 came to a close with temperatures substantially below average, driving a 642 Bcf storage withdrawal over the last four weeks of the year, which meaningfully surpassed the five-year average withdrawal of 374 Bcf. The massive withdrawals pushed natural gas prices as high as $3.93/MMBtu (front month) and provided E&Ps with an opportunity to hedge 2017 production at over $3.60/MMBtu.

“We believe to some extent this has already started to show up in 2017 natural gas hedges, which are currently at 47%, a 10% [volume] increase from our prior true-up.”

According to Tameron, prices are forecast to be higher than earlier forecasts.