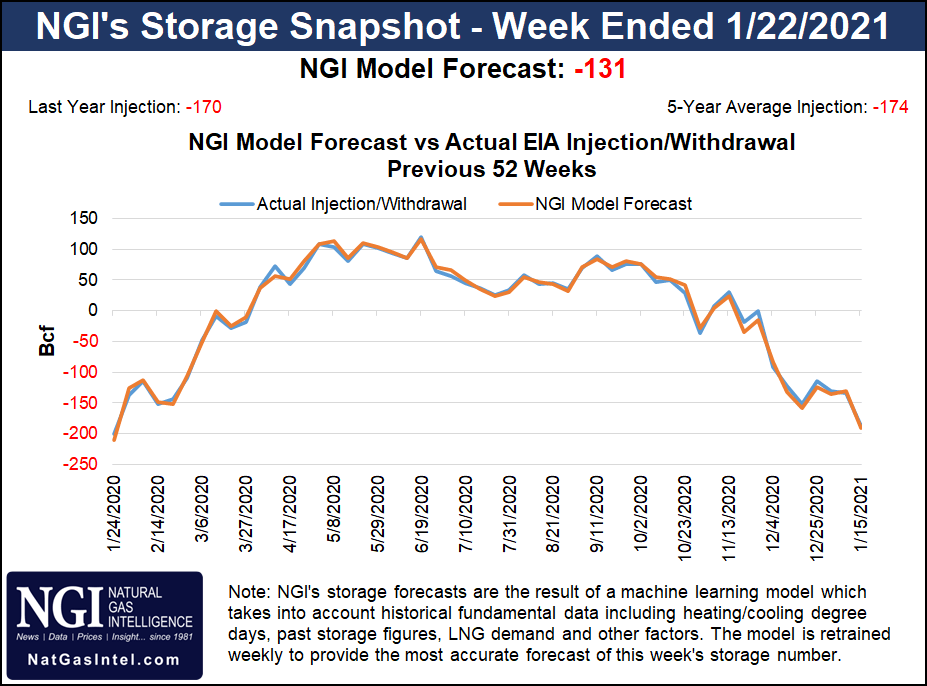 Before rolling off the board on Wednesday, the February Nymex gas futures contract climbed 10.4 cents day/day and settled at $2.760. March, which takes over as the prompt month on Thursday, advanced 6.6 cents to $2.702.

In addition to a widespread blast of cold this week, mid-range weather outlooks have steadily pointed to freezing conditions in weeks ahead.

“Once again, the changes in the weather forecast are to the colder side, enough to now move the 15-day forecast as a whole a little colder even versus the long-term, 30-year normal,” Bespoke Weather Services said Wednesday.

“Much of the colder change the last several days has been centered around more storm-induced variability than projected a week ago, as opposed to a true cold outbreak coming out of Canada,” Bespoke added. “But that narrative changes in the 11- to 15-day period, as a stronger cold air mass is expected to push southward out of Canada into the U.S. Its focus appears to be in the middle of the nation…as opposed to hitting the more populated East and South, though it still looks like enough for a few days of above-normal” demand.

Bespoke also noted that, over the prior two months, markets rallied on contract expiration day, as they did Wednesday. With February’s expiry, the firm said, “the support from the weather changes makes the move quite logical.”

The firm said March’s launch as the prompt month will “depend on the supply/demand balance as well, which we hopefully will learn more about” with Thursday’s U.S. Energy Information Administration (EIA) weekly storage report.

A year earlier, EIA reported a decrease in inventories of 170 Bcf. The five-year average withdrawal for the comparable week is 174 Bcf.

If the polls prove accurate for the latest week, U.S. underground stocks could decrease to around 2,870 Bcf. NGI estimated that inventories would finish the current withdrawal season at 1,859 Bcf.

Strong demand for U.S. LNG exports has helped cut into domestic stocks. While days of heavy fog along the Gulf Coast last week prevented some vessels from entering and leaving LNG facilities, cutting into volumes, export volumes have rebounded this week. They were above 11 Bcf on Wednesday and near record levels.

“The bounce back in LNG export levels after the fog…along with increased demand driven by this cold weather have helped to lift the prompt month,” Wood Mackenzie analyst Anthony Ferrara said.

Meanwhile, even though gas markets have not yet shown any pronounced reactions, traders are paying attention to the evolving energy policy platform in the White House.

As part of a broader plan to get the United States on a path to a carbon-neutral economy by 2050, President Biden has already rejoined the Paris climate accord and nullified a key permit for the Keystone XL pipeline. On Wednesday, he was preparing to sign an executive order pausing new oil and natural gas leasing on federal lands and offshore waters as part of a “comprehensive review” of the program.

On Wednesday, a spike in Northeast prices led the charge as Boston and other major markets in the region braced for three straight nights of low temperatures in the single digits beginning Wednesday night.

Demand was solid across most of the Lower 48, with more of the same expected over the next couple days.

“A strong storm will bring heavy rain and snow to the West the next several days, while a milder system brings mostly rain showers to the Southeast,” NatGasWeather said. “With much of the northern and central U.S. cool to cold” with highs of near zero to 40s the next several days, “national demand will be strong.”

Prices in the West lagged, however, following solid gains a day earlier. In the Rocky Mountains, Kern River shed 12.0 cents to $2.715, while in California, SoCal Citygate dropped 50.0 cents to $3.455.

Wood Mackenzie analyst Joe Bernardi said demand had been elevated in Southern California ahead of Wednesday. He said demand to start this week topped 4.2 Bcf/d, well above the winter-to-date average of 2.8 Bcf/d. “This was its first crest above the 4 Bcf/d mark this year, and only the second since December 2019,” the analyst said.

But conditions warmed slightly and cut demand down closer to norms on Wednesday.

“We are forecasting that the rest of this week will continue to be colder than normal” in Southern California, but “the coldest days of this weather system have now passed.”

On the pipeline front, WhiteWater Midstream and MPLX LP announced Wednesday the completion of a substantial natural gas pipeline expansion in the Permian Basin that delivers gas to the Waha hub in Texas.

The 1.8 Bcf/d Agua Blanca expansion has entered commercial service and connects nearly 20 gas processing sites in the Delaware sub-basin of the Permian. It is transporting gas to Waha hub from Culberson, Loving, Reeves, Pecos, Winkler and Ward counties in Texas, as well as in Eddy and Lea counties in New Mexico.