Exploration and production (E&P) operators in the U.S. onshore are ramping up drilling activity, particularly in the Permian Basin, to offset the shrinking drilled but uncompleted (DUC) well inventory, according to ESAI Energy LLC. 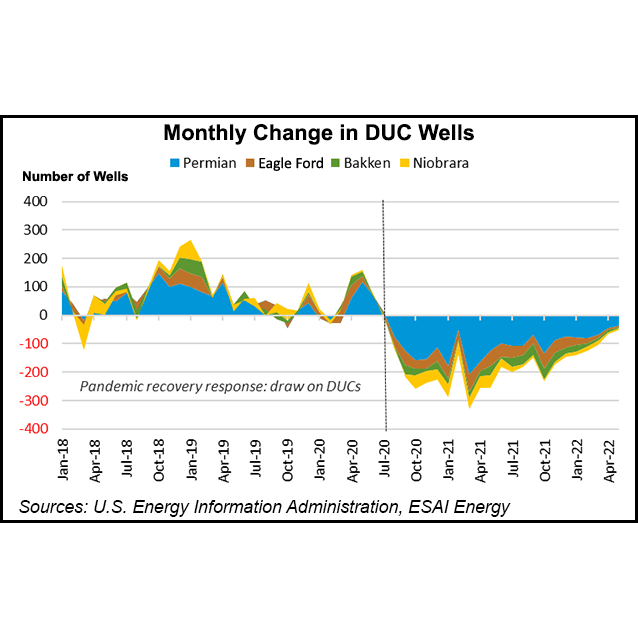 According to the latest U.S. Energy Information Administration (EIA) Drilling Productivity Report (DPR), the Lower 48 DUC count dropped by 46 units to 4,249 from April to May.

Since peaking in June 2020, the DUC inventory has declined 60% as E&Ps maintained a cash-preservation stance and kept drilling subdued, ESAI noted.

The number of “viable DUCs will likely be depleted by year-end, leaving many producers with no choice but to accelerate drilling to keep production levels up,” said the Boston area-based consultancy.

With the Freeport liquefied natural gas (LNG) export facility in Texas offline for months, Murphy told NGI that she sees a potential midstream issue for the natural gas production that would otherwise be destined for the terminal.

“I think the bigger challenge for the feedgas supplying Freeport LNG might be how the pipeline shipment contracts are structured,” she said.

“There may be limited ability from a contracting perspective to switch to other pipelines” to carry Freeport feedgas, said Murphy. “But if they can, shippers will be scrambling to find ways to get the natural gas to other pipes serving other LNG facilities or to other markets. If they can’t then I suppose any surplus would be injected into storage facilities.”

“There is not much room for other LNG facilities to increase utilization to make up for the loss from Freeport as most areas are at or near capacity now,” said Murphy. “The exception may be for the new liquefaction trains that recently started commercial operations.”

New liquefaction plants include Train 6 at Cheniere Energy Inc.’s Sabine Pass facility and “about six of the total 18 trains” starting up at Venture Global LNG Inc.’s Calcasieu Pass facility, which should be fully operational by year’s end, said Murphy.

ESAI also predicted strong production growth in the Permian into 2023 “as the rate of new wells spud has recently begun to rise more than twice as fast as the number of well completions.”

Production growth in other basins, however, could be more subdued, ESAI added. It explained that, barring more rapid rig deployments, the lack of DUCs in those basins could lower completion rates.

EIA’s most recent DPR projects nearly 800 MMcf/d in additional natural gas output month/month from the gassy Appalachian Basin and Haynesville Shale as well as the Permian and other plays.

Notwithstanding lingering supply chain bottlenecks and rising costs for E&Ps that “will continue to drag on growth,” ESAI projected that accelerated drilling would yield an 830,000 b/d increase year/year in U.S. onshore oil production by the end of 2022.

Still, ESAI “currently sees another strong year of production growth from the Permian” next year, particularly if E&Ps raise drilling budgets for the new year.