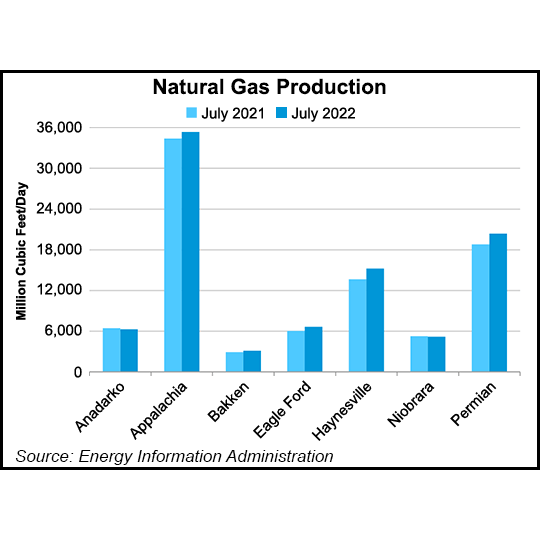 The Appalachia and Haynesville regions are on pace to grow output by 231 MMcf/d and 226 MMcf/d, respectively, from June to July, EIA said in the June edition of its Drilling Productivity Report (DPR), published Monday.

The DPR also models upstream trends for the Anadarko and Permian basins, along with the Bakken, Eagle Ford and Niobrara formations. Combined output from the seven regions is set to grow 781 MMcf/d to 92.282 Bcf/d from June to July, the data show.

Also expected to make notable month/month natural gas gains in the updated DPR are the Permian (up 165 MMcf/d month/month) and the Eagle Ford (up 132 MMcf/d). Only the Anadarko is projected to slow its natural gas output month/month, with production there on track to fall an estimated 10 MMcf/d for the period, the DPR data show.

In other news, the total number of drilled but uncompleted (DUC) wells across the seven regions declined by 46 units to 4,249 from April to May, according to the most recent EIA count. The Permian entered the period with the largest backlog and posted the largest month/month decline in its DUC total at 37. That left the West Texas and Southeast New Mexico play with 1,257 DUC wells as of May, according to EIA.

The Anadarko (down nine), Bakken (down three), Eagle Ford (down five) and Niobrara (down six) regions also posted lower DUC counts from April to May. The Appalachia (up one) and Haynesville (up 13) each added to their respective DUC backlogs.